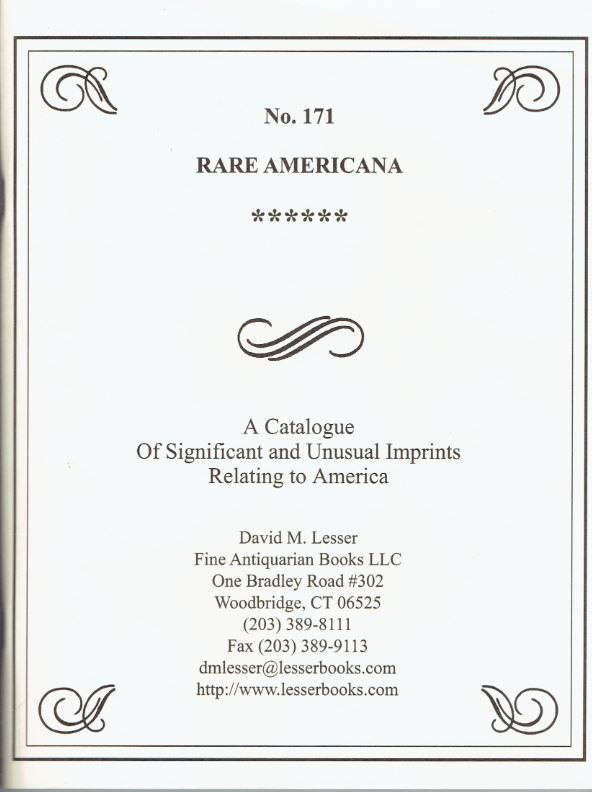 David M. Lesser Fine Antiquarian Books has published a new catalogue of Rare Americana. This is number 171 in their ongoing series. The books, pamphlets, broadsides, cartoons, documents, letters, and photographs document America in the 18th and 19th centuries. This is America as it was, very different from what it is today, yet the issues often are strikingly similar to those faced today. Here are a few of the almost 150 selections offered in this latest catalogue.

Perhaps you think the first European to visit America was Christopher Columbus, or maybe some Scandinavian named “Erik.” Wrong! At least that's what John Williams told us in this book published in 1791. The title is An Enquiry into the Truth of the Tradition, concerning the Discovery of America, by Prince Madog ab Owen Gwynedd, about the Year 1170. Legend held that Madog (or Madoc) was one of a Welsh King's double digits of children. There broke out a scramble among them to be his heir, but Madog wasn't interested in the in-fighting. He was a man of peace and love. So, instead he decided to leave Wales. He gathered up a few boatloads of his friends and they sailed west. Legend has it they landed in America, eventually settling with friendly Indians somewhere in the Midwest, or Great Plains, or Southwest. I don't know how people in Wales would know about this part since he was gone, but some believe he returned once to get more settlers and presumably told his tale. Of course, there are no contemporary reports or archaeological evidence of this, but it became a convenient story when the English were battling the Spanish for the Americas. It provided a sort of legitimacy to their claims. Later on, the story led to numerous searches in North America to find a tribe of Welsh Indians. There were lots of tales of old Indians speaking about white ancestors and some believed certain Indian tongues resembled Welsh. A few even claimed conversations between an old Indian or two and a Welsh speaker. None of these have ever been convincing or backed up by hard evidence and I am not aware of any scholars who believe any of this. DNA testing is now available, but there aren't that many Indians without any later arriving white blood. Item 146. Priced at $875.

In the 1840s, there was an anti-rent movement in New York unrelated to the more recent “Rent is Too Damn High” cause in New York City. This one took place in upstate New York, particularly around the Albany area. Ever since the days when New York was still controlled by the Dutch, the Van Rensselaer family owned vast amounts of land. Known as Rensselaerwyck, the land had long ago been rented out to tenant farmers in a form similar to the old European feudal system. The farmers paid rent and provided services to the Van Rensselaers. In 1839, the latest patroon (as the Dutch owners were called), Stephen Van Rensselaer, died. He had been considered a benevolent patroon, not pushing to collect payments from farmers who could not afford them. However, his will directed his sons to collect back rents, which they attempted to do. Farmers who could not afford the payments risked being kicked off the land their families had farmed for generations, losing all the improvements they had added. Instead, the farmers rebelled. Local and state authorities tried to force them in line but the tenants refused to back down. Item 106 is Manor of Rensselaerwyck, by Calvin Pepper, published in 1846. Pepper was a leader of the anti-rent movement who deliberately cut down a tree in the patroon's woodlot, hoping to start a confrontation. His action was ignored. However, by 1845, the anti-renters had formed their own political party and the Democrats and Whigs sought support from this growing bloc. The result was a new Governor was elected who, unlike his predecessor, was sympathetic to the tenant farmers. Legislation was passed outlawing the feudal system and limiting leases to 12 years. The patroons were forced to sell off their estates. Item 106. $375.

The southern states entered the Civil War with high hopes, but by late 1864, the situation had become desperate for the Confederacy. How desperate? This Message of the President. To the Senate and House of Representatives of the Confederate States of America attests to the level of desperation. Dated November 7, 1864, and signed in type, Jefferson Davis calls for the training of 40,000 slaves for military duty. He goes farther than just that to encourage their participation. Davis says “the relation of person predominates so far as to render it doubtful the private right of property can consistently and beneficially be continued.” If that isn't clear enough, he advocates “engaging to liberate the negro after his discharge” as a “motive for zealous discharge of duty.” While not yet advocating arming the slaves, Davis even leaves that possibility open. He adds, “should the alternative ever be presented of subjugation or of the employment of the slave as a soldier, there seems no reason to doubt what should then be our decision.” Despite the obvious desperation, Davis goes on to claim that although General Sherman had seized Atlanta, he “has been unable to secure any ultimate advantage from this success.” Sure, Jeff. Item 34. $750.

Sherman's victory in Atlanta would lead to this event in April of 1865. Item 16 is a lithograph in red and blue of an American flag with the wording, Victory Will Lead to Peace / The Right Stripe / Richmond Has Fallen. Appomattox was just days away. The artist has drawn this flag with a unique layout of the stars in the blue field. He/she has also missed a fairly recent development. It contains just 34 stars, but West Virginia entered the Union as state number 35 in 1863. Item 16. $1,250.

Despite the North's victory in the war, anything resembling equality was still far away. In 1887, William J. Simmons published this book of 177 prominent African-American men to help former slaves and their offspring learn more about the distinguished people in their heritage. It included Revolutionary War hero Crispus Attucks, anti-slavery leader Frederick Douglass, and even the rebel who struck fear in plantation owners' hearts, Nat Turner. The title is Men of Mark. Progressive and Rising. It includes 106 portraits of the men of mark. Simmons, the President of the State University, Louisville, notes that the Negro race “must possess more intellectual vigor than any other section of the human family” since they were mastering difficult studies with the best of whites despite all the years of being crushed in slavery. Item 120. $1,500.