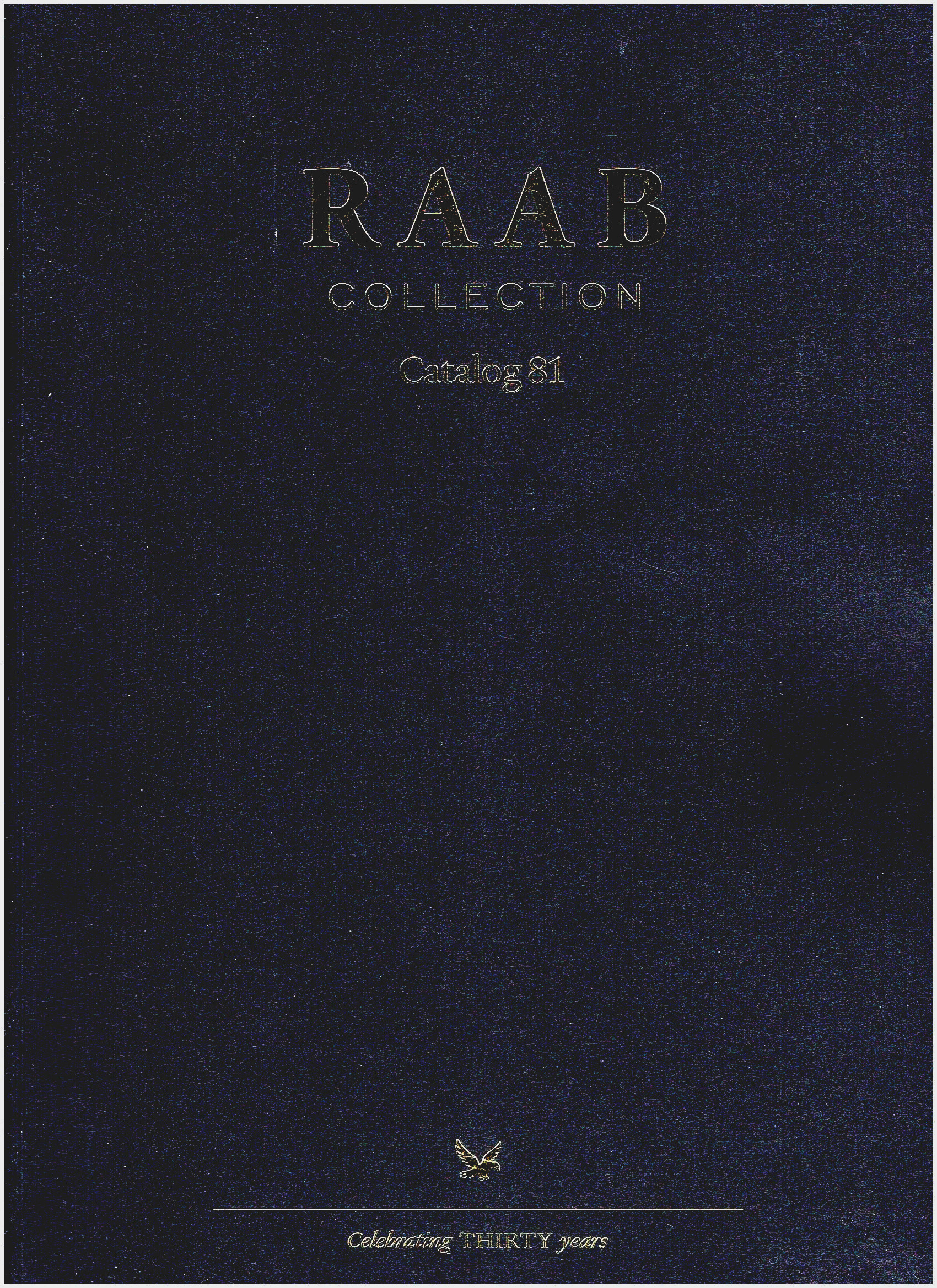 The Raab Collection has issued their Catalog 81. This represents a significant milestone for the major autograph dealer – their 30th anniversary in the field. Starting in 1989 as a literal kitchen table business, then known as Steven S. Raab Autographs, their growth was rapid and dramatic. Within a few years, Steven and Susan had quit their day jobs to devote full time to autograph sales. The level of material they handled reached the highest level, names such as Washington, Lincoln, Twain, Churchill, Einstein, and so many more filling their catalogues. Now joined by son and daughter-in-law Nathan and Karen Raab, the Raab Collection continues today as a family business. Here are a few selections from this 30th anniversary catalogue.

We begin with a letter from George Washington, dated November 14, 1778. It was sent to Major General Alexander McDougall at West Point. McDougall is not as well remembered as he should be. He became a wealthy man as a privateer during the French and Indian War. After that he settled down in New York, bought a lot of land, and could have lived happily ever after. However, he became deeply involved in the patriot cause. He led troops throughout the Revolution and was highly respected both by the troops who served under him and by Washington. In this letter, Washington informs McDougall that several British ships were caught in a storm. One landed on Cape Cod and the crew had been captured and imprisoned “(except 40 or 50 drowned)”. Three or four other ships were seen in “Extreme distress,” he continues, pointing out that “If the fleet had not made port before the Storm of the 11th and that of last night we may conclude that they cannot be in a very agreeable situation.” No, that would not be very agreeable, but their misfortune would be good fortune for the Americans. The letter is written in the hand of aide-de-camp Caleb Gibbs, but signed by Washington. Priced at $42,500.

Washington and McDougall couldn't have known it at the time, but all turned out well for the Americans in the Revolution. Fifty years after one of its first battles, the Battle of Bunker Hill in 1775, a celebration was about to be held on the site. It would be the laying of the cornerstone for the Bunker Hill Monument. Many thousands would attend, but most of the military leadership, including Washington and McDougall, were gone by then. However, one notable leader was still living and he traveled all the way from France to attend. That would be, of course, the Marquis de Lafayette. He had not set foot in America for 40 years when he returned. Still, he was given a hero's welcome as he toured the country, visiting aged Presidents Thomas Jefferson and John Adams, both of whom died the following year. On his way to the Bunker Hill celebration, on May 24, 1825, he wrote this letter to the Committee for the Bunker Hill Monument. He had recently met former Treasury Secretary and American diplomat Albert Gallatin in Pittsburgh and planned to head east, traveling the newly built Erie Canal along the way. He expected to arrive June 15 or 16, in time for the June 17 ceremony. He concludes that he will write again to report his progress, “but feel myself assured I shall not miss one of the highest gratifications I can ever enjoy.” He did arrive on time and placed the cornerstone for the monument. Not even Lafayette would still be around when the monument was finally completed in 1743. $17,500.

Here is a handwritten document by Henry David Thoreau, but it is not a treatise on the environment, civil disobedience, slavery, or anything like that. It is, rather, a land survey. After all, even Thoreau had to earn a living, and along with being a teacher, writer, and working in the family pencil factory, he was a land surveyor. Despite having no formal training in the field, he was known for being quite good at it. Offered is a rare land survey in Thoreau's hand. It is a “Plan of Davis Piece (so called) in the S. W. part of Concord Mass., belonging to Thomas Wheeler.” It is dated April 28, 1856. Writing of this surveyed land in his journal, Thoreau explained “...the naturalist even will stumble upon some new and unexpected flower or animal.” $40,000.

Next is a typed letter signed by Theodore Roosevelt. It is dated July 27, 1898, from Cuba. It comes during Roosevelt's “Rough Rider” days. The recipient was Emily McLean, President-General of the Daughters of the American Revolution in New York. The DAR had supplied the Rough Riders with some hammocks, for which Roosevelt expresses his “utmost gratitude.” He then goes on to write about their condition in Cuba, which obviously was not all that good. “We have had a pretty rough time of it here,” he writes. “Half of my men have been killed, wounded or prostrated by fever or dysentery and we have utterly lacked good food, shelter, clothing and medical supplies and assistance.” Other than that, everything was fine. Roosevelt expresses the wish that his men be sent home or to “Porto Rico” to recuperate. “...I wish they would not keep us here to catch the yellow fever, unless, of course, there is some real necessity for it.” I can't imagine a necessity for their catching yellow fever. $20,000

Here is another presidential letter, but this is from a past President rather than a future one. He is not one the greats, much more a contender for worst than best. Even members of his own party disavowed him and he would be the only American President to openly support the Confederacy against his country. As such, the opinion of John Tyler on March 12, 1850, concerning the Compromise of 1850, is interesting. Tyler supported the compromise, which was not universally supported in the South as well as the North. He first attacks northern opponents. Writing to his son Robert, the former President says, “The Democratic Party can only hope for success by discarding from among them the free soilers, abolitionists and all such cattle. Let...true lovers of the Union repudiate them as unworthy of their association. They do indeed deserve the deepest curses of the patriot for having put in jeopardy the noblest and fairest fabric of government the world ever saw.” However, he also criticizes the South's most notable spokesman of the era, John C. Calhoun, albeit less harshly. Speaking of Calhoun's speech, Tyler writes, “It is too ultra and his ultimata impracticable... I regard his speech as calculated to do injury to the Southern Cause, and in that view I regret its delivery...” He also criticizes President Zachary Taylor, who opposed the compromise. He says the President “...mistook all the demonstrations of popular feeling as evidences of his popularity, in all which he was in great error.” Taylor would die in office a few month later, leading to the passing of the Compromise of 1850, which only made the situation worse, perhaps making the Civil War inevitable. $6,000.