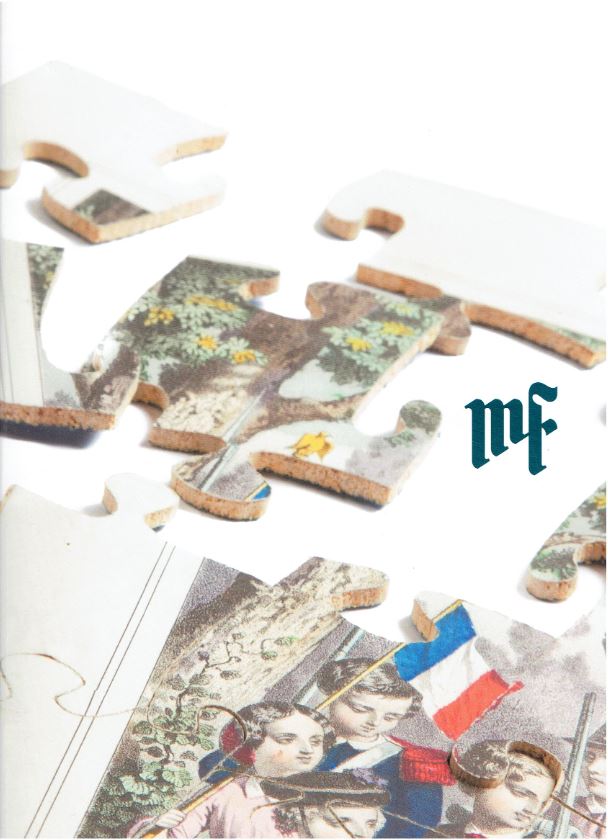 Mark Funke Bookseller has printed a new catalogue labeled only MF on the cover. We will assume that stands for Mark Funke, because what else could it stand for? On the spine it reads Catalogue 02. It offers 25 items on 146 oversized pages. No one will feel shortchanged by this catalogue. If that isn't the most thorough presentation ever I don't know what is. Most items have 3 or 4 full pages of illustrations to go with the description.

What is inside? Good question. Funke tells us it ranges from “the eccentric to the exquisite.” Price points go from $50-$20,000, meaning everyone is covered but the very poor and the inordinately rich. For a more specific description, we find it includes “a variety of topics, including death, Halley's comet, homosexuality, Mickey Mouse, and vegan cooking.” So, what is the common thread? Beats me. Perhaps Mickey Mouse is vegan and gay, and witnessed Halley's comet, but I don't think he is dead, though he is near a century in age. Here are a few of the selections you will find.

The first item in the catalogue, though surely it ought to be the last, is the one pertaining to death. This is not a subject we like to talk about, but this book contains 167 leaves about it. It is a collection of death certificates. They come from Vienna between the years 1740 and 1830. Funke calls it a “small subset of life in Vienna,” though that is giving quite a broad meaning to the term “life.” They recount these people's last moments on earth, or at least, the surface of the earth. “Or,” as Funke points out, “if you're feeling less morbid, the history of undertakers in one of the most beautiful cities on earth during a truly fascinating time.” Some are in manuscript, others filled in around beautiful type in Latin and German. Now mostly two or more centuries departed, there may be little else left of what were once people's lives, maybe even our ancestors. Item MF 026. Priced at $2,450.

This is a one-of-a-kind. It is the working copy for the revised second edition of Franz Neumann's Behemoth: The Structure and Practice of National Socialism. Neumann was a political scientist and a German Jewish socialist, but naturally, not the National Socialist type, that being the Nazi party. That placed him in the moderate left spectrum of German politics in the 1920s, pro-labor but seeking cooperation. After the Nazis came to power, Neumann was warned that he would be arrested. He got out early, moving first to London and then to America. Behemoth was his opus, an explanation of National Socialism for Americans unclear of what it was about. Neumann's conclusion was that it was not so much a clear political philosophy but a uniting of various groups with a shared hatred for the labor movement. Its modus operandi was to use terror, lawlessness, and arbitrary actions to keep the population in line. In 1942, after publication of the first edition of Behemoth, he began working for the OSS, the forerunner of the CIA. He was able to provide insights to the agency as to what their intelligence meant. He later transferred to the State Department where he provided advice on who to prosecute and how to go forward with war crimes prosecutions. Item MF 041 is Neumann's working copy of Behemoth in preparation of the 1944 second edition. It is a copy of the first edition with 80 interleaved blank pages, many with Neumann's notes, including “copious edits and diagrams.” Funke explains, “This is a book that helped the United States win World War II and is studied to this day.” $8,500.

Next is an extensive, though not complete run of Esperanto Poriaklasbatalo Internaciisto. It consists of 73 newsletters from the years 1975-2002. This was a publication of Austrian Communists, but this isn't what makes it interesting. Communist propaganda isn't, for the most part, all that fascinating. What is interesting is the language. They are written in Esperanto. There aren't all that many Esperanto speakers out there. The problem is that it has no native speakers. It's an invented language. The idea behind it made sense. People have trouble communicating with other people from different lands. Whatever our language, most people don't speak it. Esperanto was created to be everyone's second language, so we could communicate with others no matter what was their primary language. It was designed to be easy to learn, without all the idiosyncrasies of other languages that make them difficult to learn. It had no tenses, no male and female verbs, all those things that make languages confusing. It made perfect sense for Communists who sought to organize the world. Unfortunately, it didn't work as planned. Having no native speakers to push its use, Esperanto never achieved much acceptance. A few people can speak the language, but very few. Its appeal ended up not being much greater in the long term than did that of international communism. Item MF 044. $1,750.

This is a bilingual book about a biracial couple. The title is Rabbey in the Woods, by Shigeru Tomiyama. The text is in English, but there is supplemental text in Japanese. It is a children's book, and as expected, filled with illustrations. It is a story about a young bunny who goes out to meet many other animals. It offers a lesson in tolerance. Not only is there interspecie tolerance among the various animals, but also within Rabbey's family. As he explains, “I have parents. Father is Blackey. He is black. Mother is Whitey. She is white.” Such a family would not stir much controversy today, but this book was published in 1948. Evidently, fur color is not as big a deal for animals as skin color is for humans. Come to think of it, dogs and cats of different colors get along fine. What is it with humans? This copy was inscribed by the author to the teacher of his children. Item MF 037. $750.

This item was created by the Socialist Youth of Germany – Falcons in 1982. The title is Ronald Reagans Kriegsrevue, that is, Ronald Reagan's war review. It was not meant to be complimentary toward the U.S. President. Reagan visited Berlin on June 9, 1982, and this was prepared as a protest. There is a broadside accompanied by a 5 ½ minute audiotape. The tape cassette contains sounds of sirens and bombs, along with spoken words and a protest song. The flyer notes that excess revenue from sale of the tapes would be contributed to benefit workers in El Salvador. That was a nice thought, but my guess is that those El Salvadoran workers needed to keep their day jobs anyway. Item MF 046. $350.