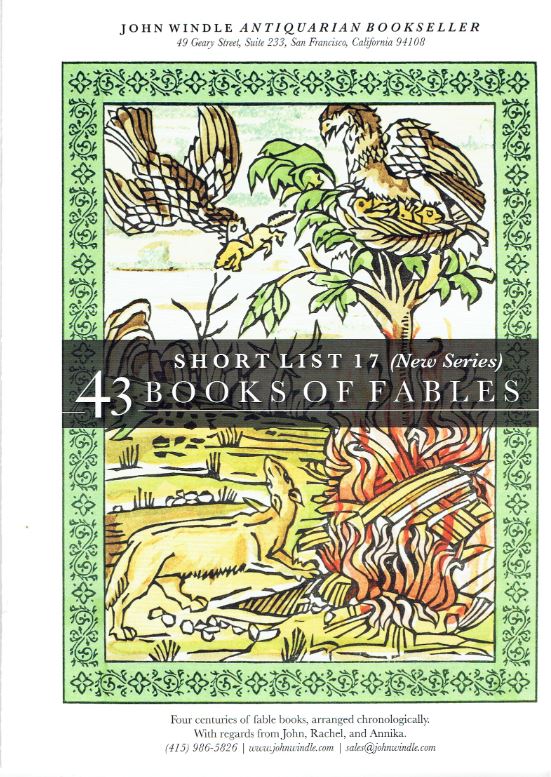 John Windle Antiquarian Bookseller has issued a catalogue of 43 Books of Fables. One usually thinks of books of fables as something for the children, though that only developed over time. Earlier ones were generally targeted to an older audience, who undoubtedly needed the lessons in morality they taught as much as, if not more than, their children. The heroes (and villains) of these tales are primarily animals, humanized ones, with the voices, strengths, and weaknesses of our species rather than their own. Two names dominate this collection of fables. The greatest number, by far, are attributed to Aesop, an ancient Greek writer. None of his actual writings exist, so how many, if any, of these tales really originated with him is questionable. They are more stories passed down by generations while where they originated is unknown. Some clearly are of more recent vintage, even if the name of Aesop is invoked. The second most common name is that of Jean de La Fontaine. La Fontaine was a 17th century French fabulist. His fables are correctly attributed to him. La Fontaine may not have reached quite the level of fame in America as he did in his homeland and around the continent, but he is a beloved figure in France. These are a few selections from the 43.

We begin with a 17th century edition of Aesop in English, and a very rare book. The title is The Fables of Esop, in English. With all his life and fortune... Whereunto are Added the Fables of Avian: and also the Fable of Alphonce, with the Fables of Poge the Florentine, very pleasant to be read. We imagine today the publisher would use more hyperbole in describing a new book than “very pleasant to be read.” This edition was printed by “F. B.” for Andrew Hebb in 1647. We aren't sure which edition this is, there having been at least two prior published by Hebb, the earliest of these from 1628. The 1628 edition was described by Quaritch in 1922 as “the only known copy.” This edition has a few more known copies, but still single digits. This is based on a Caxton translation so there are even earlier versions that are similar. A note by a previous owner in this copy reads, “I consider this to be a book of very great rarity. It is said to be Caxton's translation tho not a faithful represnt.” Item 4. Priced at $9,500.

With Aesop's fables getting old, later editions often became notable for their new illustrations. Here is one such edition. Item 30 is Aesop's Fables: A New Version, Chiefly from Original Sources. This edition was edited by Thomas James and published by John Murray in 1848. What makes this edition special is that it was the first book illustrated entirely by John Tenniel. Tenniel was introduced to Murray who asked him to provide all of the drawings for a revised edition of Aesop. Tenniel created those illustrations from drawings he previously had made at the London Zoo. However, he had to make revisions in his illustrations for the 1851 edition to make them anatomically correct, that is, consistent with cuts added by animal painter Joseph Wolf. One of his drawings was particularly liked by Lewis Carroll, which convinced Carroll to select Tenniel to illustrate Alice's Adventure's in Wonderland. It is his Alice illustrations for which Tenniel is most well-known. $750.

Next we have an early version of the fables of Jean de La Fontaine. The title is Fables choisies. Mises en vers par Monsieur de La Fontaine, et par luy reveues, corrigées & augmentées de nouveau. That translates to it being La Fontaine's fables in verse as revised, corrected, and enhanced by him. This is a 1688 edition published in the Low Countries. It was taken directly from the 1678 French edition whose publication was overseen by La Fontaine. In this case, parts 1, 2, and 4 were published in Antwerp by Henry van Dunewalt while part 3 came from Henry van Bulderen in The Hague a short time later the same year. This is notable as being the first illustrated La Fontaine published outside of France. The first illustrated French edition was published in 1668, but it would take another 20 years for such an edition to be published elsewhere. The illustrations were provided by Hendrik Cause, though these were taken from those of Chaveau in the 1678 edition. The frontispiece was engraved by Romeyn de Hooghe. This copy was inscribed by an unknown person to Frobenius de Furstenberg, but Windle notes there were two Furstenberg families so exactly who that is is unclear. Item 7. $3,950.

For an alternative to the greats of fable-writing, Aesop and La Fontaine, you can also go with a writer of the “second rank.” It is a less costly alternative. M. de La Motte, whose actual name was Antoine Houdar, was a prolific writer. He started as a playwright with a major flop, though he had some success later. Voltaire said of him “He proved that in the art of writing one can still be something in the second rank.” The Academie Francaise wrote of him, “He wrote operas and ballets. Poet and fabulist, he also made a bad translation of the Iliad.” He actually was elected to the Academie Francaise, though struggling to earn a reputation as a great writer. In Prose Poems of the French Enlightenment, Fabienne Moore writes of him, “Artless and monotonous versification makes his poems emblematic of 'the transformation of classical poetry into artificial poetry.'” La Motte might have agreed he was something of a modernist, as opposed to a classicist, but probably not with the comments about being artless, monotonous, or artificial. Item 12 is One hundred new court fables, written for the instruction of princes, and a true knowledge of the world. Inscribed To the King of France, the Duke Regent, the most illustrious Personages of that Court, and to the Queen of Prussia. With a Discourse on Fable. By the Sieur de La Motte. Made English from the Paris edition, by Mr. Samber, published in 1721. Obviously, M. de La Motte did not share the views of those who saw him as less than one of the greats. $175.