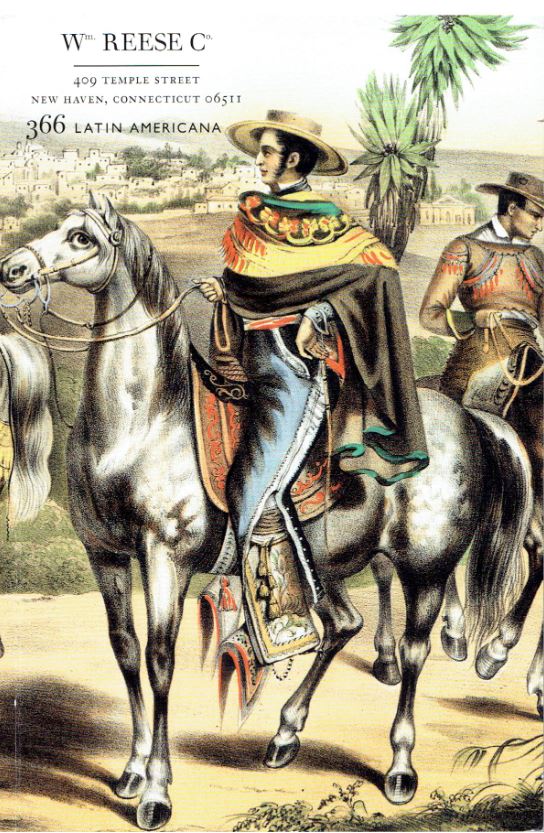 The William Reese Company's latest catalogue is devoted to Latin Americana. Reese is noted as a premier dealer in Americana, but that usually refers to areas settled primarily by the British. These books range from Mexico south, all the way to Patagonia. Some of them go back to the earliest days of the Spanish conquistadors who seized virtually all of South and Central America (except for the eastern portion, Brazil, reserved for the Portuguese). Later material comes from the 19th century, the days when natives of the region finally overthrew their Spanish conquerors and set about the difficult task of resolving their own differences. Here are a few of the items you will find in this collection of Latin Americana.

The conquerors of the New World were not known for their humanitarianism. Rather, they were noted for their brutality. It led to a few voices in protest, most notably Father Bartolome de las Casas. He found the treatment of the land's natives so cruel and unchristian that he reported it to the Spanish King. The result was the two ordinances printed in this book in 1543, Leyes y Ordenancas nueuame[n]te hechas por su Magestad, pa[ra] la gouernacio de las Indias y bueno trataniento y conseruacio de los indios (laws and ordinances, made by their Majesty, for the governance of the Indies and good treatment and conservation of the Indians). Promulgated by Charles V, these were the first printed laws pertaining to the New World. One of the ordinances was designed to insure better treatment of the natives; the other to prevent the Spaniards from wholesale taking and dividing up among themselves the Indians' land. It represented good intentions by the King, but unfortunately, we know what paves the road to Hell. The Spanish who had taken the land were not about to sacrifice their own self-interest for the sake of treating the natives humanely. They rebelled and the King was forced to greatly reduce the demands made upon the conquerors in these ordinances. Item 24. Priced at $125,000.

Once the Spanish got past this temporary blip of humanity, it was a return to business as usual. It went on this way for several centuries. However, in 1749, brothers Juan and Antonio Ulloa reported to King Ferdinand VI on conditions in South America. Item 121 is a copy of that report, Noticias Secretas de America. The report attacks not only the cruelty of government and private individuals, but the conduct of priests and missionaries as well. According to Sabin, “These secret memoirs, in which everything concerning the manners, government, and state of defence of that portion of America which once belonged to Spain, is accurately described, are written with that truth, impartiality and good judgment which distinguished the informants. The benevolent and virtuous Las Casas has been accused of exaggeration and falsehood in his account of the cruelties of the Spaniards to the Indians, but these revelations, which have lain in the archives of Madrid for over half a century, exhibit so monstrous a system that it is difficult to realize that the revelations are true.” This report remained hidden in Spanish archives until 1826 when Peru achieved independence. It was found in the Spanish archives, and taken to London where it was printed. $9,500.

Britain is not often associated with attempts to colonize South America, but from time to time they had their designs. Several times they considered an attempt to seize Buenos Aires, but these did not get off the drawing board until the early 19th century. Spanish authority was already weakening in their colonies when the British attacked Montevideo and Buenos Aires in 1806. They temporarily seized Buenos Aires that year, but were pushed out by local militias. They tried to recapture the city in 1807, but this invasion proved to be a disaster. Item 6 is an account of this battle, A Narrative of the Expedition to, and the Storming of Buenos Ayres, by the British Army, Commanded by Lieutenant-General Whitelocke. By an Officer, Attached to the Expedition. The identity of that officer is unknown. Published in 1807, it recounts the defeat of Whitelocke's forces by a citizen army of peasants and Creoles commanded by Santiago de Liniers. Whitelocke was forced to withdraw British forces from the area. On his return home, he was court-martialed and removed from service. However, his nemesis, Liniers, fared worse. Three years later, he led a small counter-revolutionary force in the revolution of 1810, was captured and executed. $2,750.

A decade later, Spanish rule of South and Central America quickly fell apart, the failed revolutions of 1810 replaced with success. The most notable leader of this revolutionary period was Simon Bolivar. He became known as the “George Washington of South America.” Unfortunately, Bolivar had to deal with far more dissenting factions then did the revered Washington. After the success of the revolution, he became the founder and President of Gran Colombia, comprising today's Venezuela, Colombia, Panama, Ecuador and part of Peru. Facing attacks from his rivals who accused him of attempting to become a dictator, Bolivar strategically tendered his resignation. Item 16 is an 1827 broadside offering his resignation to Congress, A.S.E. El President de la Honorable Camara del Senado. Writes Bolivar (translated), “In vain do I invoke the example of Washington to defend myself...” Congress refused his resignation, as Bolivar wished, but continued infighting led him to declare himself dictator for life the next year, though he had no intention of remaining as such. He was attempting to maintain power so he could hold his country together. Ultimately, it did not work out. Bolivar died in 1830 and Gran Columbia broke apart in 1831. $17,500.

In the 1820s, the British were dealing with their own revolutionary tide. In this case, it was unhappy slaves in their colonies. There was a rebellion in Demerara, now British Guyana. Rev. John Smith, a Methodist missionary sent by the London Missionary Society to minister to the slaves, was too sympathetic to their plight than pleased authorities. He was ordered to join the local militia but refused. Smith was put on trial for promoting “discontent and dissatisfaction in the minds of negro slaves.” On November 24, 1823, he was sentenced “to be hanged by the neck until dead.” Not surprisingly, this led to outrage among abolitionists, missionaries, and others. Item 110 is The London Missionary Society's report of the proceedings against the late Rev. J. Smith, of Demerara, minister of the gospel, who was tried under martial law, and condemned to death, on a charge of aiding and assisting in a rebellion of the Negro slaves, published in 1823. It claims the trial was unfair and Parliament did not receive evidence favorable to the defendant. The Society and others sought to have Parliament rescind his conviction. Unfortunately, before Parliament could act, Smith died in prison of an apparent heart attack. Nonetheless, his conviction was overturned, and this case helped fuel the abolitionist movement which succeeded in ending slavery in the British colonies within a decade. $1,000.