Travel, Exploration, Voyages, and the Arctic from Patrick McGahern Books 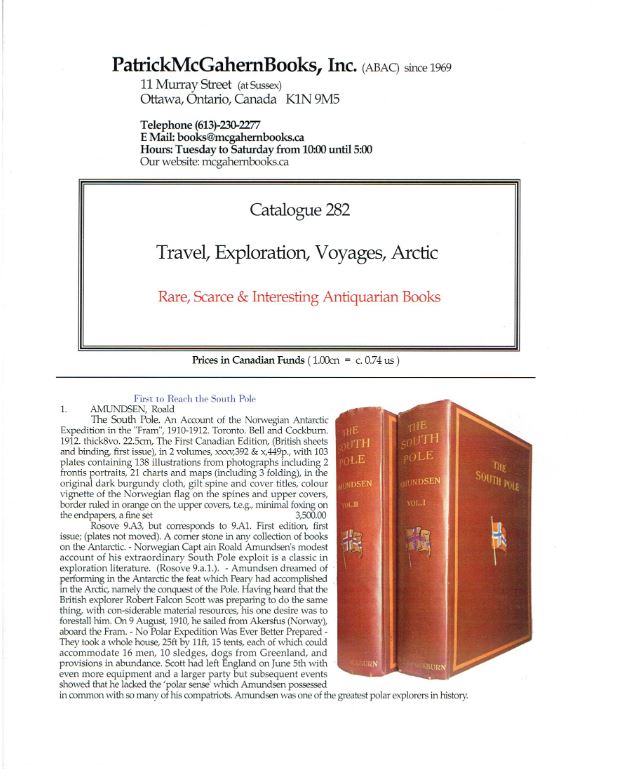 Patrick McGahern Books has issued a catalogue of Travel, Exploration, Voyages, Arctic. This is not the typical McGahern catalogue, or perhaps we should say, it is only half so. McGahern is a Canadian bookseller and most of the books they offer pertain to the far northern climates, Canada and the many explorations that took place in the Arctic territories over the centuries. The exceptions are usually of explorations at the other end of the globe, the far south, Antarctica. This catalogue is split between travels and explorations in the polar regions and those to places located closer to the equator. There are numerous books dealing with Arabia and the Holy Land, Asia and Europe. The entire world is fair game for this catalogue. These are a few selections.

We begin with a map that is far removed from the poles. It is A New Topographical, Physical, and Biblical Map of Palestine, published in 1901. This is a detailed map of the Holy Land on a scale of one inch per four miles. It ranges from Beirut in the north to Arabah (around the Dead Sea) in the south, and east as far as Damascus. The map, which comes in covers (detached) with an index, says it was compiled from the latest surveys, and shows Biblical sites and current place names. Roads, railways, and points of interest are also displayed. Inset maps include one of Jerusalem. The map was produced by John Bartholomew and Son, or specifically, J. G. Bartholomew. John George was the the third of what would be five generations of Bartholomew family cartographers to run the business. Founded by his grandfather in 1826, it remained in the family until 1989 when merged by his grandson into Harper Collins. John George's father, John Jr., is noted for creating the system of brown and green coloring to denote differences in altitude on maps, still used today. John George is the one who gave the continent of Antarctica its name. It had once been known as Terra Australis, or to some Australia, until the continent once known as New Holland was given that name. The south polar continent went nameless, called such things as “Antarctic land,” until J. G. began calling it “Antarctica.” Item 3. Priced at CA $300 (Canadian dollars, or approximately US $226).

Next we have an account that ties together America, Canada and Britain, though not in the most cordial of relations. The year was 1777 and the American colonists had declared themselves independent of England. The British did not accept that declaration and determined to put those uppity colonists in their place. They had a plan – divide and conquer. They would split the Americans, divide New England from the middle Atlantic and southern states. Since Britannia ruled the seas, if they could put a land wall between the two sides, they would not be able to communicate or assist each other. The Americans would become easy pickings. To accomplish this goal, they sent troops down from Canada. They would travel down through northern New York to the Hudson River, and from there to New York City. The colonies would be cut in half. The British assigned Gen. John Burgoyne the task, and with 5,000 troops he headed south. He made it as far south as Saratoga when he was confronted by American troops, some 15,000-20,000 of them. As anyone who has visited today's Saratoga and its famous horse racing track knows, those are not fair odds. The Americans, led by Gen. Horatio Gates and another patriotic American general, Benedict Arnold (times change), routed the British. The easy victory the British anticipated in the Revolution had eluded them. Meanwhile, the Americans gained self-confidence, and potential supporters, such as France, came to believe the Americans had proven themselves worthy of their support, which would prove to be crucial. Of course, when he returned home, Burgoyne was immediately blamed for the defeat. Under attack, he wrote this account to defend himself, A State of the Expedition from Canada, as laid before the House of Commons. This is a second edition, published in 1780. Burgoyne points out that he had told authorities he needed 12,000 troops to succeed, but received only half of what was needed. Burgoyne was held responsible for the defeat anyway and received no further commands. However, he did not end up despised by his countrymen as did one of the victors, Gen. Arnold. Item 10. $3,800 (US $2,874).

In 1911, there was a race to be the first to reach the South Pole. It pitted a noted British explorer against an expert Norwegian counterpart. As in all races, there is a winner and a loser. In this case, the loser lost far more than a race. He lost his life. McGahern has accounts from both sides. The winner was the Norwegian, Roald Amundsen. Item 1 is the first Canadian edition, first issue of Amundsen's The South Pole. An Account of the Norwegian Antarctic Expedition in the "Fram," 1910-1912, published in 1912. Amundsen had heard of Englishman Robert Falcon Scott's plans to reach the South Pole and prepared for his assault as quickly as possible. Scott was more heavily supplied, but Amundsen had better equipment and was more knowledgeable. He knew how to navigate the ice, planned his supply stops better, and picked a shorter route. With a head start, he also enjoyed better weather. On December 14, 1911, Amundsen's team became the first to reach the South Pole. CA $3,500 (US $2,651).

For Scott, it was an entirely different story. They too made a run on the pole, arriving on January 17, 1912, only to be greeted by a Norwegian flag, a tent, and a note by Amundsen. Scott was devastated, and now faced the 800-mile trek back. The men got about halfway before conditions rapidly deteriorated. They were not able to hook up with needed supplies and the weather turned far worse. They faced blizzard-like conditions and despite it being Antarctic “summer,” the temperature dipped to 40 below. Two of the five who made it to the pole died along the way before Scott and two others holed up in a tent, unable to proceed any further through the extreme weather. They died there. Item 36 is Scott's Last Expedition, a second edition published in 1913. It contains Scott's journals and reports by others on the mission. He wasn't first, and it ended badly, but Scott and his men emerged with a reputation for incredible bravery under the most unimaginable of conditions. CA $1,100 (US $833)

From the 19th century comes this travel account: Views in India, China, and on the shores of the Red Sea; Drawn by Prout, Stanfield, Cattermole, Purser, Cox, Austen, &c. from original sketches by Commander Robert Elliott. With descriptions by Emma Roberts, published in 1835. Emma Roberts was an English poet and travel writer well-respected in her time. She traveled to India with her sister and brother-in-law who had taken work there. She returned a few years later and produced this book. The beautiful illustrations of India and China make this a noteworthy volume. Roberts returned to India in 1840, this time making an overland journey about which she wrote, but took ill and suddenly died later that year. Item 31. CA $1,500 (US $1,136).