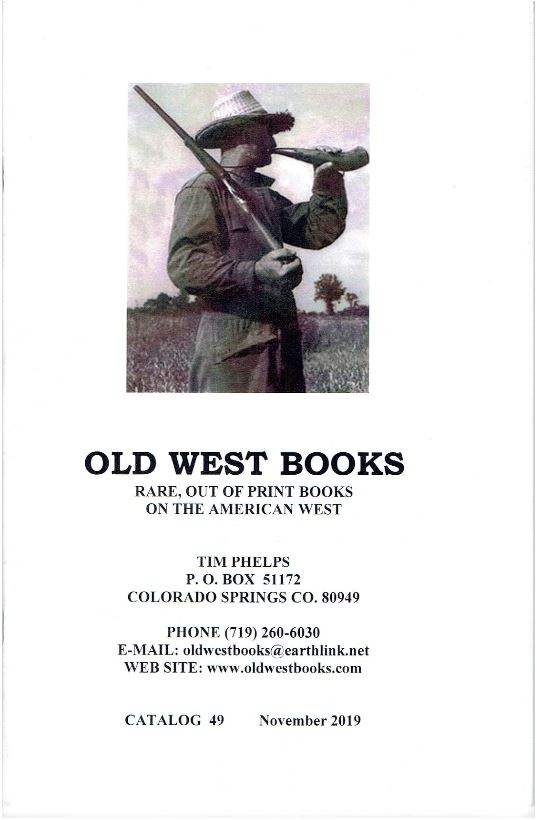 Old West Books has published a new catalogue of Rare, Out of Print Books on the American West, specifically, Catalog 49. There is no need to describe what sort of material you can expect from a bookseller named Old West Books. It relates to the American West from the 19th century to the early 20th. It covers the famous, the infamous, and lots of people in between. Here are a few of the items you will find.

We will begin with a guidebook to the Old West back in the days of old. There were several guides that came out in the late 1840s to help people along the major route west, the Oregon Trail. A decade later, there were all sorts of routes west, not just to Oregon, but California, the gold fields of Colorado, and all points in between. Here is one from 1859, The Prairie Traveler. A Hand-Book for Overland Expeditions, with Maps, Illustrations, and Itineraries of the Principal Routes Between the Mississippi and the Pacific. The author was Randolph Marcy, and he knew the area well, having spent half his life on the plains and the Rocky Mountains. Rather than one trail to Oregon, Marcy provides 28 different routes west, including to the Pike's Peak gold fields and the Santa Fe Trail. He also describes how to organize a wagon train, what equipment to take along, and how to avoid dangers and attacks. Item 76. Priced at $1,750.

You probably think that Jesse James was Missouri's greatest desperado. Not according to George Clinton Arthur, he wasn't. He published a book in 1938 entitled Bushwhacker: A True History of Bill Wilson, Missouri's Most Famous Desperado. A Story in Blood. Bill may have to settle for runner-up, but he he was at least a close second. He got his start similarly to the more famous Missouri outlaw. During the Civil War, Missouri tried to stay neutral, but the reality was the state was bitterly divided, often neighbor against neighbor, brother against brother, some loyal to the Union, others supporting the Confederacy. Sometimes, loyalties depended more on personal events than political principles. Bill was accused of stealing some Union horses. Some renegade soldiers got their revenge, burning down his house. Bill became a one-man wrecking crew. He would ambush and kill Union soldiers when he got the chance. He also became loosely associated with Quantrill's Raiders, the same group that gave James his start. His tale became a fictionalized movie, he being the prime source of the character known as “Josey Wales,” played by Clint Eastwood. Arthur's book was based on testimony about Wilson's career from descendants of those who knew him. While Bill's ending is not known for certain, it is believed he died a few years after the war in Texas when a pair of his once fellow Missouri partisans saw him get some cash from a transaction, overcame and killed him. Considering his life of revenge against Union soldiers for burning his house, it is ironic that his worst fate came at the hands of Confederates. Item 4. $450.

Lincoln County, New Mexico, is noted for killings, specifically because of its most notable son, Billy the Kid, but the Kid had nothing to do with the county's worst murders. That “honor” goes to a long-forgotten man by the name of Martin Nelson. He was something of an early version of the mass killers we see today. It all happened in Bonito City, not much of a city, but a small cluster of homes and businesses in Bonito Canyon, about 12 miles from today's Ruidoso. It existed because of the search for gold in the area. Nelson was one of but two guests at the Mayberry Hotel one night in 1885. It was run by the Mayberry family, husband, wife, and three children. For reasons a mystery to this day, Nelson suddenly went on a shooting rampage. Speculations are theft, anger, a rejection by 14-year-old daughter Nellie. Whatever the reason, in the middle of the night, Nelson knocked on the door of the boys' bedroom, and when 17-year-old Johnny opened the door, Nelson shot him and bashed in his head with his rifle. As 7-year-old Eddie screamed from his bed, Nelson shot him too. Dr. Flynn from Ohio, the only other guest, opened his door to see what was going on and was promptly shot. The same happened to W. F. “John” Mayberry when he climbed the stairs to aid his children, as it did to his wife. Mrs. Mayberry made it to the street where she was shot again. Daughter Nellie was also shot in the hotel but survived, the lone survivor. Two others, a saloon operator coming to help the Mayberrys, and the owner of a store who looked to see what was happening, were killed. In the morning, three men had gathered in the street to discuss the horror when they saw Nelson approaching. One promptly shot and killed him before Nelson could shoot. The hotel remained vacant for 15 years, residents fearing it was haunted. In 1930, the remaining buildings were dismantled and the town flooded for a reservoir in Bonito Canyon. It now sits under 75 feet of water. The story was told in this pamphlet from 1938 by A. L. Burke, The Mayberry Murder Mystery of Bonito City. It should be noted that there are later accounts that differ in some of the details. Item 21. $425.

Here is a book about gunfighters who shared one thing in common (other than being gunfighters). They were all named Smith. The book's title is Western Hard-Cases, or Gunfighters Named Smith. Evidently, there were quite a few of them, but then again, Smith is a common name. To be honest, none of them immediately come to mind, so this book should be able to teach us something new. The author of this 1960 book was Ed Bartholomew. Item 8. $55.

This is one of the odder western books. Actually, most of it is about events in New York City. The lengthy title in part reads, Life of Col. James Fisk, Jr. The Prince of Erie. Of Miss Helen Josephine Mansfield, The Erie Princess. Of Edward L. Stokes, the Assassin, and of Hon. Wm. M. Tweed, of New York, the Notorious Leader of the Infamous Tammany Ring... Together with a Sketch of the Grand Duke Alexis of Russia. James Fisk was a stockbroker who became an investor, partner with Jay Gould in the Erie Railroad, and not above using bribery and such tactics to advance his career. That is why there was a connection to Boss Tweed and the Tammany Ring. Josie Mansfield was a woman with whom Fisk had an affair, but she later left him for his business partner, Edward Stokes. Mansfield and Stokes attempted to extort money from Fisk, but he refused to cooperate. A nearly bankrupt and frustrated Stokes confronted Fisk at the Grand Central Hotel, shot and killed him. Grand Duke Alexis was the fourth son of Czar Alexander II. The question, then, is what does any of this have to do with the Old West? The answer is the latter part of the book's lengthy title, Together with a Sketch of the Grand Duke Alexis of Russia. While this book does not connect Fisk to the visiting son of Czar Alexander II, another book reports that Fisk met with the Russian nobleman while he was on a goodwill tour of America in 1871. That meeting was in New York, but Alexis thereafter headed west on a famous hunting trip. He was accompanied at various times on that trip by Buffalo Bill, Gen. Philip Sheridan, Gen. George Armstrong Custer, and several Sioux chiefs. Some information about that western trip is found in this book. For example, it notes, “General Custar [sic] appeared in his well-known frontier buckskin hunting costume, and if, instead of the comical sealskin hat he wore, he had only feathers fastened to his flowing hair, he would have passed at a distance for a great Indian Chief. Buffalo Bill's dress was something similar to Custar's.” Item 55. $4,750.