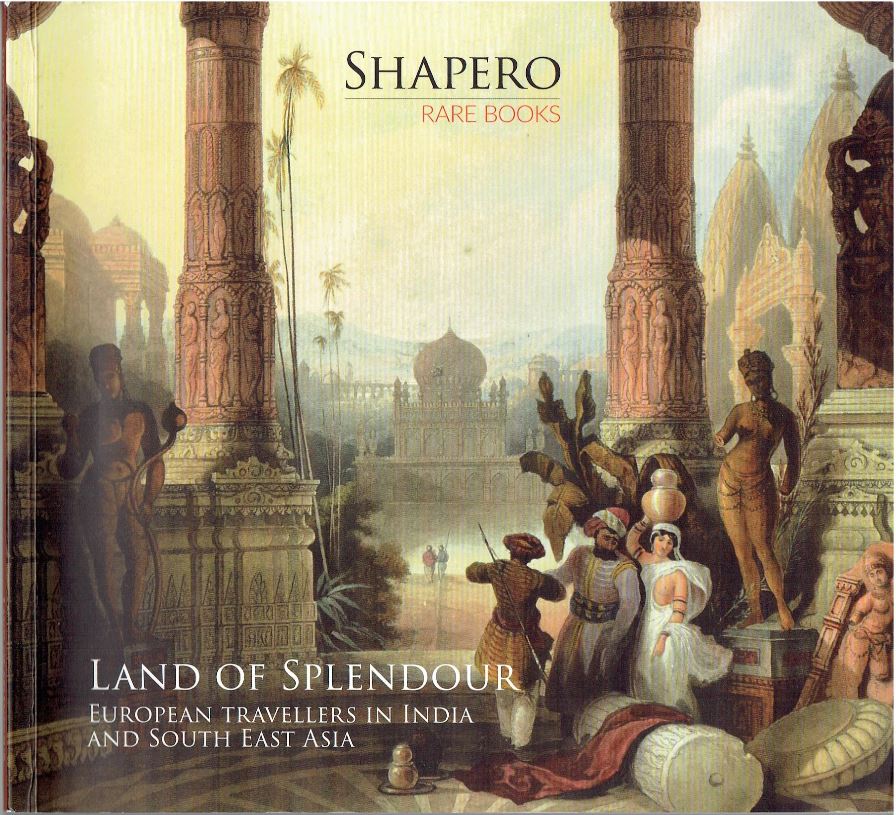 Shapero Rare Books has issued a catalogue entitled Land of Splendour. European Travellers in India and South East Asia. As a British bookseller, Shapero would have access to much historic material relating to India and surrounding areas. India was a British colony from the mid-19th to mid-20th century, and was largely controlled by the British East India Company for a century prior. The result is that much of the written work pertaining to the land is in English. The British also became involved in neighboring areas, though their ability to control those lands was problematic. They, like the Russians later and the Americans today, struggled to gain the upper hand in Afghanistan.

Shapero has divided the catalogue in three sections. The largest contains printed books, but there are two other specialty fields. One is of aquatints by Thomas and William Daniell. The other is photographs by Dr. John Murray. Here are a few selections from this latest catalogue pertaining to India and surrounding territories.

The aquatints offered were created by Thomas Daniell and his nephew, William Daniell. The Daniells traveled through India between 1786 and 1793. During that time, they made numerous sketches, which they turned into paintings, drawings, and prints on their return to England. They created 144 aquatints, known collectively as the Oriental Scenery. These are noted as being “the single largest and most impressive project by English artists to depict Indian architecture and landscape.” Shapero is offering seven of these aquatints in this catalogue. For example, item 7 is an aquatint by the Daniells from 1800 captioned S. E. View of the Fakeers Rock in the River Ganges, near Sultaungunge. Fakeers Rock is a pile of granite boulders in the Ganges River, a beautiful site which is also a holy place on which a structure has been built for religious visitors. Priced at €2,200 (British pounds, or approximately $2,833 in U.S. dollars).

Dr. John Murray was a medical doctor, but in the early days of photography, that soon became his passion. While serving in the Medical Service of the Army of the East India Company in 1849 (they had their own army in the days before India officially became a colony), he learned of the new process. He began taking photographs all over the country. He created large prints, which was difficult at the time as there was no practical method of enlarging images from negatives. He had to use heavy, large cameras capable of holding negatives up to 16” x 20” in size. The major focus of his photographs was Indian architecture, but there are also some other scenic views to be found. Shapero offers 21 of Dr. Murray's photographs, mostly from the period 1858-1862. Item 27 is a photograph Murray took in that 1858-1862 period of the Taj Mahal. Actually, he must have had some help in taking this photo as Dr. Murray can be seen seated on the riverbank in the foreground. €1,200 (US $1,543).

Item 36 is Cochin-China: Containing Many Admirable Rarities and Singularities of that Countrey, Extracted Out of an Italian Relation, Lately Presented to the Pope, by Christophoro Barri (actually, his name was Borri). Back in Borri's time, late 16th, early 17th century, southern Vietnam was known in the West as Cochin-China and, evidently, “country” was spelled a little differently. Borri was a Milanese astronomer who spent the years 1618-1621 in Cochin-China. This was the first western book on Vietnam, originally published in Italian in 1631. This is the first English edition of that first western book on Vietnam, published in 1633. Shapero notes, it is “remarkably full on products, trade, agriculture, fauna, and customs.” They also point out that the book is scarce. £17,500 (US $22,326).

Next, we will return to Cochin-China, but it is a quarter of a millennium later. Item 72 is Voyage d'exploration en Indo-Chine effectué pendant les années 1866, 1867 et 1868 par une Commission Française, by Francis Garnier, published in 1873. Shapero tells us this was once called “the happiest and most complete [expedition] of the nineteenth century,” perhaps because they brought along 700 liters of wine and 300 liters of brandy. Francis Garnier was second in command, though he later took over after the illness and death of the commander. Garnier had advocated an expedition from Cochin-China, specifically, Saigon, through uncharted territory to reach China. He sought a way to get around the British presence so the French could trade with China. They traveled up the Mekong River, hoping that would take them to China. It proved not to be navigable far enough, but they continued, passing through Laos and Cambodia, and even visiting Angkor Wat along the way. They eventually returned by way of Shanghai. This account includes 48 plates featuring the detailed views created from sketches by Louis Delaporte. £32,500 (US $41,490).

Here is a real Indian Captivity. “Indian Captivity” is the name given to those early American tales, usually exaggerated if not totally false, where white settlers are captured on the frontier by Native Americans and made to suffer all sorts of grievous indignities. However, this book is literally an Indian captivity, an Englishman captured by native inhabitants of India. Item 45 is A Narrative of the Sufferings of James Bristow, Belonging to the Bengal Artilley [sic] During Ten Years Captivity With Hyder Ally and Tippo Saheb. It was written by Bristow and published in 1793. According to Bristow, it was a most unpleasant ten years. He and his comrades were moved around to various places of imprisonment, marching through extreme heat, often bound, undernourished, some injured and dying. As an ordinary soldier, Bristow felt he suffered worse than officers who were kept imprisoned in one location. As such, he was able to add new information about captivity that accounts of officers did not contain. £900 (US $1,138).