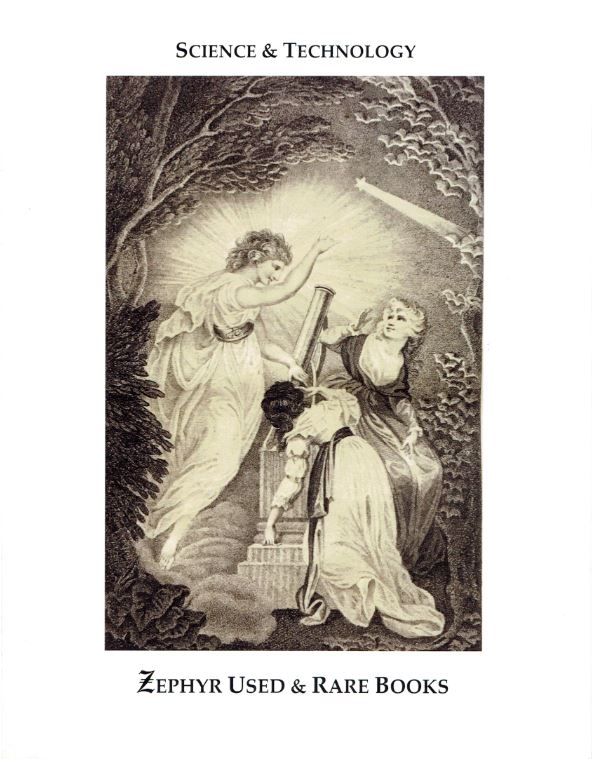 Zephyr Used and Rare Books has issued a catalogue entitled Science & Technology. Catalogue From One Collector. While the collector is not identified, Zephyr notes he is “a former U.S. Navy Submarine Captain.” The bookseller continues, “He avidly pursued applied mathematics, navigational treatises, works on mathematical instruments, globes, scientific instruments and technology.” This is not light reading. There are no books of science for dummies. The submarine captain was obviously well-versed in mathematical and navigational principles, as one with his responsibility would need to be. The Captain was obviously a sharp and knowledgeable individual. Here are a few of these books.

We begin with a book concerning a topic naturally of interest to someone with a naval career. It concerns the cause of ocean tides. The title is A New Explanation of the Ebbing and Flowing of the Sea, upon the Principles of Gravitation. The obscure American author was Samuel Bennett, the book published in 1816. He presents various experiments, mathematical formulas and such to support the details of his theory. Without attempting to understand those details of his argument, suffice it to say that basically he is a Newtonian, a defender of Isaac Newton's theory of the tides being caused by gravitational forces of the moon and sun. Item 2. Priced at $325.

If you would like to learn more about Isaac Newton's philosophy, here is a book by a man who knew him well. Henry Pemberton was a trained physician, but practiced little. Rather, he became focused on natural philosophy, in particular, that area today known as physics. An article he wrote came to the attention of Isaac Newton, who contacted Pemberton. Though Pemberton was over 50 years the junior of the octogenarian scientist, the two became friendly. The result was that Newton had Pemberton edit the third and final edition of Newton's famed Principia published during his lifetime. It was published in 1626, a year before Newton died. In 1728, Pemberton published his A View of Sir Isaac Newton's Philosophy. It also includes Pemberton's personal recollections of Newton. It is dedicated to the long serving Whig Prime Minister Robert Walpole. Both Pemberton and Newton politically were Whigs. Item 41. $750.

This is a book that was of enormous importance to American commerce in the 19th century. Not only was foreign trade dependent on the sea, but much commerce within the still mostly Atlantic coast nation in the early part of the century was carried on between ports. The lengthy title is The American Coast Pilot: Containing the Courses and Distances Between the Principal Harbours, Capes and Headlands, from Passamaquoddy, Through the Gulph of Florida: with Directions for Sailing into the Same, Describing the Soundings, Bearings of the Light-Houses and Beaches from the Rocks, Shoals, Ledges, &c. Together with Courses and Distances from Cape Cod and Cape Ann to George's Bank... This is the eighth edition, with many more to come. It was prepared by Edmund Blunt and published in 1815. The much shorter first edition was published by Lawrence Furlong in 1796. Blunt improved it, and both names appeared until this eighth edition, which bears only the name of Blunt. The problem back then was that many harbors along the coast were dangerous and difficult to navigate, and in the days before advanced technology, there was no other way to sail the east coast with a reasonable degree of safety. Mileage listings enabled captains to know where they were located and charts told them how to avoid hidden obstacles. Some of this may have even been useful for a submarine captain, though probably not the location of lighthouses. This copy contains additional manuscript instructions with clippings providing updated information, such as the location of a lighthouse built in 1821. This book came from the reference library of Capt. Thomas Hall II, who was lost at sea in 1829 between Charleston and Boston. Perhaps he should have taken it with him? Item 36. $450.

This book isn't really about science. It is a look at an anti-science. The title is Perpetuum Mobile: or, Search for Self-Motive Power, During the 17th, 18th, and 19th Centuries. The publication date was 1861, the author Henry Dircks. Dircks had a scientific mind himself. He was an engineer, inventor, and writer. Generally, he wrote about mechanical issues or the biography of inventors. He also was the inventor of “Pepper's Ghost,” a trick that passed an image through a plate of glass while another reflected off its face. With the glass being invisible to viewers, it created a ghost-like image, perhaps something akin to a hologram. Dirck's purpose in creating this illusion was to show people that those who used various means of creating ghostly appearances during a seance were simply using trickery. In this book, he takes claimed inventors of perpetual motion machines to task. He recognized the reality that you can't create energy out of thin air, that the claims of creating a perpetual motion machine were inevitably false. Item 45. $175.

Here is a book for those interested in horology. For those unsure of the term, it refers to the study of time and the making of clocks and watches. The title of this book, published in Paris in 1849, is Histoire de l'Horlogerie depuis son origine jusqu'a nos jours precedee de recherches sur la mesure du temps dans l'antiquite et suivie de la biographie des horlogers les plus celebres de l'Europe... The author of this first and only edition was Pierre Dubois, a watchmaker and expert on the subject. Dubois describes various clocks and timepieces from antiquity through the mid-19th century and provides biographies of Europe's famous watchmakers. He discusses sundials, the development of the pendulum, massive public clocks such as those in Venice and Strasbourg, and inventions by people such as Leonardo da Vinci and Ptolemy. Item 13. $350.