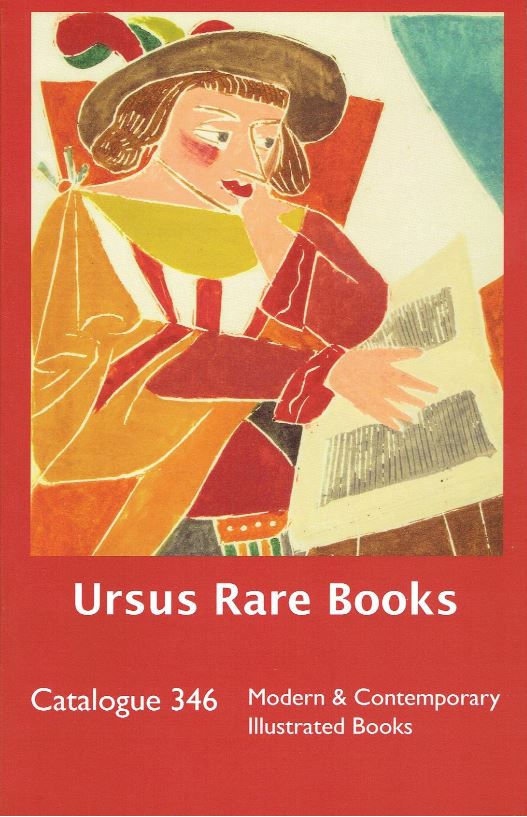 Ursus Rare Books has issued a catalogue of Modern & Contemporary Illustrated Books. Perhaps that needs a little more specificity. These are not regular books that happen to be illustrated. It is the illustrations that are their feature. In reality, these are more art books, works of art printed on the pages of a book. Some also have a significant amount of text, others not very much. Some are older classic works, but these editions are unique based on the accompanying modern artwork.

The description “modern & contemporary” art should be something of a caution. This won't be for everyone. You won't confuse these illustrations for Rembrandt or Michelangelo. Classic it is not. Some illustrations can be quite abstract, though others provide a greater degree of clarity. You may say “What the...?” when it comes to some drawings. Then again, you will almost certainly find some of it riveting, the sort that will make you want to see what else this artist created. Beauty is in the eye of the beholder. You will find yourself beholden to some, not others.

This is as hard a group of books to describe as I have ever faced. Realistic art is somewhat describable. Abstract art virtually is not. It must be seen to be appreciated or depreciated (not quite the right word). Here are brief descriptions of a few samples.

James Lee Byars has been described as a “minimalist” by some and I can see why. Item 12 is Gold Dust is My Ex Libris, [The White Cube], published in 1983. Fortunately, the cube isn't quite white or it wouldn't show up at all on the page. You couldn't tell if it were a white cube, circle or something else. The drawing of the cube is placed in the center of the book, with blank pages (or perfectly white cubes) on the pages before and after. The extra pages add depth to the concept. I will admit this one doesn't particularly grab me, but it comes from an edition of 500 copies so lots of people obviously had a different impression. Priced at $3,500.

Next we have Die Nibelungen... (a medieval German clan) illustrated by Carl Otto Czeschka. This is a children's book, published in 1909. Czeschka was of the Vienna workshop school of that day. The illustration from this book provided by Ursus is a two-page spread, packed together charging horses and knights, lances and flags raised, arrows flying. The illustration of jammed together knights, horses, and weapons acutely displays the cacophony of war. Clearly, many people aren't coming home from this. It's enough to make you wonder, all these centuries later, why are we still doing this? Czeschka couldn't have known it in 1909, but the world was about to enter its greatest such conflagration ever a few years hence. Item 15b. $3,500.

Here is another that jumps out at me. I find myself just staring at it. It is one Ursus selected to display from Die Traumenden Knaben by Oaskar (Oskar) Kokoschka, published in 1908. Maybe I just like artists whose names end in “schka.” This picture has a black background, with color scenes in the foreground. They range from very deep blue water to bright red and yellow of a woman's dress, and orange of fish in the water. If the cube above looks like something I can kind of imagine myself drawing (with the help of a ruler), there is no way I'm touching this. It is one of 10 lithographs in this first and only edition of a fable that translates to “the dreaming youths.” The illustrations fit well with the dreamy theme. Item 39. $35,000.

Olafur Eliasson is a contemporary Danish-Icelandic artist noted for large sculptures and artworks and melding art and science. He creates the unexpected, which describes this book. It contains 908 pages, but not a lot of writing. The title is Your House, but actually, it's Eliasson's house. Published in 2006 as part of the Museum of Modern Art's Contemporary Editions series, Ursus describes it as “one of the more exciting new achievements in book making in the 21st century.” What Eliasson has done is use computer assisted laser die-cuts to create a vertical cross section of his house. It is printed on an 85-1 scale, with each leaf representing 2.2 centimeters (7/8ths inch) farther in. Eliasson says, “It is like walking through a house, following the layout of the rooms with your body and mind...” I know what this is – an MRI. It's an MRI of a house. This is one of 225 copies and is signed by Eliasson. Item 23. $18,500.

Next we have the Poésies de Stéphane Mallarmé (Poems of Stéphane Mallarmé). Mallarmé was a 19th century French poet noted as one of the founders of symbolism. It transformed literature and poetry from being literally descriptive to more of an art, the sounds of words giving them multiple meanings, and descriptions meant more to elicit responses than providing one-of-a-kind photographic meanings. This is not a first edition of Mallarmé's poetry by any means. It was first published in 1887, while this edition was released in 1932. Nevertheless, it is extremely valuable. The reason, as you might expect from this catalogue, is the illustrations. There are 29 etchings created by Henri Matisse. These are a minimalist sort of drawings, employing filament-like lines to create the images. This was not a collaborative effort, Mallarmé having died several decades before Matisse provided his drawings. Therefore, it naturally is signed only by the artist. It is one of 145 copies. Item 48. $75,000.