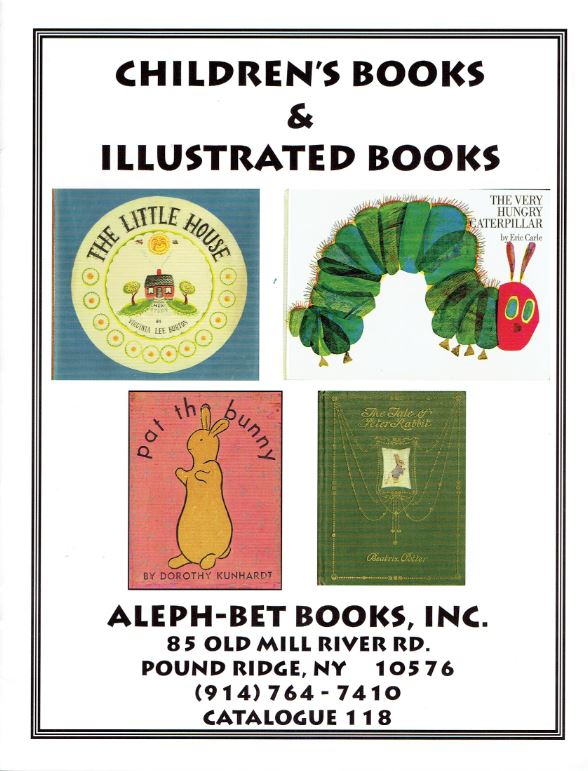 Aleph-Bet Books has published a new catalogue of Children's Books & Illustrated Books. These are the books that have fascinated children for ages, and which adults have used to mold and propagandize them. Most pointed children in the right direction, or simply entertained them, but there are some very ugly ones here too. Children don't naturally hate, they need to be taught. Here is where children were taught racism and Nazi beliefs, along with morality, generosity, and good behavior. It all depends on your teacher. Here are a few of them.

Kids, did you ever wonder what your toys do when you're sleeping? No, they don't just sit there on the shelf or floor or wherever you left them. They come alive and partake in all sorts of fantastic adventures. I'm not sure whether this is a concept that will excite children's imagination or terrify them. Toys really aren't supposed to behave this way. Item 14 is a story of anthropomorphised toys by E. L. Shute, published in 1904. The title is What the Toys Did! Perhaps this isn't quite so scary because this story in verse is supposed to be little Freddy's dream, not real. E. L. Shute and her husband were good friends with the better known author, Lewis Carroll, and he gave some of her books to his “child friends.” Priced at $475.

We all know of Helen Bannerman's Little Black Sambo, for better or worse. She meant no harm, couldn't have foreseen what it would come to represent. Her Sambo was actually a native of India, not of Africa or an African-American. Unfortunately, the success of Sambo led her to write some more “Little Black” books, including Little Black Quibba. Unpublished was another book she wrote, left incomplete and in loose notes when she died. Strangely, this one uses the name “Quibba” again, but the title is The Story of Little White Quibba. Ms. Bannerman died in 1946, but her daughter, Day, completed the book and had it published in 1966. It is essentially a retelling of the Sambo story except the heroine is now Caucasian. All of this leads to the eternal question about Ms. Bannerman's otherwise harmless stories – why on earth did she have to make race a part of them? Item 25. $200.

This may be a happy book, but there is terrible tragedy behind the story. The title is Buch der Erfullten Wunsche (Book of Wishes), the author Tom Seidmann. That wasn't exactly a pseudonym, though it somewhat hides the author/illustrator's identity. She was born Martha Gertrude Freud, married Jankew Seidmann, and adopted the first name “Tom.” You could easily have confused her gender. Ms. Freud was the niece of the much better known Freud, Sigmund. This book is very rare, which can readily be explained by its publication date – 1929. This was Germany, and Freud-Seidmann was Jewish. Her books were soon removed from bookstores on that account. That same year, Jankew Seidmann killed himself, and the deeply depressed Freud-Seidmann died of an overdose of sleeping pills the following year. This was her last book. Item 128. $3,500.

As bad as things were in Germany in 1930, they would only get worse. This next one is entitled Trau keinem Fuchs auf grüner Heid und keinem Jud auf seinem Eid by Elvira Bauer. Published in 1936, when the situation had gone from bad to worse, though still having far worse to go, the title translates to “Trust No Fox in the Green Meadow and No Jew on his Oath.” The title was based on a quote from Martin Luther. Bauer was an 18-year-old art student and kindergarten teacher and Nazi supporter. What became of her is unknown, as obviously she did not seek credit for her work after the war. The publisher was the newspaper Der Sturmer and its owner, Julius Streicher, who was executed after the war for crimes against humanity. This is an extreme example of children's books being used to teach hate and racism to children. The ugliness of this book is beyond description. It is filled with every hideous stereotype and hateful lie imaginable, with artwork to illustrate the point. After God cursed the lazy, whining Jews in Egypt, their father, the Devil, took them to Germany, apparently the actual route of the Exodus. They are dishonest, greedy, sexual predators, constantly cheat good upstanding Germans, killed Christ, are all going to Hell, and on and on. The book was considered too crude even for official Nazi publishers, but was satisfactory for Streicher's standards. This book was used with children as young as six and one can see how some would turn out messed up. Item 205. $3,500.

If you are one of the many Winnie The Pooh fans, or a collector, you may be fortunate enough to have a first edition. They aren't particularly rare, though expensive in top condition (children don't treat their books well). You might even have a signed edition. Here is the best, and unless you are one of no more than 20 people, you don't have this one. Item 191 is a first edition of Winnie The Pooh by A. A. Milne, published in 1926. What distinguishes this from ordinary run of the mill (or of the press) copies is it was printed on vellum. Only 20 copies were so printed, this one being No. 9. It also has a full vellum binding. The book has been signed by both A. A. Milne and illustrator E. H. Shepard. $57,500.

Aleph-Bet also has a copy of the 1926 limited first edition of Winnie The Pooh on handmade paper. There were 350 numbered copies of this version printed, this being No. 235. It is also signed by both Milne and Shepard. Item 190. $16,500.

For those of you with fond memories of Dick and Jane, here is a book you won't come across often. This copy is large, meant to be opened for display. It may not quite be an Audubon double elephant folio, but even one elephant is an impressive size. This is Big Book: Our New Big Book, published in 1951. It was meant to be opened and put on display in classrooms. However, you will find something different about this book. Their names are not Dick and Jane. Rather, they are John and Jean. Sally has become Judy. Why? Beats me. Perhaps their names were changed to protect the guilty. This edition was not meant for public schools. Instead, it was intended for parochial schools. I don't know why they had to have different names in parochial schools. They were still the same annoying dumbed down children we all came to “love.” Do parochial school kids not know who Dick and Jane are? Here is the good news. Spot and Puff still have their “real” names. So, you can still be inspired by “Run, Spot, Run,” even if the speakers are John and Jean. Item 101. $1,850.