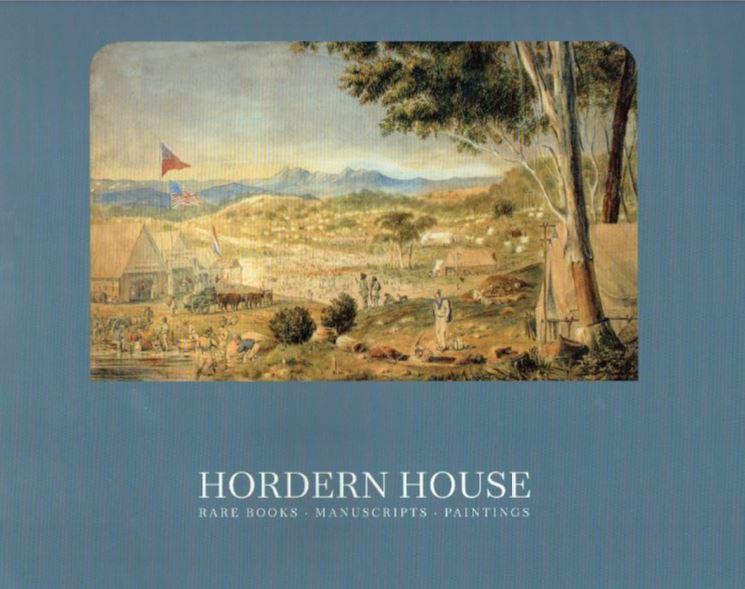 Hordern House has issued a new untitled catalogue. You will need to look through it to know what sort of material you can find. Here is a brief preview. Hordern House is located in Sydney, so you can expect many items will be related to the Australian nation/continent. However, other items extend beyond that reach, although the concentration is still on the Southern Hemisphere. You will find circumnavigations by Cook and others that took them far south. There is even the official account of the American Wilkes Expedition, America's first serious entry at seafaring exploration. It covered a lot of ground (or water), but it is best known for its discoveries in Antarctica. From Australia, most material comes from early in the land's history, as these are antiquarian books, and Australia was only settled relatively recently. These are a few of the books and related items you will find in this collection.

Here is something you don't find everyday – a newly discovered first-hand manuscript from one of Captain James Cook's momentous voyages, over two centuries ago. It is described by the author as an “abridgment” of his journal. It contains 3,000 words, covering Cook's second voyage up through its stop at the Cape of Good Hope on the way home. It may have been written there. The writer is anonymous, but evidence within the manuscript indicates it may have been John Langford, a junior sailor on the Adventure. The Adventure was commanded by Capt. Tobias Furneaux, while Cook commanded the Resolution. Most notable on this journey was that it penetrated the Antarctic Circle, seeking the the great southern continent many in the day believed must exist. It didn't (though there is a smaller Antarctica) and it was Cook's voyage that put this myth to rest. Cook and Furneaux became separated in the fog and it was Furneaux's ship that explored and mapped the south and east coasts of Van Diemen's Land (Tasmania) during the voyage. The writer describes major events from the trip, including picking up island native Omai who returned with them to England, and the massacre of ten sailors when they received a less-than friendly welcome by the Maori people at Queen Charlotte's Sound in New Zealand. He also provides a map of the Southern Hemisphere reflecting the still limited knowledge of the continent then referred to as New Holland. Item 10. Priced at AU $47,500 (Australian dollars, or approximately $32,128 in U.S. dollars).

If you would like to see the world as it looked in the late 16th century, this is one of the best maps of its time. The world has changed a lot since then. Item 42 is Typus Orbis Terrarum, the work of one of the great Dutch mapmakers of the time, Abraham Ortelius. It is dated 1587, but was issued in 1592. It is based on the knowledge, not always accurate, of the early explorers, along with some obvious guesswork. However, the continents are easily recognizable. Substantial accuracy can be seen in the shapes of Europe, Asia, and Africa. South America is more distorted though similar, as is North America, though the latter's size is exaggerated. It is shown as large as Asia. The east coast was reasonably understood then, but the west coast and inland continent were still mysteries. California is shown, accurately, starting as a peninsula. The myth of California as an island came later. What is most striking, and why Cook's second voyage was so important for its discovery, is Ortelius' map displays the mythical great southern continent. It is huge. It was believed that there must be equal amounts of land both north and south of the equator, and the only way to balance the larger northern continents was with a huge one encompassing the South Pole. Cook would disabuse cartographers of this notion. In a hopeful guess, Ortelius has shown a passageway, albeit at times narrow, between the North American and Asian continents and the Arctic, encouraging the centuries of fruitless exploration to find a navigable Northwest and Northeast Passage. AU $9,750 (US $6,572).

Speaking of Capt. Cook's second voyage, here is an account by a midshipman on that voyage... Not. Hordern House describes this as a “first edition of one of the scarcest – and oddest – pieces of the entire Cook literature, now widely recognized as the first New Zealand novel...” The title is The Travels of Hildebrand Bowman...written by himself; who went on shore in the Adventure's large cutter, at Queen Charlotte's Sound New-Zealand, the fatal 17th of December 1773. There was no Hildebrand Bowman on the Adventure, and most of this tale is fantastic fiction. However, it does start from the factual event of Cook's Second Voyage and the massacre at Queen Charlotte's Sound described in the earlier manuscript. Once arriving, the tale becomes Gulliveresque. The premise is that Bowman went on shore with the ten sailors who were killed, but at the time of the massacre, he “escaped being cut off and devoured, with the rest of the boat's crew, by happening to be a-shooting in the woods, where he was afterwards unfortunately left behind by the Adventure.” Bowman then travels to various fictional provinces of New Zealand. What is less obvious to readers today than it was in its time is that these fictional provinces, such as Bonhommica and Luxo-Volupto, refer to real places and people. “Bonhommica” is Ireland, “Luxo-Volupto” the highest and lowest elements of London society. The Armoserians are Americans, and this is also a commentary on the American Revolution, taking place at the time of publication (1778). Some Luxo-Volupto think the Armoresians are ingrates to the mother country, others oppressed and unfairly taxed subjects. Ultimately, the author says, neither of these is the cause of the revolution, but rather, that they are so entrenched in their disputes that if one side conceded the point, they would immediately start fighting over something else. Among the fantastic sights, and this is illustrated, is the flying prostitutes. Apparently, their bad behavior caused them to grow wings, useful for taking their clients off to their business premises. The anonymous author was long thought to be John Elliott, a midshipman on the Resolution during Cook's second voyage, but recent arguments have favored Robert Home, an English painter. Item 9. AU $18,750 (US $12,640).

Next is the Narrative of the United States Exploring Expedition... published in 1845. This is better known as the Wilkes Expedition for its commander and author of this account, Charles Wilkes. Actually, he had some help as it is six volumes. This was a four-year undertaking to gather oceanographic and scientific data. The crew visited many places while trolling the ocean for four years, including South America, Australia, the Philippines, Hawaii and the west coast of North America. However, its most notable discoveries came from Antarctica, where little was then known (probably because few wanted to visit the place). Not only did the Wilkes Expedition bring back much information in the field of natural history, it also afforded great prestige to America, which up to that time, had done little exploring away from home. Item 53. AU $13,650 (US $9,188).