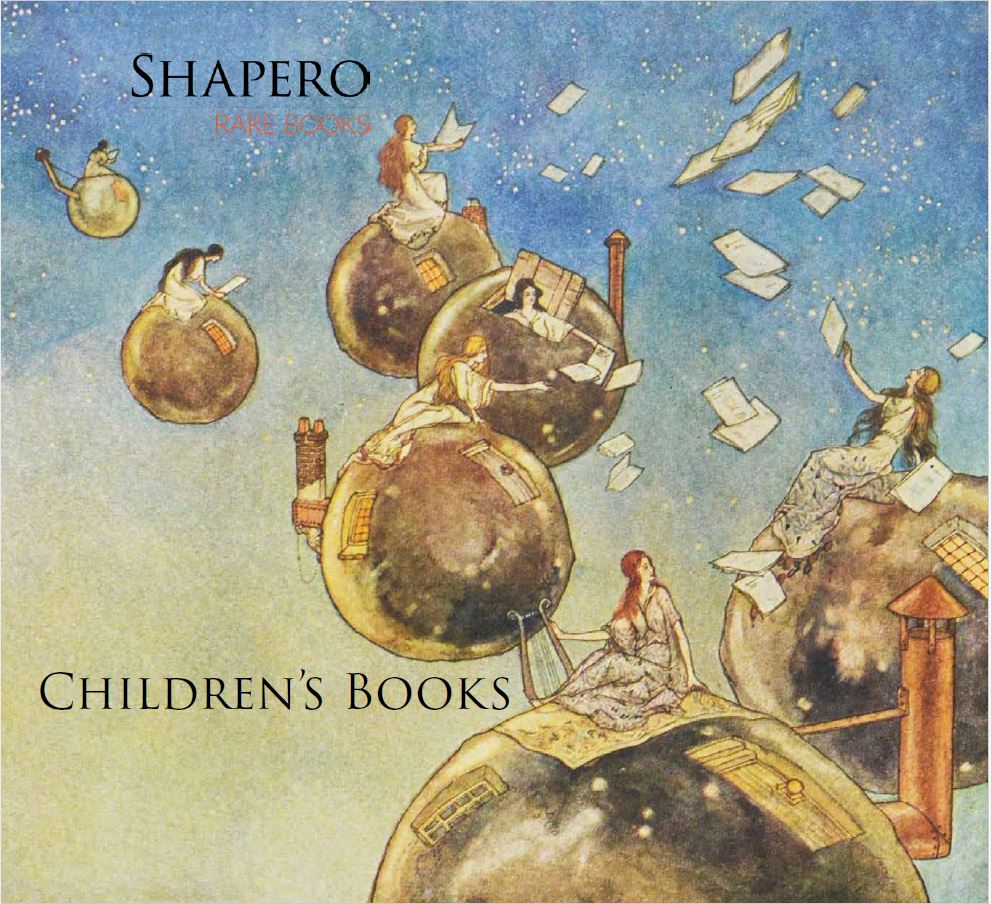 Oh to be young again! Shapero Rare Books is offering a new catalogue of Children's Books. It is filled with familiar names whose books you read once upon a time - Seuss, Milne, Potter (Beatrix, not Harry), Rowling (your kids read her even if she came along too late for your youth), Carroll, Disney, Sendak, and Baum. Other names are more obscure. Some you don't always associate with children's books, such as Ian Fleming, or how about a Darwin? They're all here and more, and no, you can't be young again, but you can remember. These books will help do that. Here are a few samples.

We begin with a story that is something like what you would expect from its author, but also different. The author is L. Frank Baum, and this book is not Kansas, nor Oz for that matter. It is the story of a boy who is fascinated with electricity. The title is The Master Key: An Electrical Fairy Tale, Founded Upon the Mysteries of Electricity and the Optimism of Its Devotees. It was published in 1901. That was the year after the publication of the first of the Oz books. In this story, the protagonist is a boy who is constantly playing with electrical devices. He gets a bit careless and sets off a reaction that opens the master key to electricity. It makes its presence known through the Demon of Electricity. The Demon promises three gifts a week for three weeks, and when the boy does not know what to request, the Demon makes the choices. In hindsight, we now know that many of the fantastic gifts he brought are things that have since been created by technological advances since 1901. There are gifts that provide communications around the world like a cell phone, news from everywhere like the internet, body armor, a taser-like device, and some things not yet created but coming soon, such as a pill that provides enough food for a day. Ultimately, the boy concludes society is not yet ready for all of this, and our use of some of these things today makes it questionable whether we are ready for them yet. Item 8. Priced at £380 (British pounds, or approximately $474 in U.S. dollars).

Here is a book that is even less expected for its author. If a Fleming or Darwin writing a children's book is surprising, how about Dr. Seuss writing one for adults? The dust jacket notes this is a good book to buy for your children, so long as you give it to them for their 70th birthday. The title is You're Only Old Once! A Book for Obsolete Children. It was Seuss' last book, published in 1986, when he was 82 years old. Seuss had spent more time than he liked in hospital waiting rooms. He began sketching the machines he saw in typical Seussian fashion. The result is now even old folks can read a Dr. Seuss book without feeling guilty. Besides, if you have to go to a hospital, who would you rather have as your attending physician than Dr. Seuss? This copy has been signed by the Doctor himself. Item 96. £580 (US $723).

Usually, an edition of a book encompassing the 82nd thousands of copies is not the most desirable. This is not, obviously, a rare or valuable book on its own. However, an inscription can change that judgment in a hurry. Item 24 is Alice's Adventures in Wonderland, published in 1886, two decades after the first edition. This copy was inscribed by Lewis Carroll (pen name for the author and mathematician Charles Lutwidge Dodgson) to "Ida Georgina Weddell from the Author Sep. 15 1886". As usual, Dodgson/Carroll got around the name issue by inscribing it from "the author." Weddell and her siblings were young neighbors of "the author" at the time. They fit into the category of his many "child friends," the nature of whose relationships with Carroll remain a subject for endless speculation and interpretation by scholars. £3,900 (US $4,846).

It's not that obscure that Ian Fleming wrote a children's book (Chitty Chitty Bang Bang), but who was the Darwin? The answer is Bernard Darwin. If Bernard doesn't ring a bell, and it probably doesn't, he was closely related to the one you do know. He was Charles Darwin's grandson. He was the son of Francis Darwin, who worked closely with his father in the latter's later years. Bernard grew up in Charles and Emma Darwin's home. His mother died shortly after his birth. He was a journalist and writer, but even so, the children's book is somewhat surprising. Bernard was a very good amateur golfer and most of his career was spent as a journalist and book author on topics related to golf. However, he and his wife, Elinor, wrote some children's stories and these are two of them: The Tale of Mr. Tootleoo (1925) and Tootleoo Two (1927). The provenance of these books is shown by the signature on the first volume, Henry Blofeld (aka "Blowers"), a fellow sports journalist focused more on cricket. Item 38. £275 (US $341).

Here is a book that Shapero describes as a "modern classic of children's literature." The title is The Phantom Tollbooth, by Norton Juster. You might think it is about one of those cameras that have replaced real tollbooths, that photographs your license plate and sends out a bill. However, thankfully, those did not yet exist in 1961. It is the story of a bored boy who passes through a phantom tollbooth into a magical world. It has been compared to the previously mentioned Alice or Oz books, but this world of strange logic is based on language and math play and puns. So, Milo (the boy) starts out in a town called "Expectations," gets stuck in "Doldrums," befriends a dog with clocks on his side ("a watchdog"), passes the "Mountains of Ignorance," and is served a meal where people get to eat their words. Juster's purpose was to encourage young people to think, and the greatest piece of wisdom Milo learns is there is much exciting going on right here in the world he previously thought was boring. After a stint in the navy, Juster rented an apartment in New York and got a job as an architect. While he wrote several books along the way, his primary career remained as an architect and professor of architecture. He rented that apartment in New York with two other young men, one of whom was Jules Feiffer, one of the greatest cartoonists of the past 60 years. Feiffer supplied the illustrations. This is a first edition, first issue, with the first issue dust jacket, signed by Juster. Incidentally, both Juster and Feiffer turned 90 this year. Item 58. £1,500 (US $1,865).