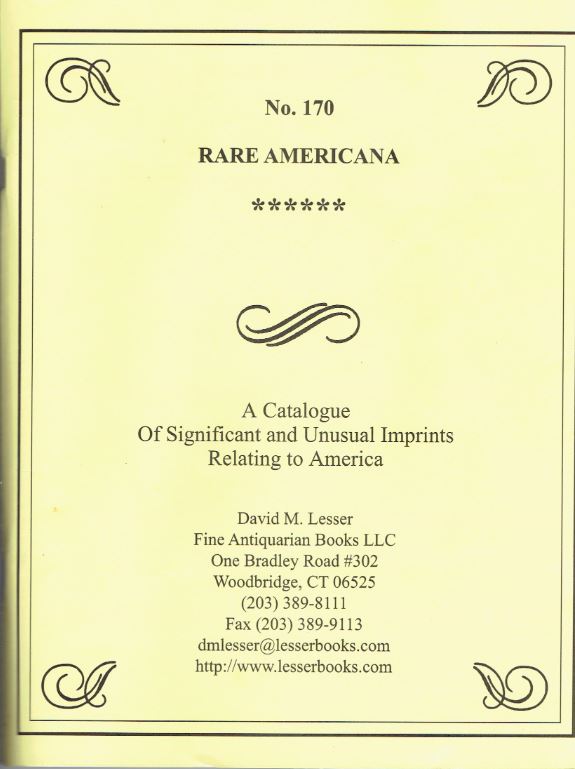 David M. Lesser Fine Antiquarian Books has issued a new catalogue of Rare Americana, their Catalogue 170. The material is similar to other Lesser catalogues, but the individual items are new. Lesser specializes primarily in pamphlets and ephemeral items, less than full book length, with the focus being Americana from late Colonial times to Reconstruction. Politics and religion are major topics, but there were many other things going on in America which also make their appearances. Much of it remains fascinating today, perhaps because so many issues from long ago have their counterparts today. Here are a few selections.

Before there was a fake news New York Times, there was a fake news New York Herald. Item 22 is the New York Herald from September 6, 1861, which boldly announces "The Death of Jefferson Davis." It reports, "Your correspondent has this moment...received special despatch, from a reliable source, dated Louisville, Kentucky, Sept. 5...which confirms the announcement of the death of Jeff. Davis." A special messenger from Fort Monroe had confirmed flags had been flying at half-mast for several days. Another source said Davis had been seriously ill for several days and "little hope was entertained of his recovery." This is followed by a biographical sketch of the supposed new President, Confederate Vice-President Alexander Stephens. Of course, we now know that the news of Davis' death was greatly exaggerated, the "reliable" source was not reliable, and the Herald was propagating fake news. Or, perhaps from their standpoint, it was wishful thinking. Davis was quite alive and would continue to be so for another 28 years. Perhaps we can be more gentle and simply say the New York Herald was ahead of its time. Priced at $150.

Item 131 is a printing of A Sermon Preached Before His Excellency Thomas Hutchinson, Esq., Governor: The Honorable His Majesty's Council, the House of Representatives of...Massachusetts-Bay...May 26th. 1773. The preacher was Charles Turner, Pastor of the Duxbury Church. This was a time of deepening conflict between British authorities and the colonists and Turner was pulling no punches. He insists the people have an "unalienable right" to choose their government and leaders. He notes that the British Constitution, "once enjoyed by this province," has been "inhumanly murdered." He continues, "How distressing the thought of being slaves, how charming that of being free!" I imagine Turner's words were well-received by the Massachusetts representatives, but not by the guest of honor, Gov. Hutchinson. Hutchinson was a died-in-the-wool British loyalist whose actions against the colonists just deepened their anger and desire to rebel. The following year, he was forced to flee the colony for his own safety. $375

Here is one of the more clever arguments against the old Sunday Blue Laws I've seen. Those are the laws that prevented most businesses from operating on Sundays as recently as a few decades ago. However, this one goes back to 1831, and the target was Congress' ban on the delivery of mail on Sunday. The unnamed writer, who some have identified as Thomas Cooper, addressed the pamphlet To Any Member of Congress. He attacks the clergy for its promotion of the Sunday ban on mail delivery, pointing out that "Sunday is their day of labor; of earning money; but they forbid any one else to do so." Gotcha. Item 26. $450.

Here is a picture that will fit in your collection of portraits of American statesmen. Circa 1852-1856, 5" x 6 1/2", "printed in oil colors" is a full length portrait of Franklin Pierce. Pierce stands by a green-draped table, one hand resting on a pile of papers, the other on his hip. He is formally dressed, as befitting a President. This image should fit well between your portraits of Millard Fillmore and James Buchanan. Item 107. $450.

Here is some smart work accomplished by a group of lawyers to avert a tragedy. Through the middle of the 19th century, we were still having duels, one party feeling "dissed" by another, with the conflict being resolved by one of them shooting the other. While the pamphlet wars of the time were an imperfect but better way of handling these disputes, dueling was plain barbaric. Nevertheless, on October 20, 1849, Alexander Moseley, Editor of the Richmond Daily Whig, and William Daniel, Jr., of the Virginia Supreme Court of Appeals, were on the brink of a duel that would send one to the grave. Fortunately, four lawyers came up with this contract. Apparently, Judge Daniels made an offensive statement in a rival newspaper that Mr. Moseley believed was aimed at him. The solution, naturally, was for one of these gentlemen to kill the other. However, the lawyers wisely determined that the statement by Judge Daniel was meant merely to deny authorship of a previous article and was not aimed at Mr. Moseley. Both parties, along with the lawyers, agreed this was correct, they all signed the document, and both got to live happily ever after. Lesser has not been able to find any printed records concerning this dispute, but obviously it was resolved as Daniel lived for another 24 years and Moseley for 32. Item 25. $750.

Next is a Message from the President of the United States Transmitting Copies of the Correspondence Between the Governor of Georgia and Maj. Gen. Jackson on the Subject of the Arrest of Captain Obed Wright, December 14, 1818. The President was James Monroe, Maj. Gen. Jackson future President Andrew Jackson. If, as President, Jackson had stood as he did at this time, he wouldn't have ended up with the severely tarnished reputation he has today. The backstory to the dispute between the Governor and General was Jackson's being too far off from southern Georgia during the First Seminole War. Some hostile Indians were causing problems in Georgia, and the Governor contacted Jackson to send some troops. He was too far away, so Gov. Rabun got some volunteers and federal troops headed by Capt. Obed Wright. For whatever reason, Wright got it in his head that the leader of the hostile Indians was in the Chehaw village, though his fort commander told him they were friendly. The Chehaws were not only friendly, but they had earlier resupplied Jackson's forces and some of them had joined up with him. Wright and his men brutally attacked, burning the village, killing several or many non-resisting Indians. Indian deaths have been estimated at anywhere from 5-50. No whites died. General Jackson was furious, and hence, the correspondence from both sides with the President, which he hereby turned over to Congress at their request. Included in the correspondence was Jackson's apology to the Chehaws. Unfortunately, as President, Jackson turned a blind eye to later injustices toward the Indians, sending them off on the brutal Trail of Tears, for which his reputation has come to pay dearly. If only he had remembered. Item 151. $125.