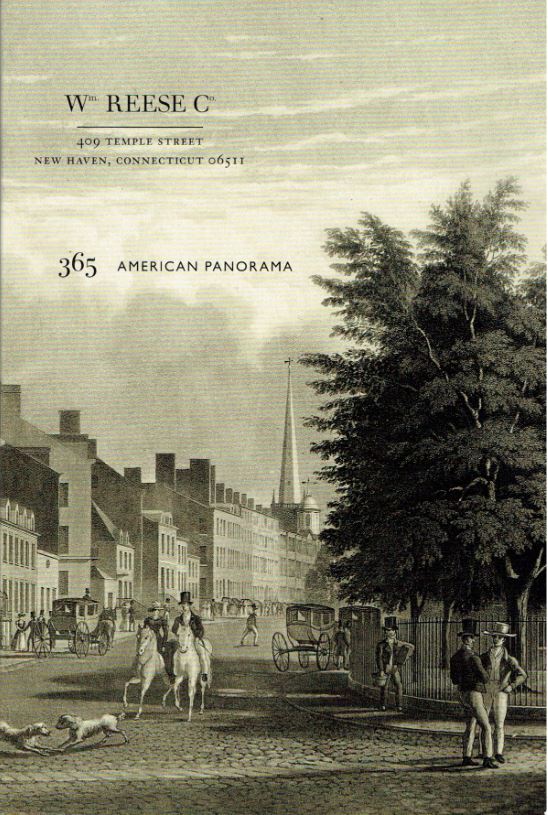 The William Reese Company has issued their 365th catalogue, American Panorama, 150 Years of American History 1730-1880. It contains 150 items, one for each year. As they explained, the catalogue is "comprised of books, pamphlets, manuscripts, prints, maps, and photographs...helping to tell the story of the development of the area that became the United States." Here are a few of these 150 stories.

We begin with the first and oldest item in the collection. Item 1 is A New and Exact Map of the Dominions of the King of Great Britain on ye Continent of North America... by Herman Moll, published in 1730. It displays what became the Atlantic states, from New England to Carolina, Atlantic Canada, and some parts of French Canada. The boundaries between French and British Canada are generously drawn in favor of British claims. The map notes Indian tribes, the fur trade, and postal routes, earning it the attribution of being the first American postal map. This is the third of five states, and the first to show the Carolina inset divided into counties and parishes. Other insets include Florida and the Deep South, and Niagara Falls. The Niagara Falls inset gave the map its familiar appellation as the "Beaver Map." The artist didn't have the greatest sense of depth, so the beavers being in the foreground makes them appear very large. Priced at $22,000.

This is one of those early "Indian Captivities." It has been described as the most popular of all. Certainly, the protagonist author sold a lot of books describing his travails. The title is French and Indian Cruelty, Exemplified in the Life and Various Vicissitudes of Fortune of Peter Williamson, a Disbanded Soldier. Containing a Particular Account of the Manners, Customs and Dress of the Savages... According to Williamson, the "savages'" manners were very bad. He was born in Scotland, where, at the age of eight, he was kidnapped and sold into indentured servitude in America. Fortunately, his master was kind, and left him money to buy a farm when he died. He settled on the Pennsylvania frontier, got married, and became a farmer. It was here that he was again taken from his home, this time by Indians. He describes conditions of mistreatment and torture. After three months captivity, he escaped, only to find his wife had died. He enlisted to fight in the French and Indian War, only to be captured again. This time, he was released in a prisoner exchange, sent back to England, and he returned to his native Scotland. He would go on to write his popular book, tour dressed as an Indian selling copies, open a coffee shop, then a tavern, become a printer, and win lawsuits against those who kidnapped him as a youth. Some scholars have challenged the accuracy of Williamson's account, with opinions ranging from containing much useful information to total fabrication. Whatever it is, Williamson was certainly a good story-teller. Item 29 is a stated "third edition, with considerable improvements," published in 1758, a year after the first edition. $9,500.

To most Americans, often blind to their own shortcomings, Indians were "savages." A few were able to see more. Quakers, in general, were more appreciative of people different from themselves. Anthony Benezet was a Quaker, and item 32 is his book, An account of a visit lately made to the people called Quakers in Philadelphia, by Papoonahoal: an Indian Chief, and several other Indians, chiefly of the Minisink Tribe, published in 1761. Papoonahoal was a chief who had developed his own moral system, which led him to free three white prisoners and return some stolen horses his tribe had purchased from a rival. He was seen by whites as a wise leader, undoubtedly in part due to his willingness to accept Christian doctrines. While he was a wise and moral man, so was author Anthony Benezet. Benezet would later be known as one of the most important early American abolitionists. $11,000.

Americans like Benezet would certainly have been reading bibles, but they wouldn't have been ones printed in America. Prior to the Revolution, the Royal Printer had a monopoly on printing English language bibles. Bibles were printed in America as far back as over a century earlier, but these were editions printed in Indian languages, used for conversions by missionaries, and later, German editions for German-speaking immigrants. Once the Revolution was won, naturally, the British monopoly was over. Item 53 is The Holy Bible, Containing the Old and New Testaments, printed and published by Robert Aitken in Philadelphia in 1781-1782. This is the first complete bible in English printed in America. Aitken secured the official endorsement for his bible from the Continental Congress. This copy belonged to, and was signed in 1783 by, Joshua Coit. He was a Harvard graduate and a congressman from Connecticut from 1793-1798, when he died. $150,000.

Here is another American first, but this one is not about God. No, it's about the bad guy from the Garden of Eden - the serpent. Technically, we can call this a treatise on American herpetology. It is the first book about snakes printed in America. Benjamin Smith Barton's book, printed in 1796, was printed for private distribution only, so it is extremely rare. The title is, A Memoir Concerning the Fascinating Faculty which has been Ascribed to the Rattle-Snake, and Other American Serpents. Speaking of fascinating faculty, Barton was one of the first professors of natural history in America, teaching at the University of Pennsylvania. He was also a physician and renowned botanist. This copy was given by Isaac Hays, ophthalmologist and one of the founders of the American Medical Association, to the Franklin Institute in Philadelphia. Item 67. $6,500.

Here is a book of historic illustrations, Chicago Illustrated 1830-1866. Literary Descriptions by James W. Sheahan Esq. Illustrations by the Chicago Lithographing Co. It contains 52 tinted lithographic plates, published 1866-1867. What makes it particularly historic is that it was published a few years before the Chicago Fire of 1871. So much of what is depicted was destroyed in that great conflagration. Thank you, Mrs. O'Leary's cow. This copy also includes the prospectus, stating that it would provide "striking evidences of the City's improvement and enterprise." It was to be issued in 25 parts, each with at least four views, for a total of 100. However, only 13 parts were issued, so it contains only 52 such plates. It was not the fire which caused its premature conclusion since printing stopped four years before the Great Fire. Ironically, one plate depicts the "Great Fire on Lake Street," which occurred in 1866. Item 138. $40,000.