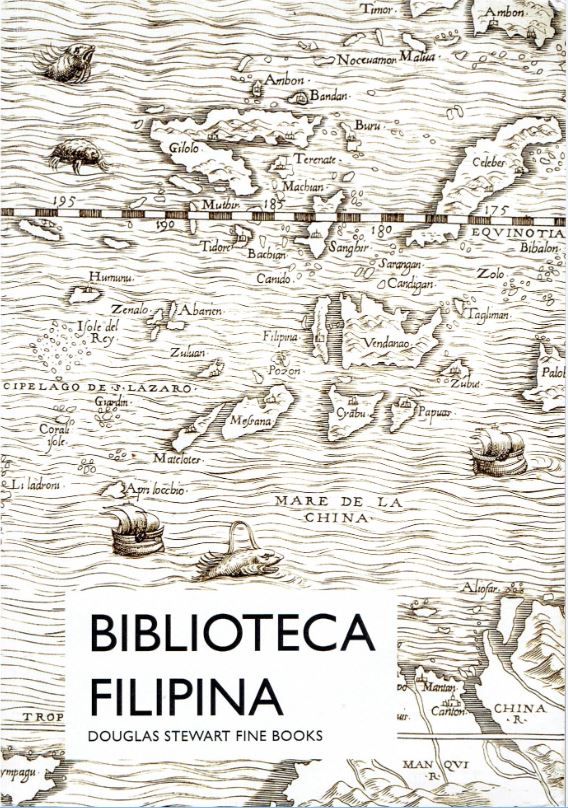 Douglas Stewart Fine Books has published a catalogue of Biblioteca Filipini. This is the first time in many years of writing reviews we have received a catalogue of Philippine books. It is the first received that has had more than a scattered Philippine item or two. This is a must-see for those interested in the history of this large Western Pacific archipelago off the coast of Southeast Asia. What is remarkable is the amount of very early written history about this land that would play a major role in American history much later - the 20th century. Most of the early material came from missionaries, Catholic orders including the Jesuits, Dominicans, Franciscans, Benedictines and Augustinians. The missionaries were mostly Spanish. The Philippines were "discovered" to the West by Ferdinand Magellan on the first circumnavigation of the globe. Magellan died there attempting to convert some unwilling natives. The Philippines remained part of the Spanish colonial empire until ceded to America after the Spanish-American War. It was temporarily controlled by Japan during the Second World War, but after that war became an independent nation. All but a few items in this catalogue relate to the Spanish period, from the 16th century to the end of the 19th. Here are a few samples of them.

We begin with the life of a remarkable woman, one of the early missionaries to the Philippines who one might today consider a feminist considering her determination to overcome gender-based obstacles. Jerónima de la Asunción was a nun in her hometown of Toledo, Spain, when she learned her order was planning to establish a monastery in Manila. She applied, and after a lengthy wait, was approved to lead a small group of sisters. This was quite an undertaking in 1620. There were no flights then. It was an arduous sea journey and Mother Jerónima was already 66 years old, about double the normal lifespan in those days. She sailed from Spain, then landed in and crossed Mexico, to take the next galleon to Manila. The journey took over a year and three months. She then proceeded to build the first monastery, not just in Manila, but all the Far East. Her intention was to allow any woman of sufficient devotion to join with them, but her male counterparts refused, deciding monasteries should only be open to those of Spanish blood. Mother Jerónima nevertheless developed a loyal following among the Philippine natives, some of whom saw her as a miracle-worker and seer. She planned a second monastery for native women, but died in 1630 before this was realized. Item 12 is an account of her life, Perfecta Religiosa: Contiene Tres Libros, by Bartolomé de Letona, published in Mexico in 1662. It contains some of Mother Jerónima's writings and a 34-page prologue describing her journey. The prologue was ordered removed as Spanish authorities felt it gave out to much navigational information to their adversaries, but the suppression was not very effective. This copy contains the prologue. Priced at $2,500 (the price list is in U.S. dollars though Stewart is an Australian bookseller).

Although the Philippines are far from Europe, that was no guarantee the islands would not be drawn into European rivalries. Here is an account of one such instance, Celebres triunfos, victorias milagrosas, consagradas a la Sacratissima Virgen del Rosario Maria S.N. (celebrated triumphs, miraculous victories, consecrated to the sacred Virgin of the Rosary Mary). The Dutch and Spanish were rivals for trade in Asia, with the Dutch wishing to push their competition away. For years they plotted, and in 1646 sent a large fleet from Batavia (Jakarta) to capture Manila, believing it weakly defended. A series of naval battles followed, but somehow the few Spanish ships, with help from natives on land, were able to drive the Dutch away. The author was Father Juan de Cueca. He had delivered an inspiring pep talk on one of the Spanish ships, promising the sailors that God and His Holy Mother would protect them and that they would be victorious. Father de Cueca also promised to walk barefoot to the Shrine of Our Lady of the Rosary if Mary delivered, which she did. Father de Cueca and others kept their part of the bargain, making the trek. Local ecclesiastical authorities declared the outcome a miracle. Published in 1647, this is the only known copy of de Cueca's account of the battle. Item 9. $27,500.

By the late 18th century, the Philippines were well established as a Spanish colony and the population was predominantly Catholic, the outcome of missionaries who began coming from Spain two centuries earlier. As a result, the Philippines took part in celebrations of events in Spain. Item 73 relates to one such celebration, Oracion Eucharistica que en accion de gracias por el nacimiento de los Serenisimos Infantes, by Basilio Sancho de Santa Justa y Rufina. Santa Justa was the Archbishop of Manila. Published in 1784, it celebrates the birth of twin grandsons of King Charles III. Their father was the future Charles IV. This was a significant event as both of the future King's sons had already died young, so prior to the twins' birth on September 5, 1783, there was no male heir to succeed to the throne after the King's son died. This twin birth just doubled the odds of a long-term male successor. Alas, it did not turn out that way. Heirs Carlos and Felipe died within a month of each other, barely past their first birthday. However, shortly before their deaths, a fifth son was born who would later become King Ferdinand VII. $1,250.

The Philippines may have been a Spanish possession, but in the early 19th century, Spain itself became in part a possession of France under Napoleon. It's no wonder that the Governor, José Gardoqui, would be supportive of England which fought Napoleon. However, at this time England also got into a war with America, the War of 1812. While this war probably mattered little to Spain or the Philippines, the Governor wanted to reassure the British that he was their friend. Item 83 is a draft of the Governor's letter, dated September 15, 1813, to Vice-Admiral Samuel Hood, Commander in Chief of British Naval Forces in Asiastic Seas. Gardoqui writes, translated from the original Spanish (Maggs Bros. 1922), "I am extremely well informed of the proceedings of the Government of the United States of America, and in consequence of what I have ascertained through the Spanish Regent, I can and must assure Your Excellency, that you may have full confidence, that if any armed vessels, belonging to the United States were to arrive in harbours under my command, they will never be assisted in any way, that might inflict even the slightest prejudice to the British nation, with whom we remain in faithful alliance." Presumably that won Gardoqui some brownie points with the British. $8,500.

By the late days of the 19th century, the Philippine people had had enough of colonial rule and were ready for independence. They saw America as an ally. Meanwhile, America went to war with Spain, the Spanish-American War, and while the action was focused on Cuba, America had little trouble seizing the Philippines from Spain. The Philippines did not get their independence as hoped until the end of World War II. Item 99 is a photograph album from the early days of America's take over. The title is Picturesque Manila, by G. M. Peters. This is the 1899 greatly expanded second edition. It contains 61 captioned plates plus maps. This is a presentation copy, inscribed by the author to Col. James E. Barnett of the Pennsylvania National Guard who took part in the Spanish-American War and Philippine Insurrection. $1,500.