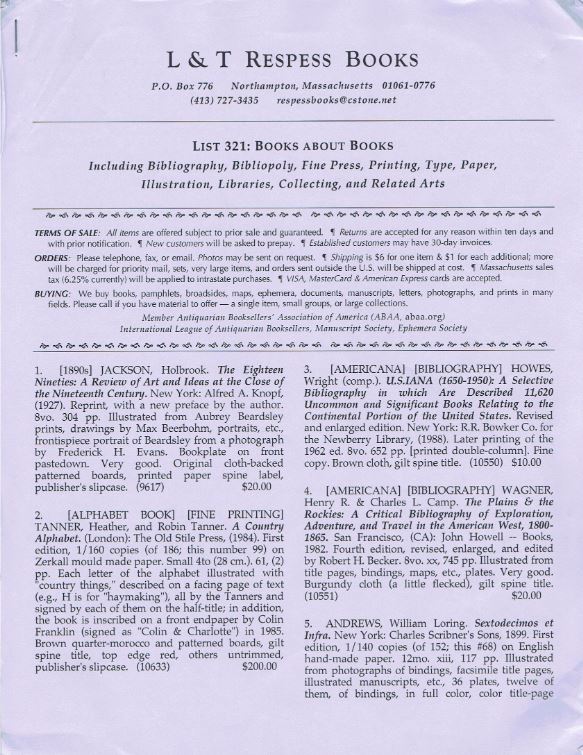 L & T Respess Books has issued their List 321: Books About Books. The subtitle is Including Bibliography, Bibliopoly, Fine Press, Printing, Type, Paper, Illustration, Libraries, Collecting, and Related Arts. "Books about books" is that field that focuses on aspects of books other than their text. It generally falls into two categories, books as art, and information about books. Books as art covers fields such as fine press work, illustrations, type and fine paper. The informational aspect includes bibliographies and advice on collecting or bookselling, textual to be sure, but not focused on the text of the books being described. Respess offers 189 books, occasionally ephemeral items, in this field. Here are a few samples.

We begin with a thorough account of the life, career, and collection of a person who is still regarded as perhaps the greatest collector ever. Also, possibly, the most eccentric collector there ever was too. If the term "bibliomaniac" applies to anyone, then surely it describes Sir Thomas Phillipps. Phillipps was a 19th century British collector, a man of means, but not enormous wealth. Building a collection of this size was a financial stretch for Phillipps, who regularly found himself balancing debts and fighting to stay a step ahead of bankruptcy. Phillipps' aim was to collect every book and manuscript ever printed or created, and while such a task is impossible, he must have come as close to that goal as anyone. The 40,000 books he collected was certainly impressive, but even more notable were the 60,000 manuscripts he amassed. Manuscripts were not deemed as important in those days, but Phillipps was a preservationist as well as a collector and wanted to keep these elusive writings from disappearing forever. An enormous number would have been permanently lost but not for the work of Phillipps. Ironically, despite his wishes, Phillipps' collection was sold off after his death, rather than being kept together. The auction sales went on for over a century after he departed this Earth. While he was around, Phillipps filled his large home with books and manuscripts, to the point that he could barely get around, moving between passageways carved out among the piles of books and documents. A. N. L. Munby estimates Phillipps spent £200,000 - £250,000 on his collection, a lot of money in the mid-19th century and more than logical for a man of his means. Item 123 is the complete five-volume set of Munby's Phillipps Studies, published 1951-1960. Priced at $300.

Booksellers like to cite bibliographies in which the books they are selling appear, it being a sign of importance. If there is one bibliography they like to cite above all others, this surely is it, Printing and the Mind of Man: A Descriptive Catalogue Illustrating the Impact of Print on the Evolution of Western Civilization during Five Centuries. If a book appears in this bibliography, you know it is of great importance. Published in 1967, Printing and the Mind of Man was based on an exhibition in 1963 designed to show the importance of printing to the expansion of human knowledge. From the exhibition, this bibliography was edited by original participants John Carter, Percy H. Muir and others. It includes line drawings and title pages from 424 books, "which, for the ideas they brought to the world for the first time, are of prime importance to the mind of man." Item 50 is a first American edition of PMM, circa 1967. $150.

This next book is a biography of a book rather than a person. By Waldemar Fries, the title is The Double Elephant Folio: the Story of Audubon's "Birds of America." The massively large first edition of Birds of America was published in parts from 1827-1838. This was an undertaking by the naturalist and author as massive as the book itself. Audubon traveled around America for a decade sketching his birds and sailing to England to supervise its production and printing. He also had to convince people to subscribe to what was a very expensive book in parts. Ultimately, he made very little money from his enormous undertaking until he published a smaller, octavo edition that regular people could afford to buy. Audubon's first edition is rare, but not enormously so, but its size and beauty is such that it accounts for several of the highest prices ever paid for a book at auction. It always sells for millions of dollars, sometimes double digit millions if the condition is good enough. Fries tells the complete story of the book, from when it was first conceived by Audubon through its production and sale. It is illustrated from photographs, old advertising, and more, containing 500 pages. It also contains a census of copies known to exist at the time of this book's publication, 1973. It is believed 200 copies were printed and sold, and the most recent figures I have seen are that 123 copies are known to still exist. Item 11. $75.

This is a book by a couple of New York booksellers whose names will be well-known to those who plied the trade during the twentieth century. The title is Old & Rare, Thirty Years in the Book Business. The authors were Leona Rostenberg and Madelaine B. Stern. At the time of publication, circa 1974, the two had been selling books together for three decades. Ms. Rostenberg had been in the trade even longer, starting in the 1930s, before teaming up with Ms. Stern. Their ability to carry on in the bookselling field at a high level in New York at this time was a remarkable feat. After all, this goes back to the 1940s, and women just didn't do such things then. This was a man's game and they had to be very good to compete where women were not particularly welcome. They were known as sleuths, competing against men by being able to track down great books on trips to Europe and around America. The two also wrote books together and their sleuthing led to the discovery that the novels of A. M. Barnard were actually written by Louisa May Alcott pseudonymously, thereby adding to Alcott's bibliography. Amazingly, this thirty-year career review would prove to be only the halfway point. The "Bookends" remained in business together until 2005, when Ms. Rostenberg died at the age of 96, Ms. Stern passing two years later at 95. Item 168. $50.

A. S. W. Rosenbach was another of the most notable of the twentieth century booksellers, perhaps the best known of the first half of that century. He purchased and sold at the highest level and his customers were the greatest and wealthiest collectors in America. He also was a collector himself, and interestingly, among his few personal favorites was children's books. His interest in books of the young led him to write this bibliography, Early American Children's Books. The foreword is by one of those great collectors of the time, A. Edward Newton. The books described herein were part of Rosenbach's collection. Published in 1933, this is copy #67 of 585 and is signed by Rosenbach. Item 56. $125.