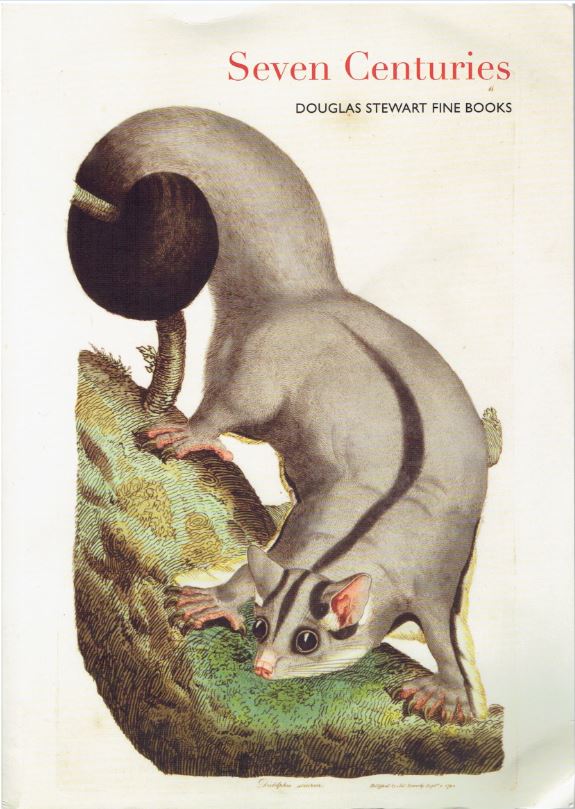 Douglas Stewart Fine Books has issued a catalogue entitled Seven Centuries. It's easy to guess the meaning of this title. Seven centuries covers the entire time range of printing, from the 1400s to today. Each is represented herein. The earlier works tend to be concentrated on travel, exploration, and natural history, while later ones more reflect the field of art. Stewart is an Australian bookseller, so there is a concentration of works related to that continent and the Pacific Rim. However, the later, artistic works are largely American or European in origin. Here are a few samples from these seven centuries.

We will start with an item from the earliest of those seven centuries. It is a leaf from the Polychronicon of Ranulph Higden. This is a history of the world as known at the time of its publication, which was 1482. This book came from the press of William Caxton. Caxton was born in England sometime between 1415-1424. While he became a noted printer, he was apprenticed as a young man to a cloth merchant in the 1430s. Obviously, he couldn't have been apprenticed to a printer at that time. Around 1445, he moved to Bruges in Belgium as a diplomat, and spent many years on the continent. It was there that he learned about the newly developed process of printing. While in Europe, he printed the first book in the English language. He later returned home, and proceeded to set up the first printing press in England. His first book printed in England was an edition of the Canterbury Tales, published in 1476. He would go on to publish over 100 books in England, mostly in English, until his death in 1491 or 1492. Item 1. Priced at AU $2,400 (Australian dollars, or approximately $1,620 in U.S. dollars).

Captain James Cook's three voyages to the Pacific Rim are probably the most notable of early explorations of this area. They would lead to the settlement of Australia, previously known as New Holland, by the British. The Admiralty had a rule pertaining to the sailors who traveled with Cook. No one could publish a book about these voyages until Cook had first published the official account. A few of his seamen cheated on this, even though naval officials attempted to seize all of their notes on Cook's return. Item 9 is a rare first issue of one of these sneaked accounts. The title is A Journal of a Voyage round the World in His Majesty’s Ship Endeavour in the Years 1768, 1769, 1770, and 1771, and it was published anonymously, for obvious reasons, in 1771. However, the author has since been identified as James Magra (also known as James Matra), an American loyalist who sailed on Cook's first journey. Magra did not earn his Captain's good graces, Cook describing him as the type of person a ship could do without, "or to speake more planer good for nothing..." Evidently, Cook had the man pegged correctly as Magra illicitly published his account just two months after their return, two years ahead of the official account. Cook's first journey would find the eastern coast of Australia and Botany Bay, which would later become its first settlement. After the American Revolution, Magra proposed that Australia be used to settle American loyalists who had fled to England, but the government instead chose to settle it with prisoners. This first issue of Magra's book is noted for containing the suppressed dedication. Magra dedicated his book to naturalists Joseph Banks and Daniel Solander, in an attempt to make it look legitimate, but the dedication was removed by the second issue after Banks and Solander objected to being associated with it. AU $90,000 (US $60,748).

What is the most famous Australian children's book? I had no idea, so I will let Stewart explain: "The Magic Pudding is without doubt the most famous Australian children's book ever published." Item 56 is a copy of The Magic Pudding: Being the Adventures of Bunyip Bluegum and his friends Bill Barnacle and Sam Sawnoff, published in 1918. There is a story behind this strange book. The author and illustrator was Norman Lindsay, better known as an artist and sculptor than a children's book writer. He is also known for his drawings of nudes, which as best I know, is not something Walt Disney ever specialized in. The book came about after a debate between Lindsay and his friend Bertram Stevens, publisher of Art in Australia. Stevens thought the most popular characters in children's books were fairies, while Lindsay thought characters based on food were tops. Lindsay proved right, but only because he wrote this book. The Magic Pudding is a pudding with skinny arms and legs which, when eaten, simply regenerates itself. It also has an ornery personality, wishing only to be eaten. Among the characters are Bluegum, a koala, Barnicle, a sailor, and Sawnoff, a penguin. They possess the pudding, but the story concerns various attempts by pudding thieves to steal the Magic Pudding. The book is not only notable as a children's tale, but as an art book for adults from Lindsay's illustrations. AU $5,500 (US $3,711).

Next we have a guide to trading in China, from back in the days when trade with China was not the mess it is now. Item 25 is A Chinese Commercial Guide Consisting of a Collection of Details Respecting Foreign Trade in China. This is an "elusive" copy of the first edition of this guide written in English but printed in Canton. It was written by John Robert Morrison, a British official and interpreter in Canton. He was the son of the first Protestant missionary in China. Published in 1834, it was the only edition published in Morrison's lifetime. Second and third editions, revised by Samuel Wells Williams but still bearing Morrison's name, were published in 1844 and 1848, while the 1856 edition no longer carried Morrison's name, only that of Williams. This was a useful guide for British traders in China for several decades. AU $24,500 (US $16,536).

Here is an exciting catalogue, titled Mod fashions in Leather, Vinyl-Patent & Satin-Lastex. It is undated, but this could only be the 60s. Stewart has pegged it circa 1965. Interestingly, the 16-page staple-bound brochure has no contact information, no address. Perhaps the publisher thought it safer this way. It appears to have been produced in England since the fashions have names like "Carnaby" and outdoor shots were clearly taken in London. However, prices are listed in U. S. dollars. I'm not sure exactly what people did with this sort of clothing, but it sure looks like it must have been fun. Stewart describes this as a "stunning underground catalogue for custom-made erotic fashion, suitable for dominatrices, bondage aficionados, exotic dancers, leather and latex fetishists, and plain old attention seekers." Item 68. AU $750 (US $506).