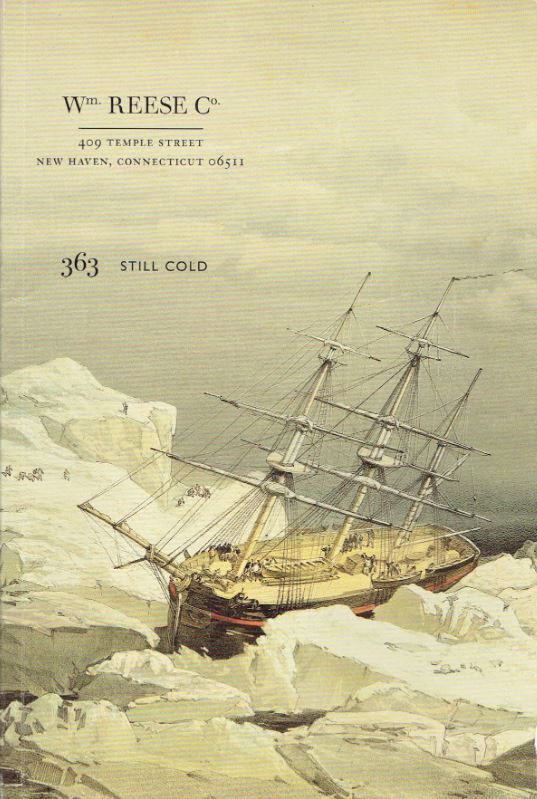 It's Still Cold in the Arctic.

The William Reese Company has issued a new catalogue entitled Still Cold. The "Still" part refers to it being a follow-up to a catalogue they published in 2003 titled simply "Cold." The chilly title is explained by the subtitle, Travels & Explorations in the Frozen Regions of the Earth. These are overwhelmingly related to journeys into the Arctic or near Arctic areas of the planet. Of course, these places are still cold, although with climate change, not quite as cold as they were a century or more ago when these travels took place. All types of explorations were conducted in those long ago days, but many of these involve two subjects in particular. One was the search to find the illusory Northwest Passage, the other to find the missing John Franklin expedition, lost attempting to find that illusory passage. Here are a few samples from this catalogue of frozen explorations.

Perhaps we shouldn't begin with the solution to one of these mysteries, but we will fast forward to the conclusion to the four-century search for a Northwest Passage. The Northwest Passage is a route from the Atlantic to the Pacific through the Arctic Ocean, north of mainland Canada. Such a route was highly sought in the days before the Panama Canal, when travel between East Asia and Europe required sailing all the way around the southern tip of South America through the treacherous Straits of Magellan. By the time Roald Amundsen finally found the passageway, construction of the Panama Canal was already underway. Amundsen's route would not create competition for the canal anyway. It is too narrow and shallow for ships of any size to navigate, and it is frozen over for all but a short period of time in the summer. However, warming seas resulting from climate change could someday create a usable alternative. Item 9 is a first American edition of Amundsen's The North West Passage Being the Record of a Voyage of Exploration of the Ship "Gjoa" 1903-1907. For all the major explorations, Amundsen had a crew of but six people and a 30-year-old ship. It proved to be enough. Amundsen's fame would become greater still when the Norwegian became the first person to reach the South Pole in 1911. Some now question whether Robert Peary's claim to have reached the North Pole on foot in 1909 is accurate, or whether Richard Byrd's claim to have flown over it on May 9, 1926 is correct. If neither is, Amundsen's airship flight over the North Pole on May 12, 1926, is fully verified, which would make him first to have reached both poles as well as discovering the Northwest Passage. Priced at $850.

Speaking of Robert Peary and his generally, though not universally accepted claim to have been the first person to reach the North Pole, item 99 is an amazing collection of photographs from the first part of his expedition. Item 99 is an album of 238 photographs taken by George Frederick Norton. Norton was an adventurer, big game hunter, and amateur photographer, who helped with the financing of Peary's expedition. He also made several hunting trips to Alaska, donating collected specimens to the Museum of Natural History and the Smithsonian, so he had some familiarity with cold climates. Norton did not travel to the North Pole or particularly close to it, but he did accompany Peary as far as Etah, which is on the far northwestern coast of Greenland. That's cold enough for most people. Many of the photos were taken aboard Peary's ships, the Erik and Roosevelt, including panoramas of icebergs along the Greenland coast. There are numerous portraits of Inuits and members of the expedition. Those include Peary and Matthew Henson, who, along with Peary and four Inuit natives, made the final journey to the North Pole. Henson is particularly notable as he was an African American and this was a time of such deep discrimination and segregation that his skills had to be extraordinary to be chosen for a journey of such importance. $35,000.

Arctic exploration was always filled with risk. This is one of those cases where risk turned to tragedy. The Jeannette was a ship fitted to test a theory of a warm Pacific current reaching far into the Arctic. A few decades before Peary's journey, an attempt to reach the North Pole via this warm current was headed by Captain George W. De Long. One of his officers was John Wilson Danenhower. They believed they could follow this current by boat to a point where they could reach the North Pole. It didn't turn out that way. North of Siberia, the Jeannette became trapped in ice. It could not be freed, and 19 months later, the ship was crushed by the ice. The 33 men on board began the arduous task of pulling three smaller boats across the ice until finally reaching the open sea. From there, they headed south towards Siberia. Unfortunately, a storm came up and the three boats were separated. One boat disappeared, never to be found, its men lost. Another, Capt. De Long on board, made it to the coast but at an isolated point. Two men were sent out to find help, and were eventually rescued by natives. They were in bad shape but were taken to a village. The third boat, with 11 on board, also made it to the coast, but these men were rescued by natives. They were reunited the with other two men, but search attempts for the others that fall were futile, and De Long and the others froze or starved to death before being found the following spring. The 13 survivors returned home, with Danenhower preparing this account, Lieutenant Danenhower's Narrative of the "Jeannette," published in 1882. It tells of the journey out and the desperate attempts to reach rescue after being trapped. Another account, by De Long (based on his notes and edited by his widow) was also published. Danenhower was already suffering from failing eyesight, a problem that interfered with his later career and depressed him. He took his own life in 1887. Item 43. $900.

In the 19th century, teenage boys weren't playing video games and the like. They were living real adventures. Daniel Weston Hall only wishes he could have spent his youth playing games. At the age of 15, he set off on a New Bedford whaler. He was badly mistreated by the Captain of the whaling ship Condor, but at least got to spend three months in Hawaii. He writes of witnessing a volcanic eruption among other things. He was already plotting his escape when the ship left for less pleasant waters, this time along the Siberian coast. Here, he finally made his escape, to a Russian penal colony. Obviously, his treatment must have been really awful for this to be an improvement. Eventually, he was rescued through the efforts of his father back home. Item 58 is Hall's account of his adventures, Arctic Rovings: Or, the Adventures of a New Bedford Boy on Sea and Land, published in 1861. One of his reasons for writing this book was to expose the cruel treatment and punishments meted out to seamen in the whaling fleet. $850.

Item 7 is another set of photographs, 24 taken mostly around Nome, Alaska, circa 1900. The photographs contain printed identifying captions. They show "Mining on the Beach," Nome from a distance with hundreds of prospectors' tents, sled dog teams, a Fourth of July celebration, J. F. Giese's hardware store occupying "the finest building in Nome," and the most important local businesses, Wyatt Earp's Dexter Saloon, Northern Saloon, and the Hunter Saloon ("the finest in Nome"). From Juneau there are five views, including a brewery housed in the first church. They knew how to get these tough men to attend church. $2,000.