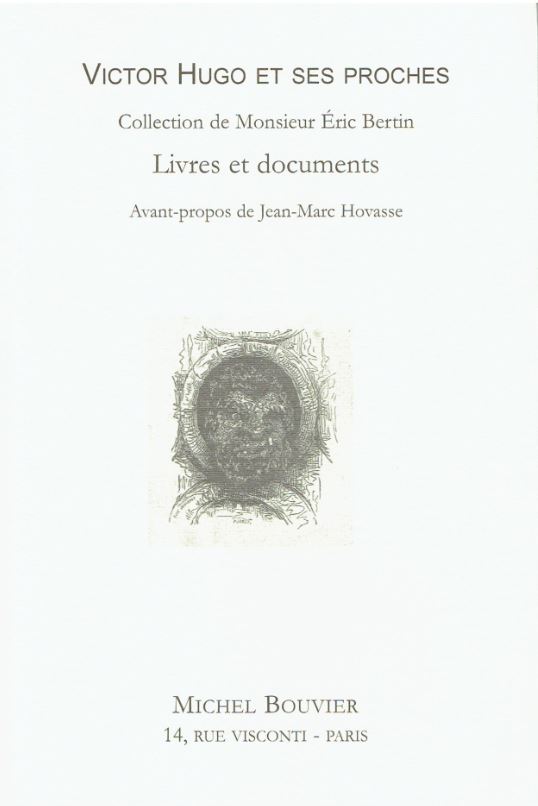 Victor Hugo and his relatives.

Parisian bookseller Michel Bouvier has issued a catalogue entitled Victor Hugo et Ses Proches Collection de Monsieur Éric Bertin Livres et Documents (Victor Hugo and His Relatives, Collection of Monsieur Éric Bertin, Books and Documents). Victor Hugo not only needs no introduction in his French homeland, but much of anywhere else either. Two of his books remain staples of American films and theater today, among the most popular even on Broadway, The Hunchback of Notre Dame, and Les Miserables. Of course, he wrote much more, and his works are notable for humanizing the plight of France's underclasses. Along with his books and poems, this catalogue contains many glimpses of his personal life, letters and documents reflecting an unusual private existence. This is an opportunity to obtain not just some of his rarer books, but a part of the man himself. Here are a few samples of the 240 items offered related to Victor Hugo.

We begin with the first published work of Victor Hugo. It is not one of his great works. It did not even carry his name. No one would have noticed if it had. Hugo was only 17 years old at the time. Item 3 is a dissertation by then almost 40-year-old François de Neufchâteau. The title is Examen de la Question de Savoir si Le Sage est l'Auteur de Gil Blas, ou s'il l'a Pris de l'Espagnol. Published in 1819 under Neufchateau's name, it is a consideration whether the novel, Gil Blas, written a century earlier, was actually the work of a Spanish writer, not Alain-René Lesage to whom it is attributed. Claims had been made by some Spaniards, and even Voltaire, to that effect. The knowledge of Spanish customs and such led some to believe it could not have been written by Lesage. Neufchateau was a poet, though more of a critic and primarily a government official. He would later publish an edition of Gil Blas using this essay as a preface. His argument is for Lesage's authorship of the novel. However, most of his dissertation was not written by Neufchateau but by his young protege. In it, Neufchateau disputes the Spanish theory. However, most of the research and writing was done by Hugo, who later would provide broad hints as to his authorship. However, he was not upset by Neufchateau's appropriation of his work as the latter was very helpful to young Hugo's career. Priced at €600 (euros, or approximately $675 in U.S. dollars).

This next piece is an early, eight-page poem from Victor Hugo that may be unexpected. It can be explained by the fact that Hugo was only 20 years old at the time and his political views had not yet matured. He was still more like his mother, a Catholic monarchist, than his father, who had served Napoleon. Indeed, this poem was an attack on Napoleon. The title is Buonaparte, Ode, an ode to Napoleon Bonaparte, but it is hardly complementary. Published in 1822, he describes the then former Emperor as a living plague. He also calls him a despot and usurper, and praises the restored Bourbon monarchy. He soon was awarded a stipend from the restored King. However, Hugo also displayed a certain grudging respect for Napoleon's achievements, and the following year wrote a poem to honor his Napoleonic father. Within the coming years, after experiencing some poverty himself, Hugo would become a champion of the poor against all types of despotic governments, and would look at the coming kings and despots who came to rule France with greater disdain than he had for Napoleon. This is a quite rare piece to find. Item 9. €2,400 (US $2,276).

Seven years later, Hugo would complete one of his more influential novels, a short one that reveals the developing social conscience of its author. Hugo was moved by witnessing the preparation for a public execution, or perhaps being upset was a better word. He went home and began writing Le Dernier Jour d'un condamné (the last day of a condemned). The book evidently moved others as this third edition was published just three weeks after the first in February of 1829. It describes the condemned man's thoughts, emotions, and life in prison on his last day on earth. It takes him to the guillotine where a plea for a pardon is ignored, and the crowd yells for the executioner to get on with it. Hugo's aim was the abolition of the death penalty, and his vivid description of the event is designed to stir similar sentiments among its readers. Hugo focuses on the barbaric penalty itself by not giving the convict a name nor even stating what was his crime. Neither mattered to Hugo, only the barbarity of state killing was important. Actually, Hugo's name as author is also omitted. Item 52. €4,000 (US $4,460).

If Hugo's previous works did not create a great stir in lands far from France, this next one would make him a name in places as far away as America. Few do not know this story even now, almost two centuries later. Item 68 is Notre-Dame de Paris (Our Lady of Paris), better known in English editions as the Hunchback of Notre Dame. This is a first edition, published in 1831, though labeled fourth edition. When the first edition was printed, the publisher listed parts of the run as being the first, second, third, and fourth edition to make it look like the book was selling faster than it was. In hindsight, we can see there was no need for this ruse. The French title reveals Hugo's interest in the preservation of very old architecture, which he thought was being destroyed, hence its focus on Notre Dame, the church. However, the Gothic story proved to be of more interest to readers than the Gothic architecture, hence the English focus on the Hunchback. €2,800 (US $3,120).

Next we have an accounting of expenses by "Toto and me" from July 1-24, 1835. "Toto" was Hugo's pet name by Juliette Drouet, or in keeping with the names, by "Juju." Victor married the love of his youth, Adele Foucher, in 1822, and they remained married until her death in 1868. Hugo had a roving eye, but his most lasting relationship, even longer than that to Foucher, was with Juliette Drouet. It began in 1833 and lasted until her death in 1883, two years before his. One should not be too judgmental of Hugo because Foucher had earlier entered into an ongoing affair herself with a friend of Hugo's, but their marriage nonetheless lasted, though not with the romance. Drouet, an actress, and Hugo fell in love at first sight and it lasted a lifetime. When Hugo went in exile in England for 20 years after the rise of Napoleon III, it was Drouet who went with him, always living nearby. She wrote him two letters a day, thousands of which still exist. This expense account of his was written by her shortly before the two went off on one of their many trips together. Item 115. £1,150 (US $1,281).

Hugo had five children, all with his wife, Adele Foucher, but there was one other he loved as a daughter. That was Claire Pradier. She was the daughter of Juliette Drouet. Drouet had many romances before meeting Hugo, but never married, not even to Hugo during the 15 years they outlived his wife. Claire's father, James Pradier, was a sculptor, 16 years her senior, who took her under his wing, and a little more. However, once Drouet hooked up with Hugo, she lived the rest of her life for him. Item 151 is a letter dated May 5, 1846. In it, Drouet sadly writes a friend of her daughter's serious illness. She died the following month at the age of 20. €650 (US $724).