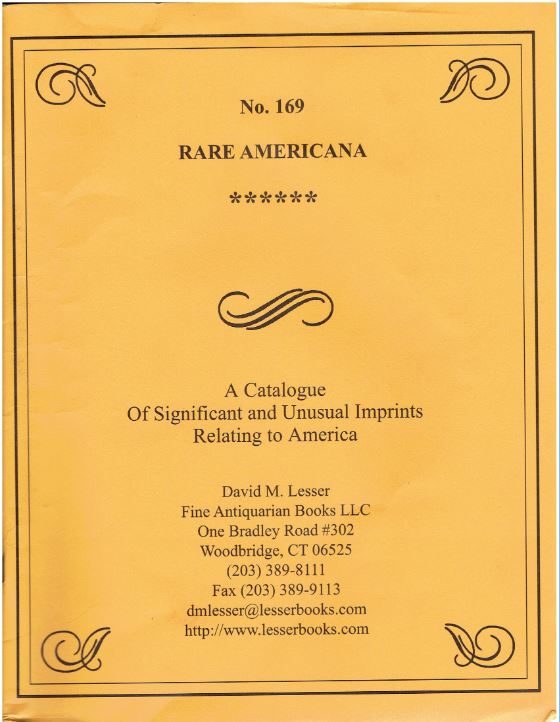 David M. Lesser Fine Antiquarian Books has issued their Catalogue 169 of Rare Americana. Primarily pamphlets, broadsides and various documents and manuscripts, there is something from the 17th through the 20th centuries. However, the vast majority are 18th and 19th century writings, with much concerning the building split over slavery and the resulting terrible war. Here are a few items from this new catalogue.

We begin with a legal tract, Speech of Clark Bell, Esq., to the Jury, in the Proceedings...upon the Inquiry as to the Sanity or Insanity of George Francis Train. Train may or may not have been insane, but he was certainly a character and eccentric. He had made a fortune in shipping and railroads, a founder of Union Pacific, which was paid handsomely for building part of the Transcontinental Railroad. He ran for President a few times but whatever votes he gathered were too few to be recorded. He took positions all over the map. He was pro-women's rights and anti-religion. In 1870, he took time off to travel around the world, completing his journey in 80 days. He is believed to be the inspiration of Jules Verne's book of that title. In 1872, presidential candidate Victoria Woodhull was charged under obscenity laws for publishing unambiguous accounts of the adultery charges against clergyman Henry Ward Beecher. Train came to her defense by publishing and mailing his own obscene newspaper. However, he cleverly chose racy passages from the Bible to quote in his obscene newspaper. Defender of public morals Anthony Comstock arrested and had him thrown in prison without bail, but the biblical source of the obscenity was a terrible dilemma for the court. To get around it, the court asked Train to plead not guilty by reason of insanity. Train refused. The Judge tried to get the jury to find him insane, only to have Train give a long-winded history of his life as part of his defense. A spellbinding speaker, he won over the jury which refused to find him insane. It all went away and Train continued for another 30 years of adventures, though most of his fortune was gone, eventually spending many days in Central Park, handing out dimes and refusing to speak to anyone but children. Item 14. Priced at $600.

Next we have the tale of a most unhappy marriage. Miss Barber was working as a clerk in Washington when some Indians came to town to pay a visit. One of them captured her heart. Actually, it wasn't quite that romantic. Life was boring as a clerk and Ms. Barber saw an opportunity to accomplish two things, experience some excitement and bring the Lord's Word to the natives. She married Squatting Bear. She returned to Dakota with her new husband only to find he already had four other wives. She wasn't a particular favorite. Life became a drudgery there too. While her husband hunted, she made baskets and such with other women, who were not noticeably accepting of her. The food was not to her taste, traveling on unsaddled horses painful. Mr. Bear could be abusive, and on top of all that, the Indians did not have much interest in her religious instruction. Finally, Mrs. Bear could take no more and attempted to escape. She was promptly caught, whereby her husband knocked her down, stomped on her, and sold her as a slave to a Cheyenne chief. She endured two more years of even worse suffering before finally escaping to rescue at a military fort. Fortunately, some good did come out of this. Like so many other Indian captives or visitors, she came back with lots of miraculous medical cures, about which others could learn by buying her book. The title is, The True Narrative of the Five Years' Suffering & Perilous Adventures, by Miss Barber, Wife of "Squatting Bear," a Celebrated Sioux Chief, published in 1873. Wright Howes succinctly wrote this one off, saying, "Probably as spurious as are the medical remedies contained." Item 8. $750

If you wanted to hold an anti-Mormon "Christian convention," where would you most not want to hold it? That is exactly where this one was held. Item 34 is Christian Progress in Utah, the Discussions of the Christian Convention Held in Salt Lake City, April 3rd, 4th and 5th, 1888. The "various Christian denominations" came to Utah "to take the lead in all moral reforms," and hoped to generate "the overthrow of certain great evils in this region." Among the topics were "the Mormon Perversion of the Bible," and "the Mormon Priesthood one of the Chief Obstacles to American and Christian Progress in Utah." Fortunately, they displayed "the fair and kindly spirit manifested by different speakers in dealing with the errors of the Mormon system." One suspects they were not much more warmly received by the natives than was Mrs. Barber-Bear. Item 34. $450.

There wasn't a lot of voluntary freeing of slaves in the pre-Civil War southern and border states, but some slave owners did see the injustice in the system and acted accordingly. Item 98 is a manumission document from Mildred Butler of Kentucky in 1828 freeing her male slave "Hannibal." Mildred Butler was the widow of Gen. Percival Pierce Butler, a Revolutionary War hero who served under Gen. Washington at Valley Forge, Lafayette at Yorktown. In this document, Mrs. Butler says she has "manumitted, set free, & forever discharge from all further servitude my Negro man slave Hannibal..." It continues with a physical description of Hannibal, necessary for identification purposes since, as a slave, he had no last name or identifying records. Mrs. Butler also posted a $500 bond to guarantee Hannibal would not require public assistance. Evidently, Mrs. Butler's decision was supported by her family and heirs as the document has also been signed by her son, Richard P. Butler. $1,250.

This was a hopeful sign following the Civil War, but sadly, it didn't last long. Rather than replaced by brotherhood, slavery was replaced by racism. But, during the early days of Reconstruction, there was hope. Item 128 is a Currier & Ives print captioned, The First Colored Senator and Representatives in the 41st and 42nd Congress of the United States, published in 1872. The seven dignified gentlemen portrayed were Senator Hiram Revels of Mississippi, Congressmen Robert De Large, Joseph Rainy, and R. Brown Elliot of South Carolina, Jefferson Long of Georgia, Joseph Walls of Florida, and Benjamin Turner of Alabama. There would not be many more African Americans representing the South for a very long time. $2,500.