"Oh, The Places We Will Go" with Zephyr Used & Rare Books 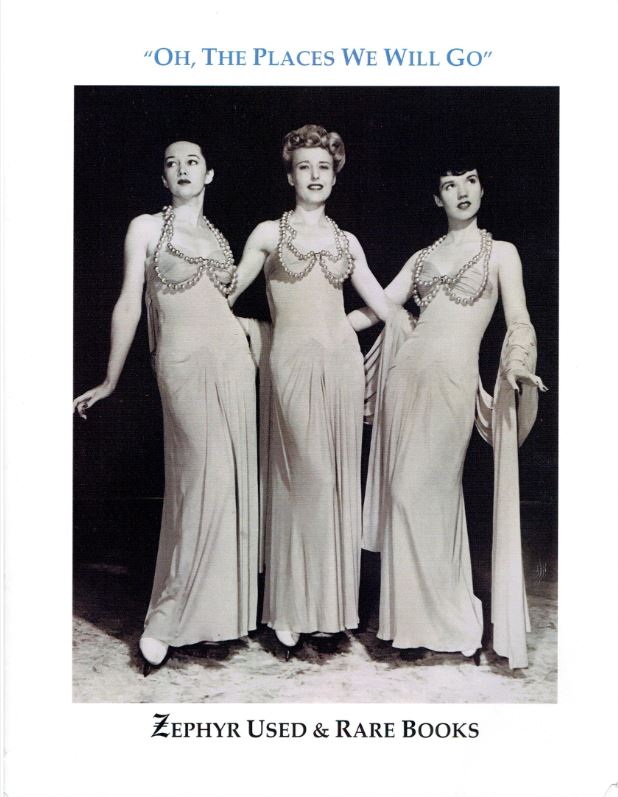 Oh The Places We Will Go.

Zephyr Used & Rare Books has published a catalogue titled "Oh, The Places We Will Go." This refers not just to physical places, in effect a travel catalogue, but to new technology, ideas, and such. This is a journey taken not just through books, but even more so by ephemeral items, including catalogues, manuscripts, photographs, maps, scrapbooks and the like. There is no shortage of fascinating material to be found, primarily American and 20th century. So, let's begin our ride.

We begin with an item that certainly went places, although they were all within the state of Alabama. The title is The Movable School Goes To The Negro Farmer, by Thomas Monroe Campbell. This was published in 1936, in the midst of the Depression. This was a tough time for most everyone, so it was particularly bad for those on the low end of the pole. The Tuskegee Institute was equipped to help poor black farmers who had nowhere else to turn, but many could not afford to make the trip. So, Tuskegee sent out a truck with a home agent and nurse to help out poor rural African American farmers. They would demonstrate both modern farming methods and provide advice on health and sanitation, often dealing with individuals' health problems. Originally designed by George Washington Carver, it promoted education and his ideals of self-sufficiency and self-improvement. This copy has been inscribed by Campbell. Item 2. Priced at $500.

If you want to go someplace, it will certainly be handy to have a map. I can think of worse places to visit than California and Nevada, so that will be our next destination. Item 42 is a Mileage Map of the Best Roads of California and Nevada Showing Paved Roads - Road Distances... As a caution, it may be a bit out date. It was published circa 1923. This is a Clason Map, Clason being one of the first companies to publish road maps, along with Rand-McNally. Unlike the latter, Clason did not survive the 1930s. By 1923, some states had begun to assign numbers for roads, but the federal highway numbering system was not initiated until 1926. The result is that interstate routes had names instead of numbers. These names include the famous Lincoln Highway, Dixie Highway, National Trails Route, Overland Highway, Old Spanish Trail, National Roosevelt Highway, and Bankhead Highway. You can see this quickly became confusing, leading to the assignment to route numbers. In those days, the federal government provided some financial aid to the states, but was not yet in the road building business. Private organizations, which did not actually build roads, would find the best interstate routes by combining existing state and local roads and giving them a name and road signs, so travelers could find their way. $150.

What would you like to get you there? How about a Locomobile! Founded in 1899, Locomobiles were once very popular cars. They were produced for three decades, succumbing in that watershed year, 1929. Item 29 is a color catalogue for the 1909 Locomobile. The catalogue is beautiful and so are the cars. The company labeled their automobiles "the best built cars in America." Based on their prices, one would hope so, but I don't know. After all, how many Locomobiles are still on the road? $300.

Here is another traveling show, but unlike the Tuskegee one, this is downright creepy. This is a book for The Alert America Convoys Sponsored by Valley Forge Foundation in Cooperation with Federal Civil Defense Administration... It was published in 1952, at the height of the Cold War and paranoia over nuclear war. The Alert America Convoys were traveling civil defense exhibitions. They would come to your town and tell you how to prepare for nuclear annihilation. Duck and cover. The exhibitions used shock value, including displaying the effects of atomic warfare, which somehow was supposed to help you survive the unsurvivable. It's the thought that counts. Item 75. $450.

Our next trip takes us to the future, although this future is now the past. Item 155 is Le Vingtieme Siecle. La Vie Electrique (The twentieth century, the electric life). The author was Albert Robida and this is a science fiction novel. Published in 1890, it is designed to predict the impact of electricity and technology on the world in 1952. Oh my, duck and cover. Based on Zephyr's description, it looks like Robida was amazingly prescient, predicting the atomic bomb and many other things that came to pass. Zephyr writes, "Robida spins a tale surrounding a world filled with videoconferencing, television, television news, records, tape recording devices, surveillance cameras, intercom systems, women's suffrage, weapons of mass destruction, and even the dangers of chemical and industrial pollution destroying the environment." Sounds like he was quite a prophet. $1,250.

What could be more satisfying than a salad? Lots of things, but Ida Bailey Allen claimed to find a way to be both satisfying and healthy in her book Satisfying Salads, the Perfect Health Food... published circa 1925. Ms. Allen wrote over 50 cookbooks and claimed to be the first person to host a cooking show on the radio. At its peak in the late 1920s, it was broadcast for two hours five days a week by CBS. She is also said to have been the first female host of a cooking show on television, though I have been unable to determine when or from where it was broadcast. This book provides menus and recipes for 365 fruit, frozen, and green salads. You got to eat steak for one day on leap year. Ms. Allen lived to be 88 so her salads must have been healthy after all. Item 93. $100.

Next we have a 1936 Disney comic book titled Mickey Mouse and Pluto the Pup. The cover shows a happy Mickey and Pluto playing. Don't be fooled. This one is heavy. It is based on the 1935 Disney film Pluto's Judgment Day. In it Pluto chases a kitten to which Mickey warns him he will have much to answer for on Judgment Day. C'mon, Mick. That is some heavy guilt to lay on a poor little puppy. I can only quote The Disney Wiki for the plot of this short cartoon: "When Mickey catches Pluto chasing a kitten, he angrily scolds and punishes his dog, who falls asleep by the fire and dreams that he is put on trial in Hell by a judge and jury of vindictive cats. He is found guilty of several crimes against cats, which involve the cats being scared or dying, which is surprisingly dark for a Disney cartoon. As he is about to be burned to death, he awakens with a newfound appreciation for the kitten after Mickey tells them to 'kiss and make up.'" Thanks, Walt. Item 85. $550.