Colonial and Revolutionary Americana from the George S. MacManus Company 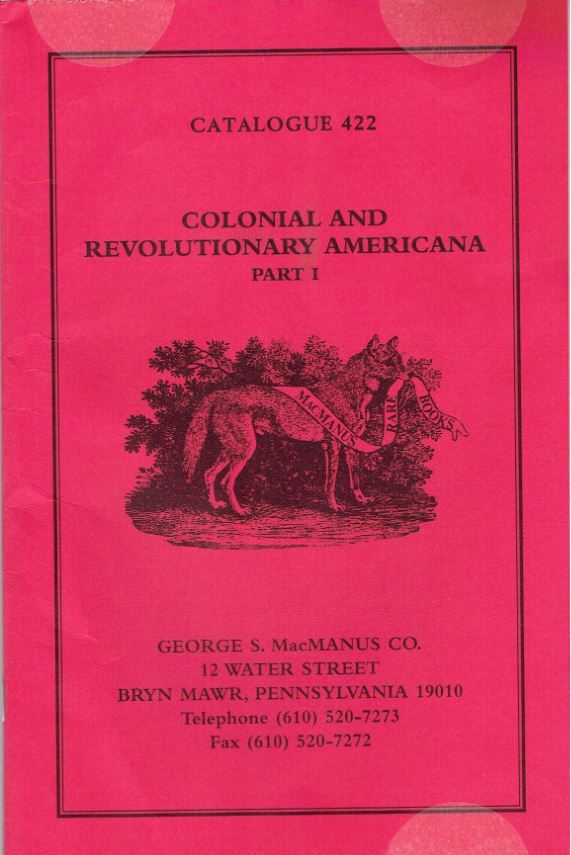 This is one of the earliest histories of Virginia, The History and Present State of Virginia, in Four Parts...By a Native and Inhabitant of the Place. According to Howes, this history of Virginia was preceded by only one. He writes, "After John Smith, the first account of this colony, the first one penned by a native and the best contemporary record of its aboriginal tribes and of the life of its earliest settlers." It is also a much more extensive account as the Virginia settlement of John Smith was but a tiny fraction of what it had become by the time this book was published in 1705. The native inhabitant who provided this account was Robert Beverley. Beverley was a farmer, historian, and political figure in Virginia. His brother was a Speaker of the House of Burgesses. Robert Beverley was an inhabitant of Smith's old stomping grounds, Jamestown, though it was a very different place by this time. His account describes all aspects of life in Virginia, including its produce, plantations, and history up to 1705. Item 62. Priced at $10,000.

Next we have another look at early America, an even more remote area: A Description of the English Province of Carolana. By the Spaniards call'd Florida, and the French, La Louisiane. As Also of the Great and Famous River Meschacebe, or Missisipi...Demonstrating the Right of the English to that Country, and the Unjust Manner of the French Usurping of It. That is not a misspelling of "Carolina." Carolana was situated to the west and south of Carolina, covering much of what is now the western Carolinas, Georgia, Florida, Alabama, Mississippi, and the old Louisiana Territory (on the west side of the Mississippi). The author was Daniel Coxe, the book being published in 1741. Coxe compiled his account from both the writings of others and the 14 years he spent on the land. In the preface, Coxe issued the first printed proposal to create a confederation of all the British colonies in North America. Coxe had a personal reason for wanting to establish British sovereignty over land also claimed by France. His father had obtained the rights to an early 17th century grant by King Charles of this enormous territory and Coxe wanted to secure its possession for his family. Though the French and Indian War would establish most of the territory as British, Coxe never did obtain its possession. Item 160. $11,000.

Victory has a hundred fathers, but defeat is an orphan. The Revolutionary War created many orphans, but not just on the battlefield. Several British commanders jockeyed with each other to pass the blame for their losses. One was General John Burgoyne, though he was not entirely unjustified in doing so. He led British forces in their defeat at the Battle of Saratoga in 1777. England sent its forces down from Canada in an attempt to wrest control of the Hudson River from the Americans. By doing so, they could split American forces in New England from those in the middle states and South. Divide and conquer. Unable to assist each other when needed, they figured the Americans would be easy pickings. Perhaps they would have been but the British never got to see. Burgoyne's forces were overwhelmed by the Americans under Generals Horatio Gates and Benedict Arnold. However, this was not really Burgoyne's fault as his army was far outnumbered by the Americans. He had requested double the number of troops he received, leaving him seriously vulnerable. The victory was crucial to the Americans, not only because it foiled the British plans, or because of the enormous morale boost it provided, but because it led other countries reluctant to assist the patriots for fear of a rout to throw their support the Americans' way. Item 98 is Gen. Burgoyne's polemic, A State of the Expedition from Canada, as Laid Out before the House of Commons, by Lieutenant-General Burgoyne, and Verified by Evidence... This is the first edition, published in 1780. $9,500. A second edition, published the same year, is also available. Item 97. $4,000.

Speaking of that hero of Saratoga, Benedict Arnold, item 30 is a 13" x 9" mezzotint of him. It was created in London on March 26, 1776, before his success at Saratoga. It displays him well-dressed in a neat uniform at the Battle of Quebec. Americans under General Montgomery sought to put the British on the defensive early on by capturing Quebec, hoping also to attract French Canadians to their cause. It didn't work out that way. The Americans were routed, Arnold injured, and the forces had to retreat home in bad shape. Despite his bravery during the early part of the war, few Americans remember Arnold fondly. Perhaps one of our British readers would enjoy displaying his portrait more than Americans. Arnold was also pompous and self-centered and ultimately, he sold out his country for money. He remains America's best known traitor all these years later. He managed to escape to the English side ahead of the hangman, but even in England he was never well received. $2,000.

Item 128 is Dropped Stitches in History, by Louis C. Chisholm, privately printed in 1912. Chisholm, 91-years-old by this time, was the grandson of John Sevier, the first Governor of Tennessee, and this is a biography of his grandfather (being Sevier's grandchild was probably not all that unusual in Tennessee since Sevier had 18 children). Sevier was an Indian fighter in the mountains of what was still part of North Carolina at the time of the Revolution, and he killed many and appropriated much of their land. For a brief period, North Carolina ceded their western territory to the new federal government in return for paying its debts. Settlers took advantage of the opportunity to set up their own government, which they named the state of Franklin. Sevier was its governor. Ben thanked them but did not become involved. North Carolina later changed its mind, and for a while there were rival governments, but Franklin then dissipated. However, the federal government would again recognize the separation from North Carolina and in 1796, Tennessee officially became the 16th state. Sevier became the state's first governor serving three two-year terms, was term limited out of office for two years, and then was again elected to three terms as Governor. By this time, Sevier had become a rival of Andrew Jackson. Jackson challenged him to a duel after the latter insulted him, to which Sevier accepted. The plan fell through when Sevier's wagon broke down on the way. Sevier later became a congressman from Tennessee, dying in office in 1815. $250.