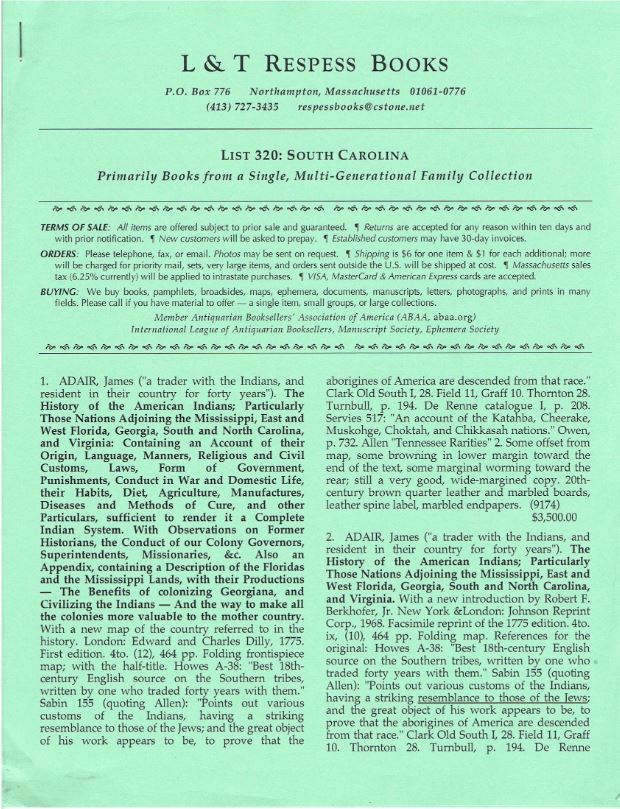 L & T Respess Books has published a catalogue entitled South Carolina. This can reasonably be thought of as a companion to their recent catalogue on North Carolina. The books and documents in here are either from South Carolina, cover events about or people from South Carolina, or were created by South Carolinians. Much of the state's history is uncovered in the material found herein. South Carolina developed a bit of notoriety as the leader of the secession movement, first unsuccessfully during the Nullification Crisis, later succeeding in getting the rest of the South to follow it into the Civil War. However, there is much more to the state's history and those events only relate to a tiny portion of it. Many South Carolinians played important roles in the nation's successful secession from England. Here are a few samples from its storied past.

We begin with a classic early account of the southern Indians by an Irishman who traded with them for 40 years (maybe a little less - his claim). James Adair traveled to the southland in 1735 as a fur trader and stayed for up to four decades. Not surprisingly, he became well acquainted with their ways, their customs, diet, language, agriculture, tools, religion, medicine and disease, law and punishment, conduct of war, domestic life, and more. Most of the time he traded with the Cherokee, Catawba, and Chickasaw tribes, though he also visited others. On returning home, he published this book in 1775: The History of the American Indians; Particularly those Nations adjoining the Mississippi, East and West Florida, Georgia, South and North Carolina and Virginia. Sabin calls this "the best 18th-century English source on the Southern tribes, written by one who traded forty years with them." Adair also uses his book to promote his theory of the origin of the Indians, no longer taken seriously today but once shared by many before advancements in geologic and archaeologic evidence. He believed they had descended from the Lost Tribes of Israel and he presents 23 similarities between the Indians and the Jews to bolster his claim. Item 1. $3,500.

South Carolina almost seceded from the Union long before the Civil War. This was the Nullification Crisis. South Carolina strongly opposed tariffs that had been adopted by the federal government. Those were protectionist tariffs that favored northern business interests, protecting them from foreign competition. However, the South was not industrialized. It depended on agriculture, notably cotton, which was not threatened by foreign competition. All tariffs did for them was to raise the cost of consumer goods imported from overseas, plus invite retaliatory tariffs which would make their agricultural products less competitive overseas (why does all of this sound so familiar?). Lacking the votes in Congress to overturn the tariffs South Carolina declared that it had the right to nullify any federal laws of which it did not approve. South Carolina further said that it would secede from the Union if the federal government used force to enforce those tariffs in their state. President Jackson responded firmly, saying he would send in troops if South Carolina seceded. Just as that state would approach the other southern states to join it in seceding just before the Civil War, it made such an appeal in 1832. It fell flat. No other southern states joined the effort, leaving South Carolina alone and outgunned. When President Jackson agreed to changes making the tariffs less onerous, South Carolina quickly fell in line. Item 93 is The Reports and Ordinances of the Convention of the People of South Carolina, Adopted at Its Session in March, 1833. In this convention, the representatives of South Carolina voted to repeal the Nullification ordinance it had passed the previous November. $500.

That seemed to end the the threat of conflict for South Carolina, but just in case, it was useful to publish this book a year later, in 1834. Item 83 is A System of Tactics, or Rules for the Exercise and Manoeuvres of the Cavalry of the State of South-Carolina. Printed under the authority of the state legislature, this is a rare manual for use by the state's military. $2,000.

Here is a letter that is wrong in so many ways. It was written on October 4, 1850, by Dixon Evans to his brother John. Evans writes that he has shot and killed a slave. He claims that he fired from his window 30 yards away at a slave breaking into a neighbor's dairy with a pistol loaded with only one bullet. He says, "I did not contemplate shooting the negro, but shot to frighten him." This must have been the ultimate case of bad aim, striking the slave in the neck and killing him. Evans continues that "Every body says...I served him right and so does my conscience." However, while his conscience felt fine, Evans was nonetheless very concerned. The slave's master, Nathan Evans (we don't know if they are related) is about to sue him. Unfortunately, if you think it is because Nathan Evans was unhappy about the wrong done to the slave, you are too sentimental. As Dixon Evans explains, "His master is in great choler and indignation and will sue me for some 4 or 5 hundred dollars unless I will give him $400, in which case he 'will settle friendly.'" It's just business. Dixon is upset because, he explains, "This is twice as much as his servant was worth." He goes on about his having performed a community service and how everyone is praising him, while noting, "I made the most extraordinary shot on record" (especially so since it was supposedly unintentional). Anyway, the gist of all this is that Dixon Evans will not be able to go to California now until next March because of the coming trial. Item 101. $1,250.

Here is a letter from a South Carolinian that is not offensive, indeed, is even touching. It was sent by John B. Bull to his stepson, Dr. James Morrow. It is dated January 18, 1853. Morrow was participating in Commodore Matthew Perry's famous expedition that led to the opening of trade with Japan. Bull first sends Morrow his "Mother's Tender Love" and speaks of her health. He then continues, "...we unitedly entreat you to be very cautious & circumspect in all your movements." Item 100. $25.

This is an interesting book, The Life, Adventures, and Opinions of Col. George Hanger. Written by Himself. Actually, it wasn't. It was ghost written by William Combe. Added to it is Advice to the Lovely Cyprians, and to the Fair Sex in General... and...a History of King's Bench Prison, Written by the Author during his Custody under the Marshal of that Prison. Hanger, a highly respected officer of the British who served their side during the American Revolution, never spent time in King's Bench Prison. Combe did, for nonpayment of debts. Combe wrote several satirical pieces, so just what is going on with this book is not clear to me. However, one thing is notable here, a prophecy made by the author, whoever he was. At one point he says, "One of these days the Northern and Southern powers will fight as vigorously against each other as the both have united to do against the British..." This book was published in 1801. Item 114. $300.