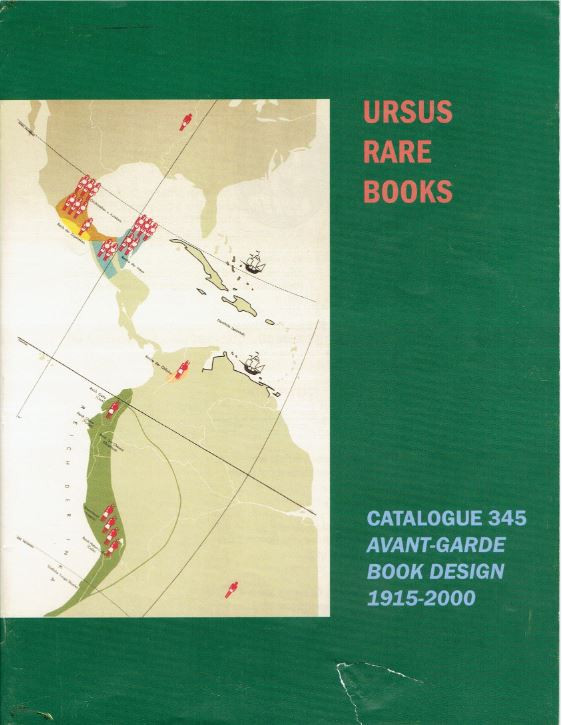 Ursus Rare Books has issued a catalogue of Avant-Garde Book Design 1915-2000. These are cutting edge designs, some ahead of their time, others, perhaps, short trips down a blind alley. Beauty is in the eye of the beholder. Terms like surrealism, futurist, cubism, modern, or just what-the-heck-is-this can be applied. Avante-grade book design is often tied together with avant-garde art, prose, or poetry. However, the majority of the pieces in this catalogue are from the years between the wars and into the Second World War. Most come from countries that were evolving into totalitarian regimes that were not the most likely places for creativity, Germany, Italy, Japan, the Soviet Union. The first decade after the "Great War" was more conducive to general creativity. The second decade was not, so what we see is creative book design coupled with mundane, even horribly reactionary content. Mussolini came to power in the 1920s, Hitler in the early 1930s, Japan began its expansionism invading China in 1931, in 1932, Stalin clamped down on art and literature that did not support his control of the Soviet Union. Attempts to be creative under these circumstances are fascinating to see today. Here are a few items from this collection.

Floris Jespers was a Belgian avante-garde painter associated with various styles within that category at different times during his career. Impressionist, expressionist, cubist are among the schools used to describe his work. He changed with the times. Item 5, however, is a work unlike any other in his output. It is a children's book. Published in 1923, it is the only such book Jespers created. The title, appropriately, is Kinderlust. It combines his linoleum cuts with the verses of Jan Peeters. The illustrations feature bright primary colors with geometric designs. Item 5. $8,500.

Next we have a large collection of very small Japanese art from between the wars. These could light a fire. Item 12 is an album of matchbox covers, 950 of them mounted on 59 leaves. Many show the influence of Art Deco styling. It seems unlikely that many of these survived, making this a collection virtually impossible to duplicate. $2,500.

Item 34 consists of two copies of Das Geld Schreibt, published in 1930. These are a German translation of Upton's Sinclair's 1927 novel Money Writes. The difference is in the dust jacket cover art by John Heartfield. Heartfield, born Helmut Herzfeld, was a German artist of left-leaning political views who used his art to graphically display his opinions. The SS came for him in 1933, but Heartfield was able to escape his home and make his way over the mountains to Czechoslovakia. In 1938, he again was forced to escape, this time to Britain, as Germany was preparing to invade Czechoslovakia. Heartfield was noted for his photomontages and his book dust jackets. The dust jackets on these two copies show the family of Emil Ludwig. Ludwig was a German author noted particularly for his biographies. Of Jewish extraction, Ludwig too would have to leave Germany, becoming a Swiss citizen in 1932 and moving to the United States in 1940. Ludwig sued the book's publisher over the use of his family photograph and won. The result is, while the first copy has the uncensored dust jacket, the second one has the censored version. In this one, the faces of the three members of the Ludwig family have been blotted out with solid colored circles. Perhaps to be extra cautious, the publisher also blotted out the head of the family dog. $1,500.

Item 51 also contains two copies, in this case, a first edition (1933) and a second edition (1936) of Una Favola Vera by F. Hardouin di Belmonte. That title translates to "a true fairy tale," and it truly is a fairy tale. This is another children's book, but its purpose was indoctrination, not entertainment. It is an aggrandized biography of Il Duce, Italian Fascist leader Benito Mussolini. However, while textual content leaves much to be desired, the color illustrations and book design are worthy of something better. These copies were part of the personal collection of Sandro Giuliani. Giuliani was an editor of Il Popolo d'Italia (the people of Italy), a newspaper founded by Mussolini in 1914, from its founding until 1936. The cover is inscribed by Giuliani to his two-year-old son. Mussolini was captured with his mistress and other Fascists trying to escape to Switzerland at the end of the war. Their convoy was intercepted by Italian Communist partisans and Mussolini was summarily executed on April 29, 1945. The following day, Giuliani was taken from his home and also executed. $3,750.

Item 60 is more pre-World War II propaganda. It is URSS en Construction, published in 1937. This is a quadruple issue of this Soviet periodical, here celebrating the twentieth anniversary of the Russian Revolution. This is the version in French and it features an oversized fold-out poster of Joseph Stalin. $4,750.

This is one of those spectacular productions by photographer Ed Ruscha. This one is entitled Every Building on the Sunset Strip. That is exactly what it displays. They are all here - apartments, gas stations, motels, parking lots, everything on the mile and one-half long strip. It is presented in a 27-foot long accordion fold-out. One side of the "strip" runs along the top of the page, the other on the bottom. This is the second version of the first edition, without the two-inch folded flap behind the last page, dated 1966. It has both an inscription and a second signature by Ruscha. Item 97. $4,750.