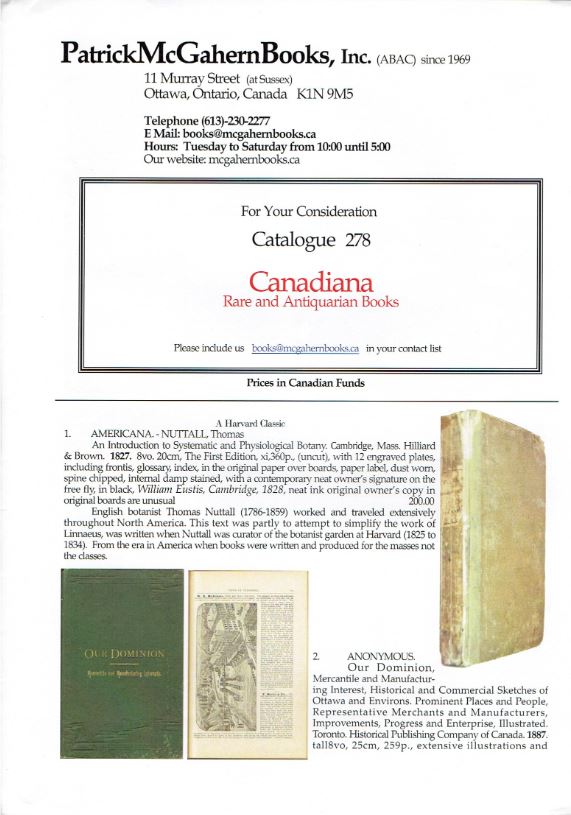 Patrick McGahern Books has released a new catalogue of Canadiana Rare and Antiquarian Books. This is their Catalogue 278, and while everything at least touches on Canada, there are some items that cover topics related to their neighbor to the south as well. It's hard to avoid some intermingling when you have a 5,500-mile border, without walls, no less. These are a few of the items you will find in this latest selection.

We start with the first guide to lands available in the West from the Canadian Pacific Railway. The title is Official Guide Book to the Canadian Pacific Railway Lands Situated in Manitoba and Northwest Territories (Saskatchewan was still part of the Northwest Territories then). The railway was incorporated in 1881, and completed its route in 1885. This guide is from 1883, as they were making lands available as they built sections of the railroad, undoubtedly to help finance the project. It contains 25 maps of town sites and five diagrams. McGahern notes that they have located an 1884 edition in the Library and Archives of Canada, but no other copies of this first edition. Among the towns where you can be one of the first to buy land are Moose Jaw, Broadview, and Moosomin too (but no running back to Saskatoon). Item 15. Priced at CA $4,500 (Canadian dollars, or approximately $3,427 in U.S. dollars).

It was at one time the largest railroad in terms of mileage in the world though never a profitable venture. The Grand Trunk Railway was formed in 1852, setting up shop in the populous eastern provinces of Canada. It also served northern New England and then some of the midwestern states of the U.S. It carried a heavy amount of traffic to Chicago, using its route through southern Ontario. By the turn of the century, it expanded all the way to the Pacific, using a more northern route than did the Canadian Pacific. There were fewer people and cargo in the more northern part of the Canadian West, making this route a particularly bad financial proposition. Their problems were exacerbated by the company's President taking an ill-timed voyage on the Titanic in 1912. By 1919, the railroad was bankrupt. Item 10 is Correspondence Regarding Grand Trunk Railway Company Acquisition and Memoranda Respecting The Same. It was printed by order of Parliament in 1919. This describes the government's takeover of the bankrupt railroad, along with providing a history of the Grand Trunk, its finances and legal matters. The takeover resulted in the formation of the Canadian National Railway. CA $150 (US $114).

Next we have The Love Poems of Irving Layton. Layton knew of what he spoke, having been married four times, along with an unmarried live-in relationship that lasted longer than any of his marriages. Born in Romania, Layton emigrated to Canada with his family as a young child and remained there the rest of his life. Along the way in his 93 years Layton was everything from a Fuller Brush salesman to university professor and TV personality. Mostly, he was a poet. He rebelled against traditional Canadian standards, his work admired by people such as Ginsberg and Dylan. He was a close friend of fellow Canadian Leonard Cohen. This book is #3 of a limited edition of 30 copies, published in 1978. It also contains five original mounted lithographs by Graham Coughtry. It is signed by both Layton and Coughtry. Additionally, Layton has handwritten a poem on the half title, "I sang of thighs / I sang of breasts / I sang of shoulders..." McGahern doesn't tell us what else he sang of, or maybe Layton doesn't. His poetry was known at times to include erotic references. Item 13. $2,000 (US $1,523).

Here is a very interesting map of North America, the way it used to be. The title is America Septentrionalis, from Dutch mapmakers Henricus Hondius and Johannes Jansson. This is a second issue published in 1641, five years after the first. It is the rare one with text on the verso. While not the first to make this error, by coming from the famed Dutch mapmakers, this is the map that established for a century the myth that California was an island. This arose from a misconception in the account by Friar Ascension from the coastal survey of Sebastian Vizcaino. He had traveled up the coast in 1602, and gave names to some locations on this map still in use today. There is "S. Diego," San Diego also being the name Vizcaino's ship, "Canal de S. Barbara," the island "I.S. Cathalina," "C. Mendocino," just south of there "Sir Francisco Draco." Perhaps that is San Francisco, though a "S. Francisco" appears on the continental coast to the east of California island. It is right near the mouth of the "Rio del Norte," now known as the Rio Grande, which actually does not flow into the Gulf of California. If it did, with California located to its west, Arizona would be a very fertile place. The river flows from a large inland lake, probably imaginary as the closest lake to it is the Great Salt Lake, which does not flow anywhere. Closer to where the Rio Grande actually is the map shows a river "la Madalena." Rather than a Mississippi River, there is a bay on the Gulf of Mexico into which six separate, smaller rivers flow. Florida is called "Tegesta Provincia," for the Tequesta tribe which inhabited southern Florida at the time. New England is properly named, but south of it is New Belgium. There is but one Great Lake, the Lake of the Iroquois. To its east, appropriately, is "Lac de Champlain." Hudson Bay and James Bay are there, though a bit west of where they should be, but also "The Great Bay of God's deliverance." God has not yet delivered this bay. Most of the interior of the continent is blank, other than for some pictures of roaming animals, horses, rabbits, deer or elk. The oceans contain ships and sea monsters. The Pacific coast north of California is completely blank, or covered with the legend, this area being completely unknown. Item 26. CA $5,000 (US $3,824).

Here is a man who began to fill in some of that missing interior of North America. Father Louis Hennepin traveled with La Salle to North America in 1678. La Salle traveled down the St. Lawrence and Niagara Rivers, eventually through the Great Lakes and overland, to reach the Mississippi River. Hennepin was with La Salle as he established Fort Crevecoeur, which the Indians called Checagou, and Americans now call Chicago. While La Salle returned to France for more funds, Hennepin traveled to the Mississippi and then upriver to places not seen by Europeans before. He was captured by Indians, but ransomed free. He proceeded to St. Anthony Falls, which he named, and as far as someplace near today's Minneapolis. Father Hennepin spent 11 years in North America and his accounts of various interior locations were the first and extremely important to understanding what the territory was like at the earliest possible date. Unfortunately, Hennepin is known for plagiarism and exaggeration as well. He recounts a trip south on the Mississippi all the way to its mouth he never took. He cribbed it from La Salle. His claimed size of Niagara Falls exaggerates its actual height. But, despite its flaws, his book gives us much detail about the land and its natives we otherwise would not have. Father Hennepin's book, the first edition in French, is titled Nouvelle decouverte d'un tres grand pays situe dans l'Amerique, entre le Nouveau Mexique et la Mer Glaciale (new discovery of a great land in America between New Mexico and the glacial [Arctic] sea). Item 22. CA $22,500 (US $17,201).