Law and Related Fields 15th-20th Centuries from the Lawbook Exchange 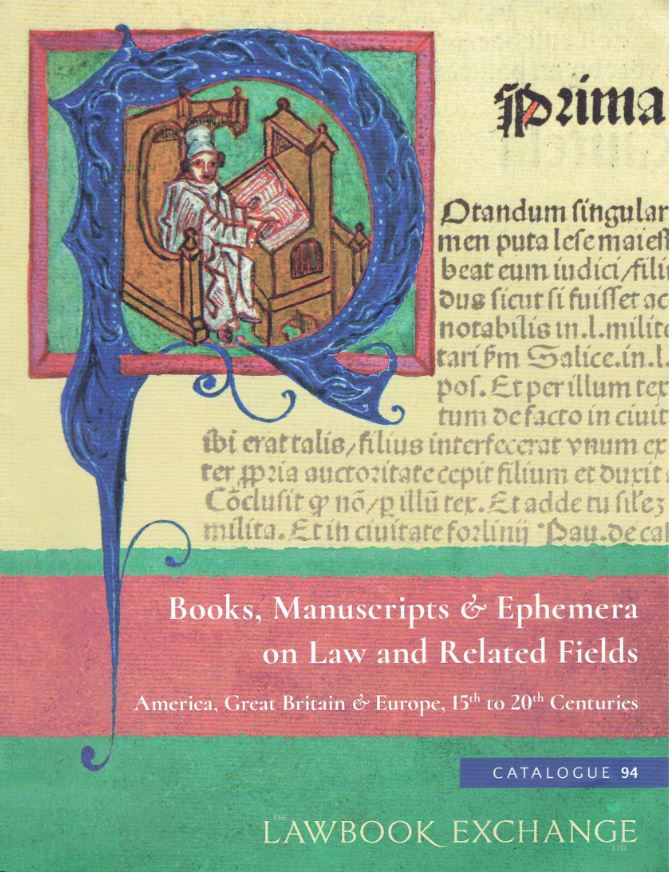 The Lawbook Exchange has published a new catalogue with the lengthy title Books, Manuscripts and Ephemera on Law and Related Fields, America, Great Britain and Europe, 15th to 20th Centuries. Or, there is the short title, Catalogue 94. There is a wide range of law-related material here. The earliest, incunable publications are primarily focused on ecclesiastical law. Moving forward, we find early treatises on secular law, various guides to what it is and how it is practiced. Going on to the 19th century, we find lots of crime-related publications, accounts of trials and, at times, terrible crimes. It is fascinating regardless of whether you have a legal background because it's more about us and how we dealt with crime rather than legal practice. These are a few samples of the various items to be found in this new collection.

We will soon get to items that don't require a legal background to find interesting, but will start with what is the most important book concerning English (including American) law. The title is Commentaries on the Laws of England by William Blackstone. However, everyone knows it simply as Blackstone's Commentaries. It was first published in England in 1765. Item 7 is the four-volume set of the first American edition, published 1771-1772. It was a reprint of the 1770 fourth edition. Naturally, in 1771, American law was virtually the same as English law. After all, America was still a part of England. However, Blackstone's Commentaries remained the premier American law book for another century. The English common law, that body of legal case law that set precedents for future decisions, was also American common law, and it had developed for centuries by this time. The list of subscribers included John Adams, John Jay, and 16 signers of the Declaration of Independence. It's continued use by lawyers in America resulted from the fact that so many were self-taught and this was their primary resource. So, years later, Abraham Lincoln learned the law from this book. Priced at $12,500.

This is a sensational story about a Belgian priest whose bible must have been missing the page containing the Sixth Commandment, the one that says "thou shalt not kill." It's the curse of defective copies. The title is La Vie de Jacques Pierlot, Pretre & Marguillier de la Paroisse de Vervier, Ville de la Principauté de Liege; Avec tous les Détails de son Crime, De sa Degradation, & De son Supplice. That briefly translates to the life of Jacques Pierlot, Priest in Vervier, with details of his crime, degradation, and torture. The not-so-Good Father had a gambling problem, evidently getting himself in debt as a result. One can debate whether gambling is a sin, it not being so stated in the bible. However, what Pere Pierlot did next was unquestionably a sin. He murdered his creditor, along with other members of his household. He was brought before a church tribunal which ordered his "degradation," that is, removal from his clerical office, carried out in public. He could only wish that the worst he faced was church authorities. He was then brought before a municipal tribunal which ordered he be tortured and strangled. One imagines he next faced a third judgment, by God, but that part is not covered in this book. The plates herein depict both his degradation and his less pleasant secular punishment. The book was published in 1786, not surprisingly, the year Pierlot died, and is something of an expression of the anti-clericalism of the Enlightenment in France in the days leading up to the French Revolution. Item 76. $1,850.

Next is an almost 200-year-old broadside concerning a political battle important in America at the time, though the principal has mostly been forgotten. The man was John W. Taylor, from Saratoga County, New York, who served two nonconsecutive terms as Speaker of the House of Representatives. He served with the giants of Congress, Webster, Clay, Calhoun, and reached the highest position in the House, but few know him today. He managed to make many enemies, though not a controversial personality. However, he was a strong opponent of slavery in the time before North and South became so widely divided and that made him unpopular with southerners. His later association with John Quincy Adams and Henry Clay would become an issue with those who supported Crawford and Jackson in 1824, and by 1828, Andrew Jackson in particular. That included New York's rising star in politics, Martin Van Buren. First elected in 1812, Taylor was elected ten times before being defeated by New York opponents in 1832. His terms as Speaker ran from 1820-1821, and 1825-1827. The first encompassed the time of the Missouri Compromise. Each time, he succeeded Henry Clay, and each time, he was defeated for reelection. This broadside from 1821 is headed Villany [sic] Detected, and it is a defense of Taylor against charges by his enemies. It goes on, "See the four means to which the unprincipled opponents of JOHN. W. TAYLOR resort to destroy him... Who can witness the composure, this base, underhanded and abominable conspiracy against your tried and faithful representative? Read! Read!" What happened is that one James Kinyon had hired the lawyer-representative to to help him obtain a military bounty. Apparently, Kinyon was satisfied, but later convinced by one of Taylor's enemies that he was overcharged and made such a claim. In this broadside, Judge James Ford, who had recommended Taylor, says the fee was fair and Kinyon himself explains how he was misled into making the claim. Item 14. $1,250.

There are worse things that can happen to a congressman than losing an election. Congressman Jonathan Cilley may not be well-remembered today, but there was a time in 1838 when his name was on the lips of every American. Cilley was first elected to the Maine legislature in 1830, his service there culminating with a term as Speaker of the Maine House from 1835-36. He then ran, successfully, for the U.S. House of Representatives in 1836. He was a Democrat, associated with Andrew Jackson and Martin Van Buren's policies. One of those policies was Jackson's decision not to recharter the Second Bank of the United States. In a debate in Congress, Cilley implied that a pro-Whig New York newspaper editor, whom he did not name but everyone interpreted to be James Watson Webb, had changed his position from anti to pro the bank after receiving a $52,000 bribe. Webb gave his friend, Congressman William J. Graves of Kentucky, a letter to Cilley challenging the latter to a duel. Cilley refused to accept it. Graves repeatedly asked Cilley if this meant he did not consider Webb a gentleman, to which he refused to answer. For whatever reason, Graves took this to be a personal affront and challenged Cilley to a duel. Graves was an expert marksman with a pistol, so Cilley chose rifles. Graves still had the advantage. At 90 feet the two men fired. Both missed. Their seconds tried to talk them out of further shots, but to no avail. They fired a second time and missed again. Once more, attempts were made to find a compromise statement to end the duel but were unsuccessful. Now, the two men moved closer together, fired third shots, and this time, the ironically named Graves hit Cilley in an artery. Within two minutes, Cilley had bled to death. Item 68 is an archive of 22 legal documents from 1824-1842 pertaining to Cilley and his estate. Others are concerned with his business activities, some of which are signed. $750.

Here is a set that will appeal more to collectors of miniature books than of legal texts. After all, who can actually read miniature books? That task will be even more challenging if you don't read Italian. Item 56 is a five-volume set of Italian legal codes from 1901-1903. Each book is 2 3/4" x 1 3/4" in size. The Lawbook Exchange describes it as a "curious set," which makes sense since it is hard to discern its purpose. $950.