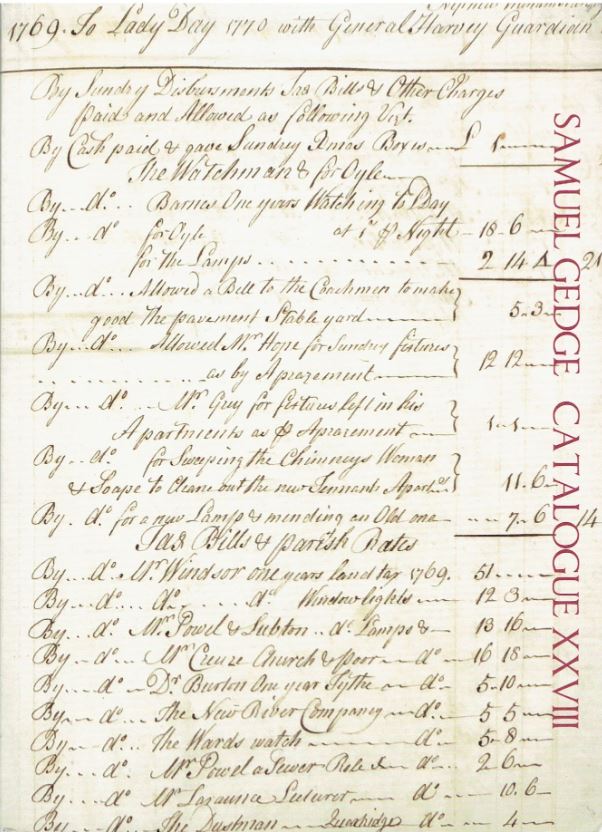 Samuel Gedge Ltd. has published their Catalogue XXVIII. Typical of a Gedge catalogue, it is filled with unusual items, most several centuries old. Few are book length. There are more documents, both printed and manuscript, including personal letters, diaries, business ledgers, posters, newspapers, sketches, and even a few non-paper ephemeral items. These are always fascinating catalogues filled with things you would not expect to still exist all these years later. Here are a few examples.

We begin with a document attesting to a prisoner exchange, one British prisoner for one Spanish one. It is actually a private deal. The Spanish prisoner was Don Juan de Villacreces. He had been captured by English privateer William Keynell, who was holding him as a prisoner in London. Keynell was not looking to hold onto his prisoner. Rather, he was seeking ransom. However, having had his valuables seized, de Villacreces was unable to pay the ransom. So, Keynell made a deal with his prisoner. He agreed to free de Villacreces on the condition the latter arranged for the freedom of his brother-in-law, William Hervey, being held on the island of Madeira. Keynell was not going to give de Villacreces his freedom on the honor system. A second Spanish prisoner, Domingo de Valdes, who had paid his ransom, was required to stay in London until de Villacreces freed Hervey. This document was signed in 1591, and de Villacreces evidently kept his part of the bargain as Hervey was involved in the British capture of Cadiz in 1596. Item 7. Priced at £7,500 (British pounds, or approximately $9,478 in U.S. dollars).

Next we have a papal bull from 1631, issued by Pope Urban VIII. The title is S.D.N.D. Urbani divina providencia papae VIII. Suppressio praetensae Congregationis Jesuitissarum. It is a suppression of a women's Catholic organization modeled on the Jesuits. It was founded by Mary Ward, an English Catholic woman who joined a convent in Flanders to avoid persecution in her homeland. However, she tired of the cloistered life and believed she could better serve her faith in a more active role. She was obviously a magnetic figure as she was able to set up schools and organizations for women around Europe. Her activities drew both praise and condemnation within the church. The good works were appreciated, but in those days, the male dominated church believed women should stay behind their convent walls and leave the rest to the menfolk. Urban showed Mary her place, and since it was no longer a convent, he chose prison. However, she was not held there long, and while her role for the remainder of her life was greatly diminished, she was able to carry on her mission to some degree. Eventually, the church came around and Ward was declared "venerable" by Pope Benedict XVI in 2009, the first step toward possible canonization. Item 85. £950 (US $1,196).

Item 46 is a state bond, issued in 1833, headed United States of America. State of Mississippi. Agreement and coupons relating to the payment of interest in London on the Mississippi State Bond... Payment was to be made of 6% interest per year, two semi-annual payments of $30 on this bond with a face value of $1,000. Payments were to be made in either London or New York, the London location as Mississippi found Europe a better place to peddle its bonds. It sounded like a good deal but it wasn't. Interest payments were made until 1841 when the state defaulted on them. The bonds remained in limbo until 1853 when the people of Mississippi made the easy call. In a referendum, they voted to repudiate the bonds. They even added a clause to the state constitution forbidding payment of interest on the bonds. No more payments would ever be made again. This case came before the Mississippi Supreme Court in 1993, over 150 years after the default. The court ruled that since the state constitution only forbade paying interest, the statute of limitations had long ago expired on collecting the the borrowed money. Again no luck for the bondholders. But, there is one saving grace for those who have been holding onto these bonds for 150 years. They are now worth at least a decent amount of money as collectors' items. Item 46. £350 (US $440).

If you had been alive the week of January 4, 1830, and living in London, you would have had a chance to see "an entirely new serio-comic Indian burletta spectacle" at the Theatre Royal Adelphi. Alas you were not, so you will probably never have such an opportunity. But, you have a chance to own the playbill for it. This huge playbill is elephant folio in size, most appropriate for the Elephant of Siam and the Fire Fiend! The Elephant of Siam was indeed a live elephant, and while that would not be quite that spectacular today, we all having seen lots of circus and zoo elephants, they were still an unusual and amazing sight to people in 1830. This one was named Mademoiselle D'Jeck and she had first appeared in Paris the previous year (Gedge notes she passed on in 1837). Still, there were many more performers including Siamese youth dancers, a pageant, a mystic cave fiend, throne of fire, and so on, but the elephant was the star of the show. Item 80. £2,500 (US $3,147).

Item 12 is a will, and a most unusual one at that. Gedge notes that "This will seems to have been a literary curiosity even in the seventeenth century." It was written in 1666 in Canterbury either by or on behalf of one Thomas Moore. What is unusual is that the will is written in rhyming verse. Perhaps the idea was to add some lightness to what otherwise would have been a gloomy event. For example, here are a few lines:

"I next bequeath my body to the dust

From whence it Came, which is no more than just.

Desireing yet that it bee laid close by

my eldest daughter though I say not why,

And leave my Grandchild Martha but her due

my Lands and all my Chattells save a fewe

you shall hereafter in this schedule finde

As for the rest of the story, Moore appointed four trusted friends to supervise Martha's inheritance. He also required that her second son, should she have one, live in Moore's house and the son adopt the name "Moore." That seems a small price to pay for what must have been a generous inheritance. He also named an alternative beneficiary should Martha die before becoming of age or marrying. Martha must have been at least 13 years old at the time as Moore's eldest daughter, also named Martha (Appleton), died in 1653. We also know that Thomas Moore died a year later, as granddaughter Martha erected a monument in the cemetery to her grandfather, Thomas Moore, "who passed happily to a better world on the 7th of November 1667." Item 12. £1,250 (US $1,572).