Antiquarian and Rare Books from Erasmushaus 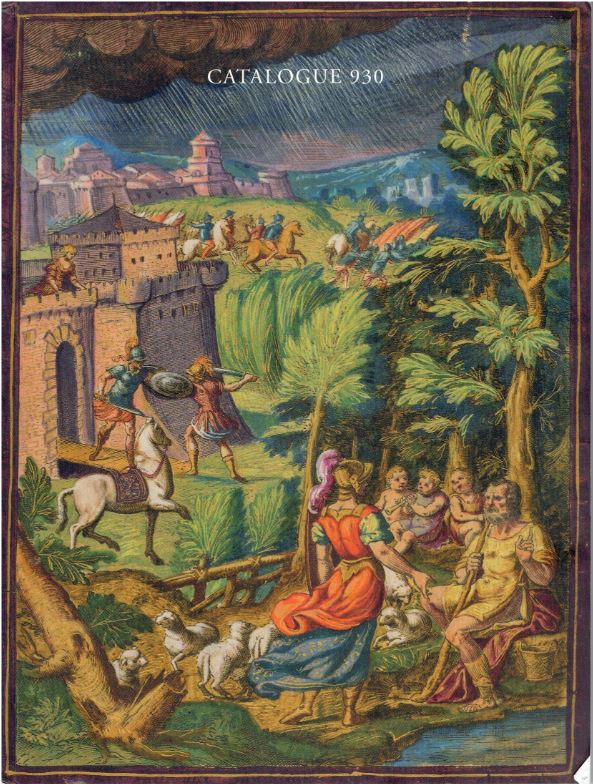 Erasmushaus has published their Catalogue 930. The only other title is Rare Books, which these are. We might add to that antiquarian. Most of what is found is of a very aged vintage. The dates range from 1472-1908. Fully half of the books offered are dated from the 16th century or earlier. Languages represented include several European tongues, including the once commonly used Latin. Many contain beautiful illustrations with coloring by hand. Topics vary. These are a few samples of what you will find.

We begin with the oldest book in the catalogue, Historia Naturalis by Plinius Secundus. The author is more commonly known as Pliny the Elder. While this book is ancient, having been published in 1472, it was written 1,400 years earlier when Pliny could still be found wandering around ancient Rome. His Natural History is one of the more complete and significant books to have survived from the time. It is filled with information covering numerous topics, sort of a precursor of the encyclopedia. It is presented in 37 books, covering fields such as astronomy, cosmology, meteorology, geology, geography, ethnology, anthropology, zoology, botany, agriculture, medicine, mineralogy, metallurgy, and fine arts. It remained a well studied and respected resource from Pliny's time right through its first printing and later. It served as a guide for da Vinci, Columbus, Michelangelo and others. Item 1 is a copy of the third printed edition, the first having come in 1469. It is known as the Jenson edition for its publisher, Nicolaus Jenson, and is noted for its beauty and clarity and for Jenson's typeface designs. Priced at CHF 225,000 (Swiss francs, or approximately $230,384 in U.S. dollars).

This is probably not the most highly cited of works by John (Jean) Calvin: Defensio Orthodoxae Fidei de Sacra Trinitarte, contra Prodigiosos Errores Michaelis Serveti Hispani, published in 1554 (Defense of the Orthodox Trinitarian faith against the prodigious errors of Michael Servetus of Spain). Servetus was a Spanish theologian and scientist who had debated anonymously by letter with Calvin for years. He had what were considered by Catholics and most Protestants to be unorthodox views on the Trinity, along with opposing infant Baptism. It was not a friendly debate. In the middle of the 16th century, Calvin held power as Protestant leader in Geneva where he determined to deal with what he deemed the heresy of the Spanish exile. I would not pretend to take sides in their theological debate nor even understand them, but Calvin's response was enough to make even a loyal Calvinist squirm. He had Servetus executed, not just executed but burned at the stake. He used slow burning wood to make sure Servetus fully appreciated the error of his ways. This book is Calvin's attempt to justify his actions. It wasn't easy. CHF 12,000 (US $12,286).

Calvin's actions led to a scathing response from Sebastian Castellio, but he was not without his supporters. After Catellio issued his response, this rare book in defense of Calvin was written by Theodore de Beze, under the pseudonym Martinous Bellius, De Haereticis a Civili Magistratu Puniendis Libellus, Adversus Martini Bellii Farriginem... also published in 1554. De Beze defends the indefensible, sarcastically labeling the execution of Servetus as "the martyrdom of this most innocent Servetus." Item 17. CHF 6,500 (US $6,654).

This is one of the more beautiful illustrated works of the 18th century. The images explode off the pages, almost literally. The title is Campi Phlegraei. Observations on the Volcanos of the Two Sicilies as they have been communicated to the Royal Society of London. Sir William Hamilton wrote four books on volcanoes, but this is the best. He was able to provide a clearer description of volcanic activity and explain his theories. Hamilton went to the volcanic sites in Italy, some of them underwater, others on islands, but also the well-known Vesuvius and Mt. Etna. He hooked up with artist Pietro Fabris in Naples, and the two visited various volcanic sites. At times, they were at notable risk as they went to observe active eruptions. They climbed Vesuvius at least 22 times so that Fabris could make sketches at various points in the cycle. His dramatic illustrations capture the force of the eruptions. There are 59 hand-colored plates in the book. Item 29, published 1776-1779. CHF 240,000 (US $245,684).

One of the most famous works of Egyptian illustrations in the days before photography is John Roberts' "Egypt and Nubia." It is a spectacular work of art. However, it was hardly the first. The ancient monuments of Egypt had fascinated Europeans for centuries prior. Here is probably the best such work as of a century before Roberts, with the similar title (in French) Voyage d'Egypte et de Nubie. It is the work of Danish navigator and traveler Frederik Ludvig Norden. Norden was commissioned by King Christian VI to draw the sites and bring back all the information he could find. Norden went to Egypt in 1737 and these two volumes contain his illustrations and descriptions of what he found. Norden died young, age 34 in 1742, his book being published posthumously in 1755. Item 26. CHF 18,000 (US $18,428).