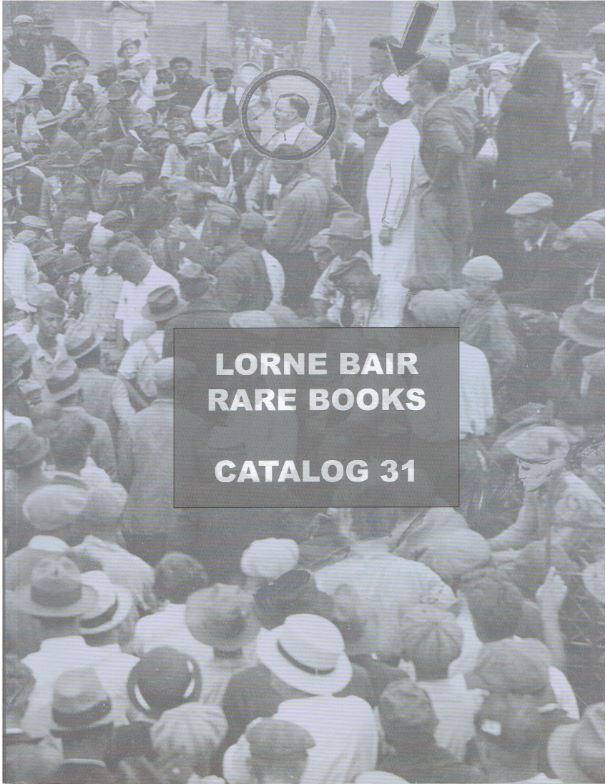 Lorne Bair Rare Books has published their Catalog 31. Bair specializes in radical literature, mostly from the left but occasionally from the right, and that material can be particularly unpleasant. The great majority is American, and while usually they have 20th century publications and manuscripts, this time there is a large selection from the 19th century as well. Most of these battles were fought long ago, and yet, the number of parallels to today's issues is more than you might like to see. History repeats itself all too often. Here are a few selections.

We start with what was undoubtedly the worst Supreme Court decision in U.S. history, one of such monumental significance that it likely was the last straw that sealed the inevitability of the Civil War. Item 9 is the first appearance of the court's Report of the Decision of the Supreme Court of the United States, and the Opinions of the Judges Thereof, in the Case of Dred Scott Versus John F.A. Sandford, published in 1857 (the decision was reached in December 1856). Dred Scott was a slave whose master had taken him to the free Missouri Territory. When he tried to take him back, Scott sued for his freedom, citing that slavery was not legal in the territory. The court ruled against Scott, deciding he was still the property of John Sanford. However, the court then took their decision far further. It ruled that Scott did not have the right to sue for his freedom as he was not a citizen. It determined that the rights of citizens spelled out in the Constitution did not belong to Scott because black people cannot be citizens. Anyone wondering why so many African Americans were extremely upset by claims that Barrack Obama was not a "citizen" of the United States need only look to this decision to understand why. It meant that not even free blacks, captured in free states and taken to the South, could contest their kidnapping since they lacked the rights of citizens. The Supreme Court also declared that the Missouri Compromise of 1820, which forbid the imposition of slavery in territories north of a dividing line, was unconstitutional because Congress could not outlaw slavery anywhere. Apparently, the court believed this would settle the slavery issue once and for all, but instead, the reaction was so great it practically guaranteed the issue would end up having to be resolved on the battlefield. Priced at $1,250.

Now, here is the other side. The year is 1870, the Civil War over, emancipation enacted, the 14th Amendment adopted which declared all native born and naturalized Americans to be citizens with all the rights and privileges thereof. The 15th Amendment, adopted in 1870, guaranteed another fundamental right, the right of all citizens, regardless of race, color, or previous condition of servitude, the right to vote. Of course, whites quickly devised all sorts of ways to get around this constitutional right, from intimidation to poll taxes, literacy tests and the like. Incomprehensibly, efforts continue to this day to make it difficult for African Americans to vote. Item 15 is a large hand-colored lithograph depicting the celebration of its passing in Baltimore on May 19, 1870. Black soldiers are seen marching in the center of the plate, being cheered on by whites. Surrounding the center are numerous vignettes, depicting scenes and portraits. From pre-war images in the fields to post-war views of African Americans in dignified settings, in some cases together with whites, their history is displayed. Portraits include notable white friends such as Lincoln, Grant, and John Brown, as well as blacks such as Frederick Douglass. $7,500.

Next, we have a book by the first woman to run for President. Victoria Woodhull ran for President in 1872, long before women were even allowed to vote. Not surprisingly, she lost. Like Hillary Clinton, she wrote a book after her defeat, but this one is nothing like anything Ms. Clinton ever wrote. The title is The Elixir of Life, or, Why Do We Die? published in 1873. Ms. Woodhull does not dwell on her election defeat. Ms. Woodhull and her sister, Tennessee Claflin, were a controversial pair, something of con artists. They spent their youth passing themselves off as mediums and finding ways to get rich men to support them. In this pamphlet, Ms. Woodhull argues that death is caused by disease and disease is caused by bad sex. You can see what the cure-all will be. Once death has been vanquished, the dead will return to earth to live in a utopia free of illness. It makes a village. I suspect that if Hillary Clinton has any such theories, she has the good sense to keep them to herself. Item 80. $1,500.

Here is one that sounds too similar to things happening today though it goes back the better part of two centuries. It is also a hand-colored lithograph, with the caption Death of George Schifler in Kensington, from 1844. It further states, "Murdered May 6 1844." Kensington is a section of Philadelphia. In the image, Schifler is seen bleeding from a chest wound, clinging to an American flag, while three other men try to help him. This comes from a time of race race riots in Philadelphia. Nativists attacked recent immigrants. The nativists claimed that Schifler was trying to save the American flag from desecration when he was killed. This sounds familiar, except in 1844, the villainous immigrants were different. The immigrants being attacked then were Irish Catholics, a double whammy to the nativists. They claimed the Catholics were trying to remove Protestant bibles from Philadelphia schools. The American Republican Party, a precursor of the Know-Nothings, staged their rally in Kensington, a largely Irish immigrant community. There were fights and gunfire and Schifler was the first nativist to fall. Item 25. $1,750.

This is another racist document, though this one is more pathetic than threatening. It was published by the Citizens' Council of Greater New Orleans in the 1960s. The White Citizens Councils were sort of more refined versions of the KKK, racists in business suits rather than sheets. This one boldly proclaims NOTICE! STOP. It's call to action is Help Save the Youth of America. Don't Buy Negro Records. This is not nearly so intimidating as burning crosses or hanging nooses. It admonishes the white public, "(If you don't want to serve negroes in your place of business, then do not have negro records on your juke box or listen to negro records on the radio.) The screaming, idiotic words, and savage music of these records are undermining the morals of our white youth in America. Don't Let Your Children Buy, or Listen To These Negro Records." And this came from the hometown of Louis Armstrong and Fats Domino, no less. Can you imagine how different history would be if Mississippi white boy Elvis Presley had heeded this call? Item 63. $650.