The Unusual in Books, Manuscripts & Ephemera from Samuel Gedge, Ltd. 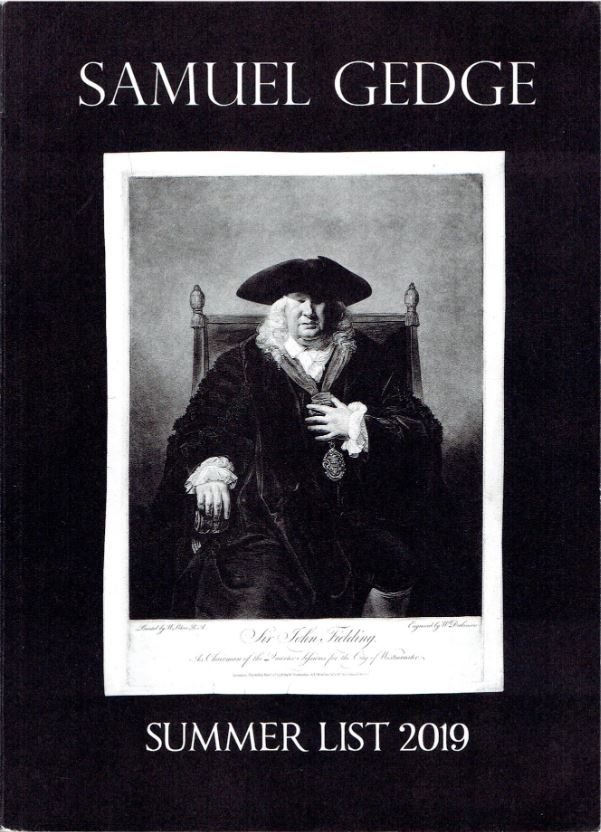 Samuel Gedge Ltd. has issued a Summer List of Books, Manuscripts & Ephemera. This is an extensive collection, almost 250 (249) items offered. Gedge always has an eclectic mix of material that defies easy description. What is found is antiquarian, rarely proceeding beyond the early 19th century. There are numerous documents, financial papers, ancient land transfers, lists of products for sale, show posters, portraits, and a surprising number of French translations of English books. These are generally obscure novels, which range from semi-decent to atrocious. Where the latter, Gedge is not reluctant to mention contemporary reviews. Outside of these novels translated to French, almost everything is in the English language. Here are a few examples.

We begin with a letter from a remote location. It comes from York, not the British one or the new one in America but the first inland town in western Australia. There aren't a lot of large, inland western Australia communities even today, so it must have been quite remote in 1838 when this letter was written. Actually, that was just two years after the town was founded. The letter comes from T. Carter to his mother, brother and sister back in England. Carter was a sheep farmer, producing wool to send back home. There wasn't a lot of exciting things going on in York, so he writes about the drought, how much wool he hopes to produce, and things of this nature. He does help out the family back home through his efforts as he explains, "nothing gives me so much happiness as the idea that I am...able to contribute a trifle to your comfort..." Item 111. Priced at £2,750 (British pounds or approximately $3,505 in U.S. dollars).

Next we have the story in German verse of Inkel und Yariko. It is a new version of the English tale of Inkle and Yarico, once very popular though probably not on many current reading lists. It was the work of Johann Jakob Bodmer, a noted Swiss author and poet of the 18th century. Published in 1756, it is based on a story first told a century earlier. Inkle, an Englishman, is shipwrecked in Barbados. The natives are not friendly, but Inkle is saved by a young maiden who hides him from the others. Finally, they are rescued by a British ship and take off for a new life together and live happily ever after. Not quite. Instead, Inkle, having lost money on his trip, sells his beloved and savior into slavery for the money. Obviously, this is at a minimum an enhanced tale, but whether it is based on a true story or total fiction is unknown. The fact that the story was written does make one wonder how the English in general treated the natives they encountered in the 17th century, as this does not reflect well on their moral values. Item 151. £750 (US $955).

Of course, the English weren't the only ones suffering from moral blindness when they entered the New World. The Spanish conquered much of the Americas with force, cruelty, and brutality. There were few who objected. Here is one of the few. Item 51 is a translation of the work of Bartolome de las Casas, a second French edition under the title Histoire admirable des horribles insolences, cruautez, & tyrannies exercees par les Espagnols es Indes Occidentales, published in 1582. Las Casas was a Spanish priest who spent most of the first half of the 16th century in the Caribbean and Mexico. He came to America with the early settlers but soon became disillusioned, then appalled by the treatment of the natives by the Spanish. He petitioned authorities back home to stop the brutality but essentially received little more than to be politely ignored. His achievements, sadly, were limited at the time, but at least he made others aware of the conditions. This translation, by Jacques de Miggrode, served its own purpose. It was designed by French Protestants to make the Spanish look bad. It is part of what has been called the Black Legend, attempts by Spain's enemies to make the country look particularly inhuman. The Spanish of this time deserved it, but so did many of their enemies who turned Africans into slaves and committed terrible brutalities against them. Item 51. £6,500 (US $8,288).

If you're wondering who is in the picture on the cover of the catalogue, it is Sir John Fielding, Chairman of the Quarter Session for the City of Westminster. In other words, he was a magistrate who lived during the 18th century. This image was published in 1778, which would make him 57 years old, though he looks older. He died two years later. The reason there appears to be a flap covering his eyes is that Fielding was blind, the result of medical malpractice when he was 19. Nonetheless, he went on to become a highly respected jurist. He was a half-brother of the well known novelist Henry Fielding. The artist was Matthew William Peters. Item 62. £1,250 (US $1,590).

Next we have a broadside circa 1820 promoting an exhibition put on by one Mr, Simnet. He was displaying "three of the greatest wonders of the present age," The Celebrated Miss Franciss, The Young Lincolnshire Giantess, Only Fifteen years of Age, and stands near 7 Feet High and the Smallest Ladies in the World, The Surprising Sisters, the Norfolk Dwarfs... The tall, relatively speaking, 21-year-old Ann Hurry was 30 inches high, while the diminutive Maria Hurry was only 26 inches tall and weighed 18 lbs. This one goes for £650, but those are monetary, not weight pounds (US $825). Item 173.

Alternatively, you could go to the Adelphi Theater and try the Laughing Gas. Mr. Henry, conjurer and ventriloquist, offered this audience participation treat. "The nitrous oxide, or laughing gas! will continue to be administered to any of the audience who may chuse to inhale it..." Today, you need to go to the dentist if you want that stuff. Item 174, published in 1824. £750 (US $952).