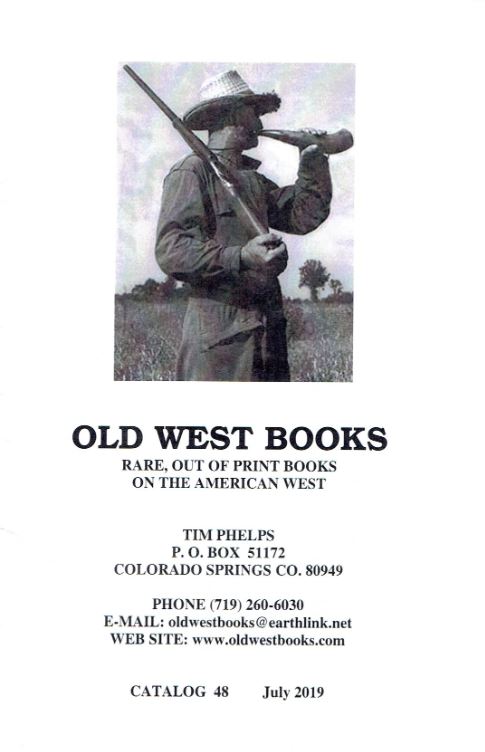 Rare books from the American West.

Old West Books recently issued Catalog 48 of Rare, Out of Print Books on the American West. You will find some of the familiar names, like Buffalo Bill and Jesse James, but there is lots from obscure people, ranchers, settlers, soldiers, regular people who tamed the land. And then there is poor Gen. Custer who remains a famed western character all because of the worst day of his life. Here are a few specific titles you will find.

We begin with a man who is himself obscure, but rode with some of the most notorious names in the West, Jesse and Frank James, the Younger Brothers, "Bloody" Bill Anderson and William Quantrill's Raiders. James Cummins came from Clay County in western Missouri, the front line between Confederate sympathizing Missourians and Kansas free soilers. He chose the Confederate side and rode with Quantrill's terroristic raiders. He then joined up with the Confederate Army, but when the war ended, he, like the James Brothers, transitioned to a gang of ordinary outlaws. He robbed trains and banks with the James-Younger gang until it was forced to disband, then headed to Montana with a new identity to lead a respectable life. No one knew who he really was. Perhaps that was just as well as some suspected he was involved in the plot to kill Jesse James since his sister, Artella, married Robert Ford, James' killer. He later returned to Clay County, but by then, he was immune from arrest as no one would testify against him. He lived until 1929, his last years in a Confederate home where he was known as a storyteller, the last survivor of the James-Younger gang. Item 25 is Jim Cummins The Guerilla, published in 1908. Cummins' account is extremely rare, Old West knowing of only two other copies, both in the same collection. Priced at $6,750.

Here is another autobiography of someone who cut his teeth with Quantrill's Raiders and would certainly have known Mr. Cummins. Item 80 is The Story of Cole Younger by Himself Being an Autobiography of the Missouri Guerrilla Captain and Outlaw, His Capture and Prison Life... published in 1903. The stories of the James and Younger Brothers weren't all that great after their outlaw days were over. Jesse James was murdered, John Younger killed by Pinkertons, Bob Younger died in prison, Jim Younger killed himself a year after release from prison unable to cope. Only Frank James, who was acquitted, and Cole Younger, who spent many years in jail, ever got to live out normal lives. Younger robbed banks, stages, trains, wherever there was money. It all went awry in 1876 when an attempted robbery of a bank in Minnesota resulted in a hail of gunfire. The James Brothers escaped, but the Youngers did not, captured after a shootout with a posse. The Youngers were sentenced to life in prison, but the two surviving brothers were freed in 1901. Like Frank James, Cole reformed, and for a while, went on tour in a wild west show with Frank James. This is his story and this book is also very rare. $5,750.

We all know what happened to Gen. Custer and his men, but did you ever think about what happened to his animals? They suffered too, though not quite as spectacularly as his men. The story of Comanche, the "lone survivor" of the Custer massacre, is well known. Comanche was a horse. While having just one survivor is not much better than none, it wasn't quite so bad. Several of their other horses also survived but were captured by the Indians. Comanche was left behind because he was in rough shape, thereby being found by the cavalry. Item 118 is Marching with Custer, a Day-by-Day Evaluation of Uses, Abuses, and Condition of the Animals on the Ill Fated Expedition of 1876 by Elwood Nye and Carroll Friswold. This is a 1964 limited edition book published by the Arthur H. Clark Co. $650.

Here is one of those tales by someone whose name you don't know, but her experiences were probably more harrowing than those of some of the outlaws. Emma Shepard Hill was just 14 years old when her family made the journey by wagon from St. Joseph, Missouri, to Denver. The year was 1864, and if they had been patient a few more years they could have taken the train. As it was, 1864 was a bad year. The Indians were desperate, searching for food, trying to hold on to the remnants of their land. The trip was spent in terrible fear. Passing soldiers warned them of killings of immigrants on the trail both ahead of and behind them. Dead cattle, abandoned wagons, an occasional body littered the route. At times they could see Indians in the distance, and frequently had to pass through deep ravines where they were sitting ducks. Somehow, they lucked out and made it to Denver. Miss Hill's book is titled A Dangerous Crossing and What Happened On The Other Side. The first part tells of the dangerous journey, the second is a diary of her new life in Empire City, Colorado. Item 40 is a copy of the very rare first edition, published in 1914. $2,750.

This is a book of poems, but one with a Custer connection. The title is Poems and Verses, by Mary Mapes Dodge. It's safe of say Gen. George Armstrong Custer never read these since the book is dated 1904 and Little Bighorm occurred in 1876. However, his incredibly loyal wife lived on, and on and on. She outlived him by over half a century, until 1933, 57 years after her husband's last stand. Evidently, Ms. Dodge was friendly with Elizabeth Custer, as she has inscribed her book "To dear Libbie Custer With much love from M.M.D." Then there is a second inscription. This one reads, "From Aunt Libbie to May Custer Elmer 14 Clark St. Bklyn." May Custer Elmer was George and Elizabeth's niece, specifically, the daughter of George's brother Nevin Custer. Elizabeth Custer lived in Brooklyn during her later years, far from the West of her younger days with George. May also lived there and did much to look after her aging aunt in her later days. May was with her when she died. Item 29. $675.

If Elizabeth Custer ended up heading east, Buffalo Bill headed even farther in that direction. Bill spent about a decade as a western guide and scout, which he then parlayed into a long career as a showman, bringing his exaggerated look at western life to the east. However, he discovered that not only did eastern Americans suck up this caricature of the West, Europeans loved it too. He not only took his show on the road, he took it over the sea. Item 36 is Four Years in Europe with Buffalo Bill. A Descriptive Narrative of the Big American Show's Tour in Foreign Lands, published in 1908. The author of this account of the 1903-1906 Wild West tour was Charles Eldridge Griffin. Griffin, like Bill, was a bit of a character himself. He had performed in circuses doing all sort of acts, magician, sword-swallower, ventriloquist, fire-eater and so on. He must have been a perfect fit for the show. $325.