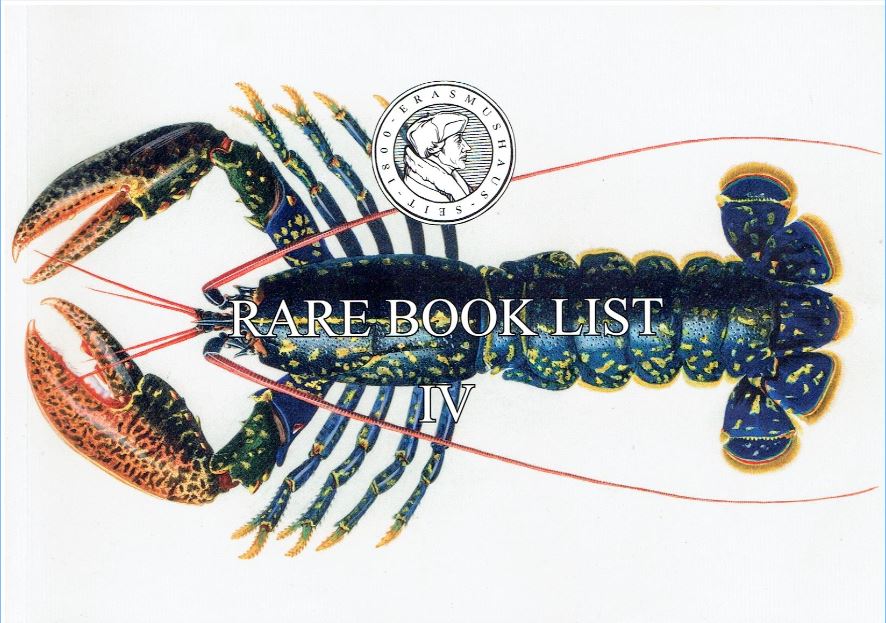 Erasmushaus, the Swiss bookseller, has released a catalogue entitled Rare Book List IV. The topics are diverse. The books are mostly quite old, ranging from Erasmus' time, the early 16th century, to as late as the 20th. The languages of the books are what you might expect with a Swiss antiquarian - Latin, French, and German, with a smattering of Spanish, Italian, even English. The catalogue itself is written in English. Here are a few selections from this latest catalogue from Erasmushaus.

We start with what "Printing and the Mind of Man" describes as "one of the first technological books of modern times." Published in 1556, the title is De re Metallica, by Georg Agricola. This lengthy book covers all aspects of mining and metallurgical processes, including prospecting, administration, duties of officials and most everything else necessary to know. Along with the text there are 273 large woodcut illustrations to make everything clear. Herbert Hoover described Agricola's book as "the first important attempt to assemble systematically in print the world-knowledge on mining, metallurgy, and industrial chemistry." Yes, that is the same Herbert Hoover Americans remember as one of their least favorite Presidents. While Hoover was not that successful as President, he had previously been a mining engineer, consultant, and investor and he translated Agricola's work to English. Item 2. Priced at CHF 35,000 (Swiss francs, or approximately $35,345 in U.S. dollars).

The close alliance between America and France that developed during the American Revolution would fade away during the years of the French Revolution, but here is an important reminder of that close relationship in 1790. It is titled Eloge Civique de Benjamin Franklin...au Nom de La Commune Paris... It was an eulogy given before the Deputies of the Paris Commune on July 21, 1790 in honor of Benjamin Franklin. Franklin was long closely associated with France, serving as America's representative in Paris, and working with that ally during America's revolution. Franklin had died earlier that year. The speaker was Claude Fauchet. Fauchet was a clergyman, but not a typical one as he was a political radical. He was one of the leaders of the attack on the Bastille, freeing the inmates from that notorious prison. As a fellow revolutionary of Franklin in another land, he spoke elegantly of the great American. Over three thousand people attended, including Lafayette. His eulogy was the only one the Paris Commune would have printed and delivered to the National Assembly and to the Congress of the United States. Unfortunately, as the French Revolution quickly grew more radical and turned into a reign of terror, Fauchet would all too soon need someone to deliver his own eulogy. As one radical group was replaced with another, Fauchet would become ensnared in the terror and was sent to the guillotine in 1793. Item 21. CHF 800 (US $815).

One good eulogy deserves another, and Franklin was worthy of lots of good eulogies. Honoré Gabriel Riqueti, comte de Mirabeau, though a nobleman, was also an early leader of the French Revolution. Like Fauchet, he was blessed with oratorical skills of which he made the most. He was a leader of the Constituent Assembly at the time of the storming of the Bastille, someone who would be considered a moderate as once radical positions quickly became thought of as moderate. Rather than a complete overthrow of the King, Mirabeau favored a constitutional monarchy. Those positions made him popular at the time. Soon enough, Mirabeau, too, would need someone to read his eulogy, but at least he got one. He had the good sense to die in 1791 of natural causes when he was still popular, before everyone with even the slightest hint of moderation was put to the guillotine. His timing was particularly good as the following year it was revealed that he may have been cooperating with the King. Item 22 is his eulogy to Franklin, Discours du comte de Mirabeau...sur la mort de Benjamin Franklin... published in 1790. CHF 600 (US $611).

Here is a book published in a revolutionary year, at least for Americans - 1776. Erasmushaus describes it as "the first architectural book for the Americas." However, it was not so much meant for what would soon become the United States as it was for the Caribbean. The title is Différens projets relatifs au climat et à la manière la plus convenable de bâtir dans les pays chauds, et plus particulièrement dans les Indes Occidentales... the author Chevalier d'Albaret. It is a book on colonial architecture for the tropics of the West Indies. The plans are designed to deal with the heat, humidity, torrential rains, even hurricanes and earthquakes these islands experienced. So you will find structures that are well-ventilated, roofs designed to draw water away, and courtyards covered for protection from sun and rain. There was one more hazard with which d'Albaret felt he must deal - slave revolts. They provide various protections, one even containing a moat and drawbridge. Not a lot is known about the Parisian architect d'Albaret, including his first name. CHF 18,000 (US $18,334).

This is one of the more important accounts of early Mexican history and the land's conquest by Spain, Historia de la Conquista de Mexico..., by Antonio de Solis. De Solis had previously been a playwright when he changed careers and traveled to Mexico on behalf of the Spanish crown. It should be noted that by the time Solis went to Mexico, in the 17th century, much about which he was writing had already occurred 150 years ago. He handled that by using the chronicles of earlier writers along with documents to which he had access. As a representative of Spain, he spoke highly of the founding Spanish conquistador, Hernan Cortes, a man not beloved by all. The first edition of Solis' work was published in 1684. By the time of the printing of this 1756 edition, there had already been around 25 earlier ones of this popular account. Item 52. CHF 950 (US $968).