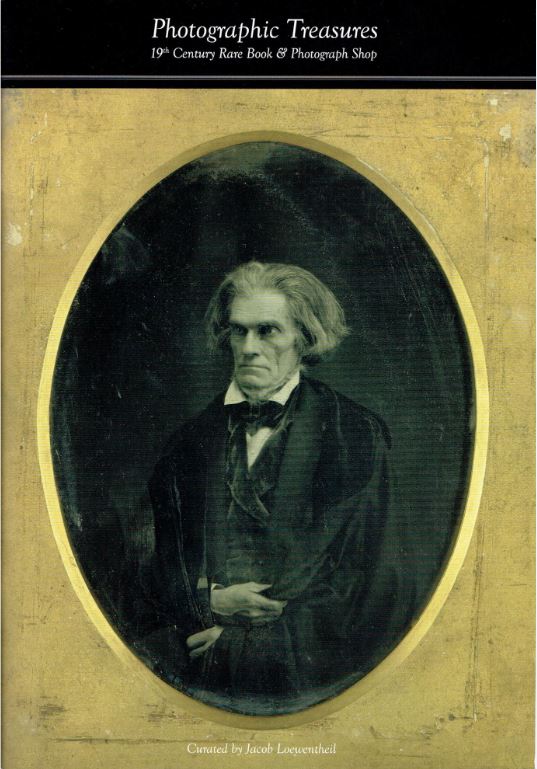 The 19th Century Rare Book & Photograph Shop has issued a catalogue devoted to the latter of those two specialties. It is titled Photographic Treasurers. Naturally, 19th century photographs are going to be early, the first somewhat usable photographs having been developed in 1839. Some of the photos herein bleed over to the 20th century, as late as 1969, but there is much very early, as far back as the 1840s. The photographs selected for this catalogue are special, productions of great photographers, works of art, portraits of important people, features that make them extraordinary. Some are unusually large, especially considering their era. If a picture is worth a thousand words, those must be worth many thousands. Here are a few selections from this catalogue of photographs.

We begin with a collection of 40 mammoth plate photographs of the American West taken in 1863-1874 by Carleton Watkins. Watkins was able to create his spectacular photos by using his mammoth plates, affording the ability to capture greater detail than other photographs of this time. His camera could accommodate plates 18" x 22". These photographs are 16" x 20". He had a special cabinet made to hold the glass plates. It all weighed almost 2,000 pounds. Watkins got a wagon, hitched up a team of mules, and went out into the wilderness to take his photographs. This collection contains numerous pictures of Yosemite and some extremely rare ones from Utah. His photographs of Pulpit Rock and The Sentinel in Echo Canyon, Utah, are known only in two other copies. In 1876, Watkins took his photographs to Philadelphia for the 1876 Philadelphia Centennial Exposition, America's first world's fair. These are evidently ones he displayed there. Each is titled and attributed in a skilled calligraphic hand. Watkins commissioned master calligrapher Fulgenzio Seregni or his followers to label the photographs for his display at the fair. The collection was purchased by the 19th Century Shop from a Philadelphia family which identifies them as being the ones exhibited at the 1876 exhibition. Price On Request.

The stern face on the cover of this catalogue belongs to one of the great orators, senators, and holders of other important government positions during the first half of the 19th century. Along with Webster, Clay, and Benton, John C. Calhoun was one of the major forces in government through the sheer power of his words. Along with several terms as a senator and congressman, as well as Secretary of War and Secretary of State, Calhoun served two terms as Vice-President, under separate Presidents, John Quincy Adams and Andrew Jackson. Unlike the others, who came from northern or border states, Calhoun represented the Deep South, South Carolina specifically. While early in their careers, the Era of Good Feelings, these great leaders who never became President were more closely aligned, the division between North and South separated Calhoun more as the years went by. In his second term as Vice-President, a rift developed between Calhoun and Jackson, much of it personal, but partly based on the emerging Nullification Crisis when South Carolina first threatened to secede. After Jackson beat this back, the divisions North vs. South continued to widen over the issue of slavery and Calhoun became slavery's greatest defender in the Senate. By the end of his life, in 1850, Calhoun was issuing dire warnings that Northern abolitionism was leading to a break down of the nation and Civil War. His warnings were not just observations but could be seen as support for such a move if any steps were taken by the federal government which might interfere with the South's "peculiar institution." The daguerreotype of Calhoun offered was taken in 1849, the year before his death, when he was 67 years of age. The photographer was one of the greats, Mathew Brady. He photographed many of the notable people in these early days of photography and operated a very popular portrait gallery. His camera preserved the images of Presidents Jackson and Adams, each of whom died in the early days of photography. He would later go on to be known for his photographs of the Civil War. Pictures of Calhoun are extraordinarily rare, the only other such large photograph, also taken by Brady, at the Beinecke Library at Yale University. $650,000.

For the sake of regional and political balance, here is another Mathew Brady photograph, though it comes 16 years later. This one is a cabinet card, and it is signed by Brady to J. E. Kelly. The photograph is of Ulysses S. Grant. Grant is seated, legs crossed, in military uniform. He carries the four stars of a four-star general, the photograph preceding his time as President by several years. The 19th Century Shop notes that there are many "signed" Brady photographs, but the great majority were signed by assistants in his studio. This one contains Brady's distinctive scrawl. Despite being a great photographer, Brady had very poor eyesight and was semi-literate. It made for a distinctive, though messy signature. J. E. Kelly was a sculptor and illustrator who, like Brady, concentrated on Civil War depictions at the time. $52,000.

Long before there was Disneyland and the myriad other theme parks of today, there was Coney Island. Coney Island isn't itself an amusement part. It includes residences and other features, but this piece of New York City was its premier beach and amusement park area in the first half of the 19th century. It drew in millions of visitors each year. Offered is a large panorama (9" x 48") of Coney Island in 1907. It was at its height of popularity then. The most dominant feature in this panorama is Dreamland. At this time, there were three major amusement parks on Coney Island, but the tall Dreamland towered over them all. Dreamland, designed to put competitors Luna Park and Steeplechase Park to shame, opened in 1904. Marked by its tower with one million electric light bulbs (still a relatively new invention), it was an amazing sight. It did not last long. Just before its season opening in 1911, a fire started in Hell's Gate, ironically, a water ride. It quickly spread throughout the park. Dreamland was totally destroyed, never to be rebuilt. $4,500.

Now, we will move ahead to more recent history. This one is out of this world. It is a picture of Neil Armstrong, the first human to step on the moon, next to the recently planted U. S. flag. The photograph was taken by Buzz Aldrin, the pilot of the lunar landing module. This is a large photograph, 20" x 16". It has been inscribed by the three members of the Apollo 11 mission, Armstrong, Aldrin, and Michael Collins, pilot of the command module. It is inscribed to William and Peggy Burden. William Burden was an heir to the Vanderbilt fortune who made his own fortune in aviation securities. $28,000.