Other Places, Other Lives from Shapero Rare Books 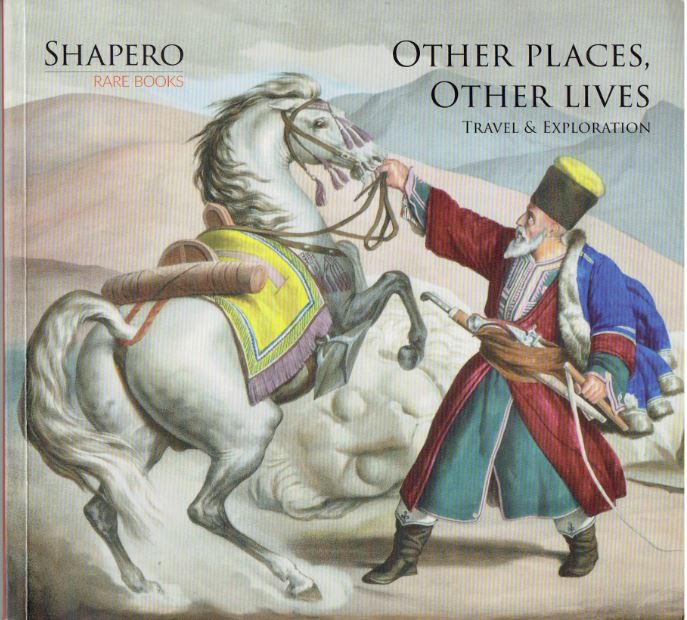 Other Places, Other Lives.

Shapero Rare Books has issued a catalogue entitled Other Places, Other Lives. Travel & Exploration. The travelers and explorers were mostly Europeans. The places they went were... everywhere! The catalogue is divided into sections based on destinations (or in one case, the named explorer). Here they are: Richard Burton; Africa; The Americas; Antarctica; Central Asia; China; Europe; Greece, Turkey, the Levant & the Middle East; India & South East Asia; and The Pacific. These are a few selections from these travels.

We will begin with an account of one of the most important explorations in terms of archaeological findings ever. Howard Carter was an archaeologist and Egyptologist who spent years searching for the perfect tomb filled with untouched artifacts. The problem was that grave robbers had swiped most of the best stuff from the ancient pyramids, leaving little for scholars to study by the time of the 20th century. Carter was fortunate in having a wealthy sponsor for his work in Lord Carnarvon, but eventually even he tired of funding unsuccessful missions. Carter managed to talk him into one last attempt in 1922 and this one hit the jackpot. Carter found the undisturbed tomb of King Tutankhamen, the boy king. "Tut" ascended to the throne at the age of 9, and was dead by 19, probably from disease or an infection resulting from an accident. When Carter realized he was on to something, he called for Carnarvon to join him as he slowly and carefully made his way to the burial chamber. Along with the untouched artifacts was the body of Tuthankamen, remarkably well preserved for someone who had been dead for over 3,200 years. Carnarvon died only a few months later, but the discovery was such a public sensation that Carter was able to carry on his work for years. Indeed, he spent another ten years on his find, publishing, in three volumes, from 1923-1933, this work - The Tomb of Tut-Ankh-Amen Discovered by the late Earl of Carnarvon and Howard Carter. The first volume was co-written, actually mostly written, by Carter's assistant, A. C. Mace. Item 96. Priced at £3,250 (British pounds, or approximately $4,135 in U.S. dollars).

Here is another look at the past in Egypt and the Middle East, though not nearly as distant as the time of the Pharaohs. John Gardiner Kinnear came from a family of bankers and headed to this region on business, but ended up doing more in the way of personal exploring. He wrote a bunch of letters back home which became the basis of his book, Cairo, Petra, and Damascus, in 1839. With remarks on the government of Mehemet Ali, and on the present prospects of Syria, published in 1841. He arrived in Cairo in 1839 and met up with a friend whose book was also being created in Egypt at the same time, but whose work is far better known and will cost you a lot more, John Roberts. Roberts' Egypt and Nubia was created from some of the same wanderings, but while Kinnear was writing letters, Roberts was drawing what he saw. Kinnear's book is dedicated to his friend. The two split up when Kinnear continued on to Syria. Syria was in transition at this point, the European nations forcing Ali out of the area and limiting his rule to Egypt and Sudan. As such, he was demonized in the West, but Kinnear speaks more positively of his rule. Certainly, Syria could not have been worse off than it is today. Item 105. £1,500 (US $1,902).

We travel across the ocean to America for this next one. It takes place in today's American Southwest. Item 32 is Narrative of an Expedition Across the Great South-Western Prairies, from Texas to Santa Fe with an Account of the Disasters which Befell the Expedition. This is an 1845 second edition of George Wilkins Kendall's description of a failed attempt by Texas to seize a part of New Mexico. It was originally published the preceding year. Having won their independence from Mexico a few years earlier, the Republic of Texas figured New Mexicans would feel the same desires. Besides which, they believed that Texas' boundary continued along the Rio Grande far beyond El Paso, which placed the eastern part of New Mexico and part of Colorado, even Wyoming, within their perceived borders. The Texans were not welcomed as they expected. They were not well-prepared, but the Mexican Army was. The locals wanted nothing to do with them. The Texans were routed, but were fortunate in that rather than executing them on the spot, the Mexican Army marched them to Mexico City, 2,000 miles away. The U.S. government intervened to get them released. Kendall provides a first-hand account of the disaster as he was a participant. A few years later, the U.S. would seize the territory from Mexico during the Mexican War, but as part of a deal to pay off Texas' debt from its republic days, Texas gave up its claims to this territory which became parts of the new state of New Mexico and others. £850 (US $1,078).

Ephraim Paggitt was a 17th century English clergyman who seemed to dedicate much of his life to criticizing the theology of anyone who did not share his Puritan, Calvinist theology. This doesn't sound like a topic for a catalogue of travel books, but here is the connection. This title takes a look at Christians around the world, that is, those not living in the major Christian nations of Europe. Item 109 is his Christianographie, or, a Description of the multitudes and sundry sorts of Christians in the world not subject to the Pope. With their unitie, and how they agree with the Protestants in the principall points of difference betweene us and the Church of Rome. Published in 1635, you can guess from the title that this is a book not favorable to the Catholic Church. This attitude is not surprising for an English Protestant of his day, but a few years later, he would also write a book attacking many sects of Protestantism that differed from his own views. Unfortunately for Pagitt, his traditionalist views also made him a strong royalist, which did not sit well during the English Civil War. He was forced into retirement. Perhaps what is more notable than its theology about Christianographie is its four folding maps, designed to show all the non-Papist Christians in the world. It is more interesting today for its mapping of foreign lands as believed to be in 1635. £2,000 (US $2,537).

Here is a look at what was a somewhat mysterious land at the time, but it's a book that's hard to know exactly what to make of it. It is one of several concerning Siam, now known as Thailand, written by Anna Leonowens. Leonowens was the widow of a British public servant who had worked in the East. She taught and operated a school in Singapore after her husband's death, which led to an opportunity to be a teacher and governess for the King of Siam. She accepted and for six years was deeply involved in the King's household, perhaps even wielded a small amount of influence with him. She had her differences with the King's views, not surprising considering the gap in culture. He found her difficult but put up with her anyway. She returned to England for some rest after six years. The King died shortly thereafter, and while she maintained a friendly correspondence with his son and new King, she was not invited back. She wrote a couple of books, including this one, The Romance of Siamese Harem Life, published in 1873. Her books have a mixed reputation. She relayed much information about a world otherwise not well known, but her accounts appear laced with exaggeration and perhaps some fictionalization. Some less pleasant characteristics attributed to the King have been challenged by those more familiar with him and the Court. All of this probably would have been forgotten long ago except that one of her books became the basis for the novel Anna and the King, which was the basis for the much more popular Rogers and Hammerstein musical play and movie, The King and I. Item 124. £1,250 (US $1,586).