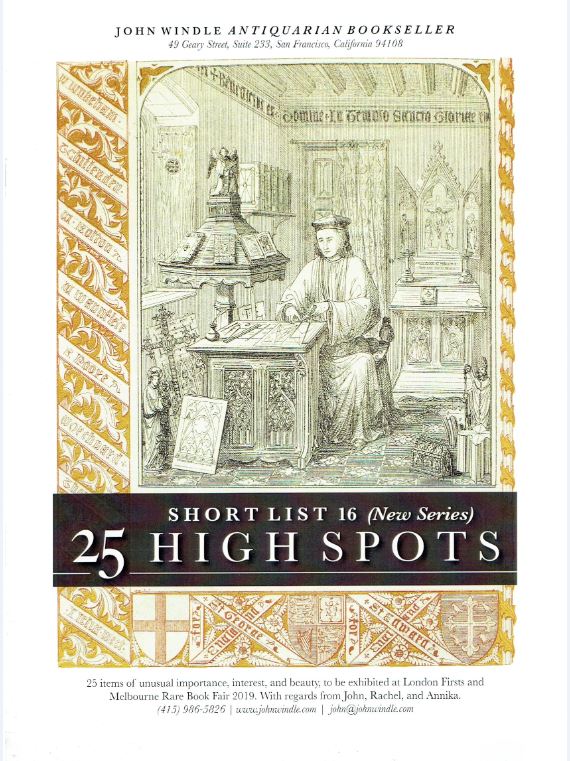 John Windle Bookseller has issued a new "short list," this one entitled 25 High Spots. The bookseller describes it as "25 items of unusual importance, interest, and beauty, to be exhibited at London Firsts and Melbourne Rare Book Fair 2019." These books are doing some serious traveling. Since their description, while concise, says it all, we will move ahead to look at a few specific titles in this catalogue.

We begin with what Windle describes as a "[f]irst edition of the single most important scientific book ever published." Certainly, it completely changed how we as humans saw ourselves, and many people did not like that (still don't). Item 10 is a copy of the 1859 first edition of On the Origin of Species by Means of Natural Selection... by Charles Darwin. There were previous believers in evolution, including Darwin's grandfather, but they all thought that either there was something in the nature of living beings that made them change, or that species somehow changed themselves to become better adapted to their environment and then passed these new traits on to their offspring. No one saw it as random variations which occur in an individual which prove to be favorable to their environment, giving that individual a survival advantage and a better chance of passing on those randomly acquired advantages. Of course, this contradicted the biblical creation story and, at least, removed God from active participation in human development. This was hard for most of Darwin's contemporaries outside of the scientific community, and many within, to accept. It is not only, perhaps, the single most important scientific book ever published but the most controversial one as well. Item 10. Priced at $87,500.

Here is another Darwin book, not of as earth-shattering importance as Origin of Species, but extremely rare thanks to a few handwritten words. This one is The Power of Movement in Plants published in 1880. With this book, Darwin was assisted by his son, Francis, himself a notable botanist. This book is a study of the movement of climbing plants. What makes this copy rare is that it is inscribed, in Charles Darwin's hand, to his daughter Elizabeth - "Elizabeth Darwin, From her Father." There are numerous Darwin presentation copies of books, but most are inscribed (by the publisher, not Darwin) "from the author." A presentation copy inscribed in Darwin's hand is very rare, one to a family member exceptionally so. Very little is known about Elizabeth Darwin. Several of the ten Darwin children became well-known in their own right, but the child about whom the least is known is Elizabeth. She was apparently the least bright of the Darwin children, perhaps having some learning disability. She lived with her parents until both died and never married. She did live on her own for many years after her mother died, close to some of her siblings, to whose children she was "Aunt Bessy." Item 11. $125,000.

Next is another important scientific work, not on quite the level of Darwin, but important to medicine as well. It is the only book to appear on three Grolier 100 lists (American, science, and medicine). Windle notes that this is a first edition, first issue "of what has been termed the greatest single contribution to the knowledge of gastric digestion." There is also a strange story behind it. The title is Experiments and Observations on the Gastric Juice, and the Physiology of Digestion. The author was William Beaumont, the book being published in the far northern New York border town of Plattsburgh in 1833. Beaumont was an army surgeon on the frontier of Michigan when French Canadian woodsman Alexis St. Martin walked in, suffering a grievous wound to the stomach. He had accidentally been shot in the stomach. His chances were not good, but Beaumont managed to save his life. When he healed, St. Martin consented to placing a skin flap over the hole which enabled Beaumont to peer in to his stomach and observe the processes inside. This explains how he was able to conduct experiments and observations of gastric juices. The great physician, "Father of Modern Medicine" William Osler, unsuccessfully attempted to obtain St. Martin's stomach after he died at age 78 and later wrote, "To the medical bibliographer there are few more treasured Americana than the brown-backed, poorly printed octavo volume of 280 pages with the imprint of Plattsburgh, printed by F.P. Allen, 1833." As you might guess from that description, Osler was also a bibliophile. This copy has the provenance of the noted 19th century physician Willard Parker. Item 1. $3,750.

This next item is a schoolbook, though a bit more valuable than the typical school text. The title is The Pastorals of Virgil, with a Course of English Reading adapted for Schools, edited by Robert Thornton, published in 1821. The purpose of this book was to teach schoolchildren Latin, though in choosing Virgil, Thornton wanted to inspire them to think too. This was the third edition of Thornton's text. The first edition had no illustrations. He added a few to the second and sales went up. Thornton decided to add a lot of them to the third edition, figuring that would really boost sales. If Thornton's name is not much remembered, that of the man he called in to create some of the woodblocks is. That would be William Blake. Blake had a decent reputation by then, though was never appreciated during his lifetime the way he was a century later. The publisher didn't like his woodcuts, wanting them recut. Fortunately, other artists convinced Thornton that was not a good idea, and he used them anyway, though the publisher cut down the blocks and printed them poorly. Windle says that "the impressions of the woodcuts in this copy are the richest I have ever seen." Perhaps that is because this was a special copy, not one shipped off to schools. It is a presentation copy inscribed by Thornton to his daughter. As such, it was kept in excellent condition, unlike those that ended up being handled by schoolchildren. Fortunately, the blocks were saved and published again shortly after Blake's death in 1827 and in a small portfolio 150 years later in 1977. Item 3. $67,500.