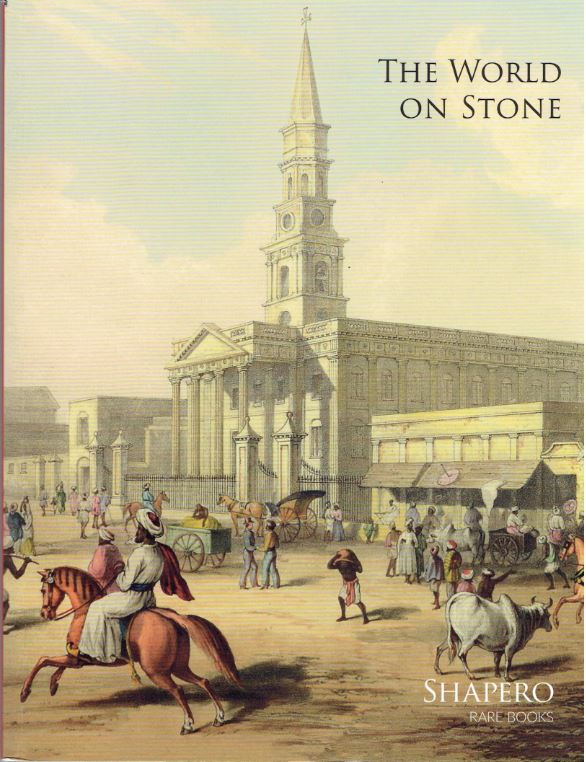 The World On Stone.

Shapero Rare Books has issued a catalogue entitled The World On Stone. To understand that title, you need to divide it into its composite parts. First is the world. The books in here are primarily based on travels, sometimes nearby, other times distant, by English and other European travelers. However, these are not accounts of expeditions and explorations typical of travel books. Rather, these are visual accounts, renderings by artists who visited expressly for the purpose of painting these scenes or were in distant lands for other purposes and made the most of the opportunity. The stone part of the title refers to the process. The images were created on stone, that is, through lithography. Developed in the late 18th century, lithography made it possible to create better quality printed drawings than were seen before. That date of invention also dates the books herein. With cheaper processes developed later on, the 19th century was the high point, though fine work is still done this way. The result is that what we have here is a catalogue of books filled with beautiful artists' views published during the 19th century. Here are a few.

We will start with a pictorial record of one of the greatest of world's fairs, the first one on such a grand scale. Its major patron and promoter was Prince Albert, Queen Victoria's husband, who envisioned a major exhibition to display the world's progress in many fields. It was spectacular. Joseph Paxton designed the hall, the famed Crystal Palace. It was 1,851 feet in length, 408 feel wide, and 128 feet tall. It was constructed from steel and plate glass. Exhibitors came from 26 countries, 14,000 of them in all. More than 100,000 objects were placed on display. Over six million people attended. The exhibitions were divided into four main categories, arts, manufactures, machinery, and raw materials. There were steam engines, hydraulic presses, carriages along with numerous smaller items displayed. When the fair was over, Londoners loved the palace so much that it was picked up and moved to a new location. It remained there until 1936 when it was consumed by fire. While the structure was steel and glass, sadly, the floor was wood. Item 24 is Dickinson's Comprehensive Pictures of the Great Exhibition of 1851, from the Originals Painted for H.R.H. Prince Albert. It was published by the Dickinson Brothers in 1854. It comes in two volumes and contains 55 chromolithographs after Joseph Nash, Louis Haghe, and David Roberts. Priced at £15,000 (British pounds, or approximately $18,946 in U.S. dollars).

Speaking of David Roberts, he is noted as the artist on two of the most spectacular illustrated works of the 19th century. Those two amazing works are one on the Holy Land, and this, Egypt and Nubia from Drawings Made on the Spot by David Roberts, published 1846-1849. Roberts actually began his work on this large project in 1838 when he traveled to Alexandria to prepare his plans. He was the first European to get unlimited access to the mosques in Cairo and then was able to sail up the Nile to visit the ancient monuments. He was back in London in 1840 with his artwork, which was placed on exhibition. However, convincing someone to publish the book was not easy as the cost would be great, but Francis Graham Moon agreed to put up £50,000, an enormous sum in the day. Item 46 is in the deluxe format with colored and mounted pictures. It cost three times as much as the basic format. £150,000 (US $189,469).

One spectacular book deserves another. This one comes in nine elephant folio volumes, weighing about 65 pounds each. You don't read this in bed. It contains great textual detail, though it is the illustrations that are even more amazing. The title is Antiquities of Mexico: comprising facsimiles of ancient Mexican paintings and hieroglyphics... The author was Edward King, Viscount Kingsborough. He brought in Italian artist Augustine Aglio to create the facsimiles of all sorts of ancient Mexican art and documents. King and Aglio traveled far and wide to create this printed collection, but not to Mexico. Rather, they visited numerous libraries in England and on the continent that possessed this ancient material. There is much pre-Columbian history here though it also documents the Spanish arrival and destruction of the Aztec empire. King had become fascinated with ancient Mexican history while at Oxford and wished to make this history, scattered throughout European libraries, readily available to scholars. He was also a follower of a prevalent theory of the day, that the American natives were a lost tribe of Israel. Aglio's illustrations are filled with bright colors and the early Mexican art is almost surrealist, or reminiscent of Picasso. This was another extremely expensive undertaking, and Irish nobleman King ended up in a debtor's prison in Dublin when he couldn't pay his paper manufacturer. There he caught typhus and died. Two years later his father died, and he would have received more than enough in inheritance to pay his debts and carry on the project. Item 31. £90,000 (US $113,661).

George French Angas was an English explorer, naturalist, and artist who traveled to Australia in the 1840s and stayed for many years. He accompanied an inland expedition in 1844 and became familiar with the young land. He put his artistic talents to work in this book, South Australia Illustrated, published in 1847. Quoting Wantrup (and I will confess to not knowing him), Shapero says, "...his views of towns and scenery of the Aborigines and of the flora and fauna offer an outstanding - if romantic - interpretation of the Australian landscape. It is a rare book...and one that has always been held in high esteem." Item 6. £22,500 (US $28,454).

Here is another from Angas illustrating Australia's neighbor. Item 5 is The New Zealanders Illustrated, also published in 1847. From Australia, Angas went to New Zealand where he traveled on foot for 800 miles. He visited the wildest regions of the country, sketching the countryside and the native Maori people. £17,500 (US $22,128).