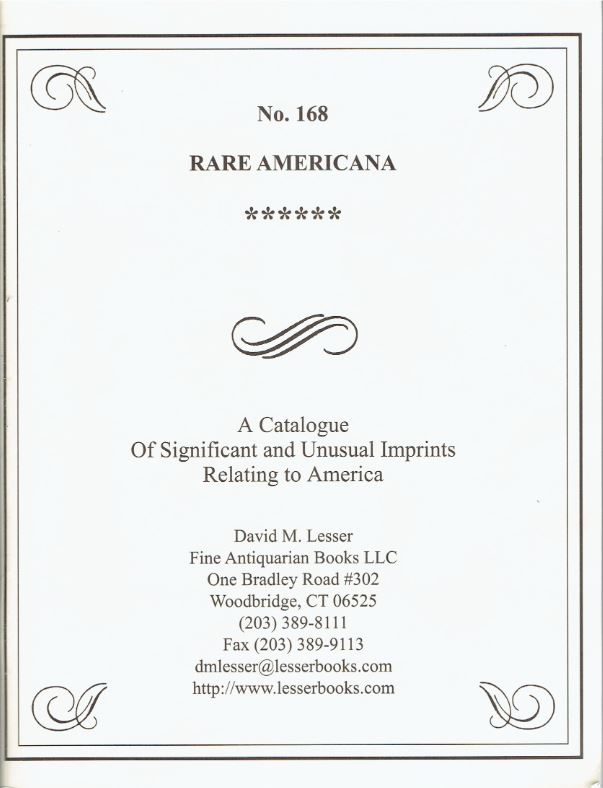 David M. Lesser Fine Antiquarian Books has issued a new selection of Rare Americana. Catalogue 168. It contain many selections of Americana, mainly from the time of the Revolution to Reconstruction and the days shortly after the Civil War. Politics and religion are frequent topics of the day, then as now. There is also crime and punishment, moralizing, slavery and abolition, and anything else on the minds of Americans that inspired them to put pen to paper. Here are a few of these recent selections.

Daniel Webster was one of the greatest speakers and lawyers in American history, but not even Webster could save this guy. This comes from early in his career - 1806 - but even at the height of his power, defending Josiah Burnham would have been an overwhelming challenge for Webster's oratorical talents. Burnham was not only a murderer but already a thoroughly disliked person before his fatal act. Item 14 is An Analysis or Outline, of the Life and Character of Josiah Burnham, Who Was Sentenced to Death... Josiah Burnham was a New Hampshire land owner whose unpleasant disposition and litigious behavior made him unpopular with his neighbors. He became insolvent through his many disputes, engaged in forgery and swindling, and was a co-respondent in a divorce action. What she saw in him is beyond comprehension. It landed him in jail. He was placed in a cell with Capt. Joseph Starkweather and Russell Freeman, who were also New Hampshire's guests as a result of unpaid debts. Apparently, they taunted Burnham, who obviously had no sense of humor, about the divorce action. Unfortunately for them, Burnham had fashioned a knife while in prison. He sliced Starkweather to death, and after watching him die, turned his favors to Freeman. Burnham pleaded not guilty and Webster and another lawyer had the honor of defending him. Years later, Webster looked back at the case and said for the only time in his life, he argued a case on the basis of opposition to capital punishment as there were no matters of fact or law he could argue in Burnham's favor, nor any good character witness to plead in his defense. Burnham was convicted, but received an odd reprieve. After execution, his body was to be brought to the Dartmouth Medical School for dissection, but the July weather was too hot for safe transportation. The weather must have been cooler in August as the execution was carried out, a reported 10,000 spectators coming out to witness the event. There were no tears shed. This pamphlet recounts part of Burnham's life story in his own words. He blamed it all on being mistreated by others. Priced at $2,000.

A former U.S. President surprisingly spoke out clearly in opposition to South Carolina's secession at the end of 1860, the beginning days of the rebellion. It wasn't that Andrew Jackson would have favored South Carolina's secession. He had put down such an attempt at rebellion by that state 30 years earlier. What made Jackson's voiced opposition surprising was that he had been dead for 15 years. Fortunately, he had a spokesperson to relay his thoughts. That voice was Mrs. Cora L.V. Hatch, a medium. Mrs. Hatch had been a seer since a child. She now gave "trance lectures." She would enter a hall already in a trance and lecture on a subject chosen by the guests. Believers attributed her words not to herself but to those who spoke through her. On this evening, it was Andrew Jackson. Jackson reputedly said that this government founded on the highest of inspirations was about be destroyed. "Heaven forbid that it should be so!" he exclaimed. He went on to describe "the secret impulses which prompts the vile and traitorous sons of despotism and pollution to attempt to overthrow the highest, the brightest, and the truest government on earth." Not even death could stop Jackson from speaking his mind. Item 61 is A Lecture on Secession, by Gen. Andrew Jackson, Delivered at Dodsworth's Hall, on the Evening of Sunday, Jan. 19, 1861. $650.

The Battle of Gettysburg was a turning point in the Civil War. The South would still have its good days but the Union had more resources from which to draw. These next two items are a sign of the deteriorating situation in which the Confederacy found itself. First, from April 16, 1864, is A Proclamation. To All the Soldiers in This Department Absent from Their Commands Without Leave. It came from Lieut. Gen. Leonidas Polk, an Episcopal Bishop from Louisiana, who was also a West Point graduate that traded his clerical robes for a soldier's uniform. In this proclamation Polk offers a pardon to Confederate soldiers who have gone AWOL. He hopes they will take advantage of "this last opportunity now presented for wiping out the disgrace which attaches to the characters of these men...and that he will thus be relieved from the painful duty of making examples of those who...have rendered the property and lives of peaceable citizens insecure, and reduced society to the condition of lawlessness and violence." Polk indicates his own reluctance to make such an offer to deserters but is willing to accede to the wishes of those above him in hopes of finding a few more men to fill the ranks of an army running short of soldiers. Item 25. $3,000.

Move forward a year to February 11, 1865, and now the situation for the South was totally desperate. Item 24 is headed Certificate of Medical Examination of Slaves. By this point, a desperate Confederacy was conscripting the very people whose freedom depended on the Union defeating it. It was issued by the District of Mississippi's Medical Board for the Examination of Conscripts. This one attests that "Tom," age 39, is "is capable of performing field labor, and consider or pronounce him sound in mind and body except a bad set of teeth." Naturally, slaves were not going to made soldiers. They would not be given guns for obvious reasons. Rather, they were conscripted to do work such as building fortifications and moving supplies. $1,500.

Item 117 is a notable issue of the Analectic Magazine, dated November 1814. It contains the first magazine printing of the nation's National Anthem, the Star Spangled Banner. It had already appeared in several newspapers, but nothing more lasting than that. The editor explains while the words have appeared in newspapers, "...they may still, however, be new to many of our readers. Besides, we think that their merit entitles them to preservation in some more permanent form than the columns of a daily paper." As with the newspaper printing, the Analectic Magazine does not give the author's name, but explains, "He watched the flag at the fort through the whole day with an anxiety that can be better felt than described... In the night he watched the bomb-shells, and at early dawn his eye was greeted by the proudly-waving flag of his country." The British had failed to take Fort McHenry. However, if you are looking for the words "Star Spangled Banner" in this article, you will be disappointed. It appears nowhere. That name came later. At this point, the poem/song, was still titled The Defence of Fort M'Henry. $850.