A Polar Catalogue from Aquila Books 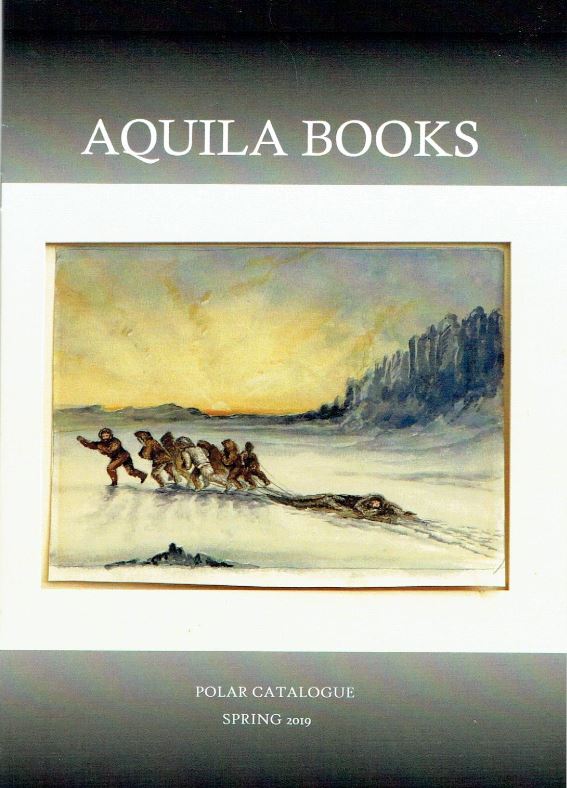 Aquila Books has issued a Polar Catalogue Spring 2019. Even the poles have springtime, though it is not a time for shirtsleeves or filling the pool. However, the title more likely refers to spring in Aquila's balmy hometown of Calgary, Canada. This catalogue includes many of the major works of polar exploration along with numerous others more obscure to those not polar collecting specialists. Most refer to the Arctic or northern polar area as most historic expeditions headed toward this pole. Nonetheless, there are several items pertaining to the less frequent travels to the far south. Here are a few selections to be found in this polar catalogue.

One of the highlights of Arctic polar exploration was the attempt to reach the North Pole. It took a lot of effort and many failed attempts before finally being achieved. Credit for being first there generally goes to Admiral Robert Peary of the United States in 1911. Peary's record was challenged in his time by the claims of Frederick Cook who said he reached the pole in 1908, but his claim has long since been discredited. More recently, some scholars have challenged whether Peary actually reached the North Pole, but we will leave that issue for another day and go along with the original consensus crediting him. However, it should be noted that Peary did not reach the pole alone. He was accompanied by four Inuit natives and Matthew Henson. Henson's participation was particularly notable as that was a time when there was enormous discrimination against African Americans, and many believed they were incapable of such accomplishments. Nevertheless, when Peary chose those he felt best suited for the final assault, he thought it was Henson and the natives who were most qualified for the task. Item 37 is A Negro Explorer at the North Pole by Matthew Henson, published in 1912. Peary came home to great acclaim, and you would think that Henson would have achieved some of that and his book would have become a bestseller. Neither of those was true. Racism was too ingrained at the time. Henson was largely ignored, his book sold few copies. Henson had traveled with Peary on all but his first Arctic exploration, so it is not surprising that he would have great faith in the former's ability to survive the harsh conditions at the most critical of times. Priced at $1,200 (note: prices here are given in U.S. dollars, but the catalogue also provides them in Canadian dollars and British pounds).

The greatest of Arctic searches was that for Sir John Franklin's expedition, which headed for the Arctic of Northern Canada in 1845, in search of the Northwest Passage. It never returned, no one survived. They ran out of food and supplies, their ship frozen into the polar sea north of the Canadian mainland. They attempted to escape by land, but all starved or froze to death without finding rescue. When nothing was heard from Franklin for three years, concerns began to mount and a large number of search and rescue missions were sent out over the coming years. Most were sponsored by the British government, but the Americans also attempted as did several private parties. By 1857, the British government was ready to throw in the towel. Lady Franklin was not. Item 29 is a second edition of Lady Franklin's plea, A Letter to Viscount Palmerston, K.G. from Lady Franklin, published in 1857. Palmerston was Prime Minister of the U.K. at the time. The letter was written and published by Mrs. Franklin in hopes of gaining the Prime Minister's sympathy with the cause of continuing the search. This second edition includes a folding map not present in the first. Despite the lack of continued support for additional expeditions from the government, there would be another private one, which would result in learning for certain of Franklin's unfortunate fate. $8,800.

While there was fairly solid evidence that Franklin and his men had not survived earlier, their fate was not conclusively determined until a private expedition sponsored by Lady Franklin and headed by Captain Francis Leopold McClintock set out in 1857. McClintock had been in Franklin searches as far back as 1848. He focused his search in an area where John Rae had heard of Franklin's outcome from Inuit natives in 1854, though many discounted Rae's report. McClintock spoke with the Inuit who told him the men had been forced to abandon the ship and head south on foot, but starved on an island before ever making it back. He also discovered a note hidden beneath a cairn from one of the crew saying that Franklin had died while still on board the ship and that the others headed south on foot. They also discovered a few bodies and artifacts. McClintock headed home in 1859 to report on the fate of Frankin's men. He recounts it in his book, published in 1859, A Narrative of the Discovery of the Fate of Sir John Franklin and His Companions. Item 52. $600.

Here is a remarkable Arctic item. It is a collection of five pencil sketches by George Back. Back participated in several Arctic explorations, including two led by the aforementioned Franklin. Fortunately, neither was Franklin's final journey. This expedition, commanded by Franklin, took place from 1819-1822. Rather than being a sea journey, this was overland. It was part of a search for the Northwest Passage in two parts. A sea journey was headed up by William Edward Parry. Franklin's crew went overland, from Great Slave Lake along the Coppermine River to the Arctic coast. From there they were to explore the coast, searching for a Northwest Passage. Unfortunately, almost everything went wrong. Supplies were short, expected cooperation from natives and fur trading companies was not forthcoming, weather was unexpectedly harsh, and as a result, game was scarce. They made it to the sea and surveyed about 500 miles of shoreline before curtailing the mission and making a mad dash south across uncharted territory. Half of the 22 men died of starvation. While locals accused Franklin of being ill-prepared, at home he was considered a hero for surviving such horrible conditions. Franklin was rewarded with several more missions and Back, too, would be appointed to head two missions a decade later. One took him up the the Great Fish River, ironically, in search of a different lost explorer, John Ross. They received notification while preparing that Ross had been found, but they proceeded up the Great Fish River, since renamed the Back River, for exploring purposes anyway. These drawings go back to the earlier ill-fated mission with Franklin, but during its beginning, more favorable days, while traveling through forests and along the Coppermine River. Item 4. $20,000.

Here is an uncommon Arctic book, The Soviet Arctic, published in 1939. While written and published in the Soviet Union, it is in English, so obviously meant for foreign consumption. It is a combination account of Soviet foreign explorations and development with propaganda. Aquila notes that some of the photographs appear to have been doctored. Item 73. $320.