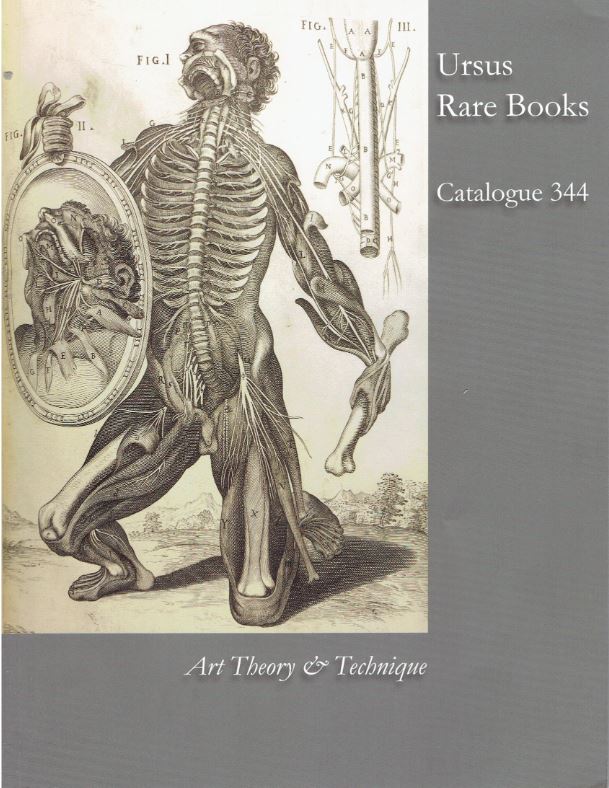 Ursus Rare Books has published their Catalogue 344, Art Theory & Technique. It is divided into four sections, I Model Books & Artistic Instruction, II Colour Theory, III Architecture & Perspective, and IV Art History. Don't look for much in the way of contemporary books here, nor even many from the 20th century. This is primarily quite a bit older, works from an era when art was rapidly evolving from two-dimensional ancient Egyptian style renditions to works far more life-like in appearance. Perspective matters. And, if you are wondering about that very strange image on the cover, that will be explained better by some of the material inside. Here, now, is a look.

We begin with one of the earliest model books, Enchiridion artis pingendi, fingendi & sculpendi (manual of fine arts, creativity and sculpting), by Jost Amman, published in 1578. Amman was known as one of the most expressive of woodcut artists in the 16th century. Following the tradition of meticulous engraving of Durer, his work was regularly sought out by contemporaries. Over 540 of his prints are known. Ursus explains that "the woodcuts elegantly depict figures from antique mythology, costume designs, tournaments with swords and spears, horses, armorial escutcheons, Turkish soldiers, dancing couples, allegorical characters, contemporary scenes from literature and/or theater, and superb 'models' intended to aide painters, designers, engravers and copyists of the day." The cataloguer also notes that the book is "excessively rare." Copies were heavily used so that the few survivors are often in seriously defective condition. This copy is complete. Item 1. Priced at $27,500.

Now for that strange-looking picture on the cover. It comes from an anatomical work published in 1741, Tabulae Anatomicae a Celeberrimo Pictore Pietro Berritino Cortonesi (anatomical plates from celebrated painter Pietro Berritino Cortonesi). The painter is also known as Pietro da Cortona, a great Italian painter from the baroque period. The text was provided by Cajetano Petrioli. This folio book contains 27 full-page engraved anatomical plates. If it feels somewhat macabre, its from the depiction of anatomical features combined with life-like poses. The skeletons and innards are alive. Indeed, they are elegant, classic poses sited around columns, arches, and other classical architectural features. Cortona was one of the greatest Italian artists of his time, but the date of this book is not indicative of his time. These drawings were created around 1618, possibly for some other, unpublished work. They sat around for over a century before published by Petrioli. Ursus notes that Petrioli has added a vignette in the lower left of the title page depicting a man receiving a transfusion from the carotid artery of a lamb to a vein in his left forearm. These animal-to-human transfusions were tested in 1667, but as you might imagine, did not turn out so well. It was not until the 19th century that human-to-human transfusions began to be tested, and their success was random as physicians were not aware of the differences in blood types yet. Item 5. $25,000.

Here we take the anatomical drawings one step further. Item 9 is Ein Anatomischer Totentanz (an anatomical Dance of Death) by Albert Hasselwander, published in 1926. This odd book was also prepared for artists which includes a long preface of the history of the "Dance of Death. It contains 25 photographs of nudes in various dramatic positions, with almost photographic like drawings by Fritz Stell of skeletons in the exact same poses on the facing plate. Says Ursus, "Viewed artistically, the contrast of the nude photographs with their corresponding skeletons elicits an amusing but also disturbing response in the onlooker. Certainly, 'artistic instruction' was the intention of the author Hasselwander, and yet, beyond the moralistic message inherent in Dance of Death works, Ein Anatomischer Totentanz evokes a Weimar Republic-like luridness and kinky voyeurism." The belief that the depictions were made for reasons other than "kinky voyeurism" is based on who the author was. Dr. Hasselwander was a professor of anatomy at a German university who wrote a couple of anatomical books. Item 9. $9,500.

If you want to learn to draw, who better to have as your teacher than the master, Leonardo da Vinci? He may no longer be available for personal instruction, but his book is, Trattato della Pittura di Leonardo da Vinci (treatise on painting of Leonardo da Vinci). This is a first edition, published in 1651. It is like the Cortona book in that it was first published over a century after it was created, da Vinci having died in 1519. Ursus quotes Kenneth Clark on this book, who described it as "the most important document in the whole history of art." Da Vinci never actually wrote a book on painting. It comes from notes da Vinci kept. His student, Francesco Melzi, compiled his notes, but they were not printed. Melzi's compilation was passed around in manuscript form. In 1740, Cardinal Barberini began a more detailed study of Leonardo's writings, though he, too, did not publish the outcome. It finally reached the press with this edition edited by Raphael du Fresne. It includes drawings now lost made by the artist but preserved in copies by Melzi. Ursus notes, "It remains a key source of Leonardo's writings on perspective, proportion, colour, light and shadow." Du Fresne has added a biography of da Vinci and a bibliography of 35 books on art. This copy has been bound together with a 1651 edition of Della pittura and Della statua by Leon Battista Alberti, an earlier artist who was influential on da Vinci. Item 12. $19,750.

This one is particularly for Americans. Item 61 is Architectural Designs for Model Country Residences...Prepared expressly for persons who contemplate building, and artisans throughout the United States, by John Riddell, published in 1864. This is a rare and beautiful book of architectural drawings. According to Roger Moss in Philadelphia Architects and Buildings, "The successful architect John Ridell is best remembered for his Architectural Designs for Model Country Residences, a book written to prospective clients that - ironically - remains his chief monument. Illustrated with twenty lithographs in full colour, Architectural Designs is one of the handsomest American books of architecture published in the nineteenth century." This work was first issued in 1861, with the sheets reissued, as in this copy, in 1864. $17,500.