A Summer Catalogue from Zinos Books 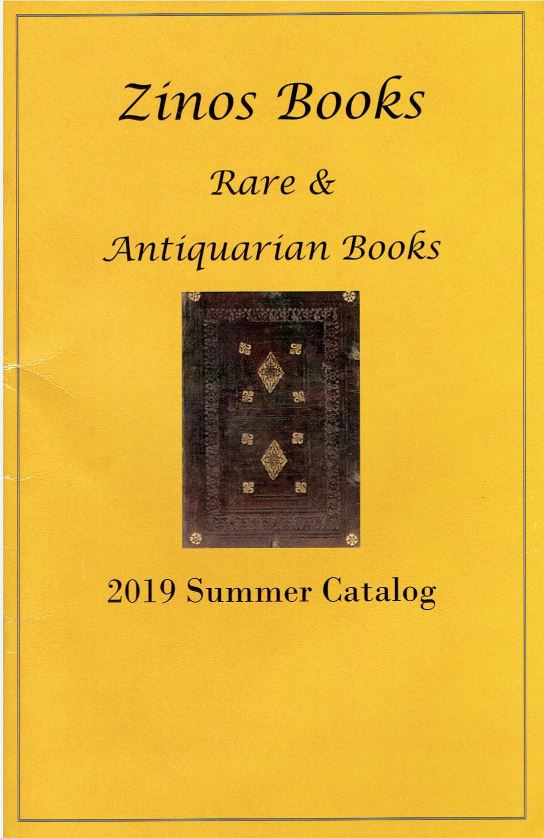 Zinos Books has issued their 2019 Summer Catalog of rare and antiquarian books. This contains primarily European material, although America sticks its head up on occasion. There are many works in Latin, but that is reflective of much of the material being very old. French in particular, but several other European tongues, including English, are to be found. Topics vary widely, the earlier books usually religious in nature, but there are travels and science and medicine also to be found. The catalogue is divided by century with all from the 16th to the 21st represented. Here are a few examples of what can be found.

We will begin with an item that ties France to America. It recounts the visit of a young Frenchman to America in 1840. He took time off from his studies for an adventure, one worthy of a book. He left France in November of 1839, arriving in New Orleans in January. From there he proceeded up the Mississippi River to St. Louis. He hooked up with a few French companions and headed up the Missouri River to Osage country. Victor Tixier then spent his time as a guest of the Osage Indians, learning their ways and all about their culture. He accompanied them on a buffalo hunt in Oklahoma and eventually traveled as far as the Grand Saline in eastern Texas. He returned home later that year and began work on his book, Voyage aux Prairies Osages, Louisiane et Missouri, 1839-40, published in 1844. In it, Tixier provides a detailed and objective description of the Osage, their villages, homes, customs, food, entertainment, medicine, political structure, religious beliefs, hunting and fishing, and warfare with the Pawnee. He also visited Pierre Papin's trading post on the Neosho River and wrote about the life of a post trader. Item 40. Priced at $3,000.

Next we have Praxis rerum criminalium, praetoribus, propraetoribus... a 1570 handbook of criminal law. It was written by Josse de Damhouder and is considered a classic of 16th century criminal law and procedure in the Netherlands. Some of it would be dated for today's legal practice such as an extensive section on witchcraft. Damhouder considered it a real and serious crime, believing torture was a reasonable method of eliciting the truth from witches. However, he was also somewhat humanitarian, saying torture should not be used with minor crimes. Damhouder can't be held accountable for everything here anyway since most of it was copied from other writers. However, none of this should slow you down if interested in this book, even if you don't read Latin. What is unusual about it are the many woodcuts, 73 of them depicting various crimes, tortures, and punishments, including such things as murder and adultery. Item 11. $3,500.

This item certainly contains its share of irony. It is a pamphlet printing an explanation by Pope Pius VII of his policy towards Napoleon, Allocutio habita in consistorio secreto feria quarta die XXVI Junii MDCCCV (confidential address on June 26 1805). In his confidential address, Pius justifies his friendly relations with Napoleon, whose behavior was already making church leaders uncomfortable. The Pope had gone so far as to crown Napoleon emperor the previous year. A bit of history will explain this. During the French Revolution, the Catholic Church had been marginalized, much of its lands taken, priests often badly mistreated. Napoleon promised something of a return to normal times for the church. The Concordant of 1801 had officially restored some of those rights, while also serving Napoleon's interests in gaining power. By 1805, Napoleon was encroaching more on church authority, leading Pius to issue this statement justifying his prior actions. Referring to Napoleon as "Most dear son in Christ, Emperor Napoleon," the Pope describes the benefits to the church of their rapprochement. Seminaries are functioning again, missions are working, charitable organizations are back in operation. The warm relations would not last much longer. Pius undoubtedly wanted to keep this memo permanently secret in the days to come. Napoleon would occupy church territories, leading to an exchange of angry letters between the two. In 1808, he occupied Rome, the next year annexed it. The Pope responded by excommunicating Napoleon. Napoleon countered by kidnapping the Pope and placing him under house arrest. That condition remained until Napoleon was defeated at war and sent into exile. Item 37. $500.

Next is one Zinos describes as a "quaint book." It is titled The Young Astronomer's Assistant, and Countryman's Daily Companion...by William Hitchman, Shoemaker, of Poulton, near Cirencester, published in 1755. In other words, Hitchman was not a notable or professional astronomer, though undoubtedly he could make better shoes than Galileo. This book provides weather forecasts for each month in the form of poems, measurements for timber, land surveying techniques, rates for plasterers' work, eclipses for the next seven years, and how to find the date of Easter all the way until 1899. It contains several engravings. Not surprisingly, this is an uncommon book, with only four recorded copies. Item 30. $2,500.

Item 41 is a manuscript letter written in 1878 by Admiral William Edgar Le Roy to a junior officer, Commander F. J. Higginson. Le Roy was a Civil War hero and at this point was near the ending of an almost 50-year naval career. Le Roy was commanding the European squadron, while Higginson was commanding a ship operating off the Greek coast. In his letter, Le Roy provides Higginson with some good advice. At the time, there were problems (as always) between the Greeks and their Ottoman Turk rulers in the port city of Volos, and on top of that, the Greeks were angry with Protestant missionaries who were proselytizing them. They became abusive toward the missionaries. Higginson wanted to intervene to protect them. Le Roy warns Higginson this is not such a good idea. He explains that such an intervention would be interpreted by the Turks as an encroachment on their territorial sovereignty. Sometimes it's better to just mind your own business. $500.