Top of the Line Books from Whitmore Rare Books 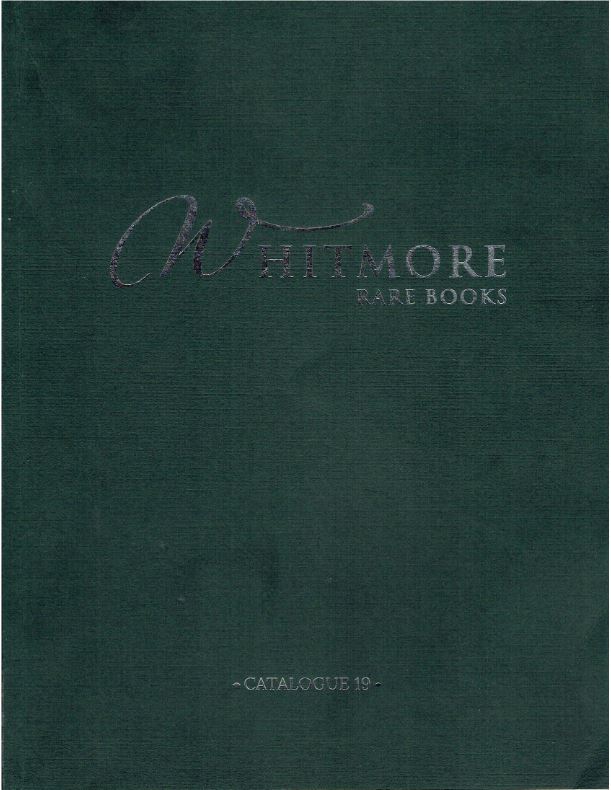 Whitmore Rare Books has published their Catalogue 19. You will find it a mix, many novels, scientific works, children's books, theology, ancient philosophy and more. Most items are books, with an occasional exception. Whitmore specializes in important books in top condition. If you are looking for the best, look here. These are a few samples.

We will begin with an important work from a remarkable woman, Angelina Grimke. The title is Letters to Catherine E. Beecher in Reply to an Essay on Slavery and Abolition, Addressed to A. E. Grimke, published in 1838. We should note here that Ms. Beecher spelled her name "Catharine" and the cover has this correct, but the title page has her name misspelled. Angelina was the daughter of a wealthy South Carolina plantation owner and yet her principles led her to be an ardent abolitionist. She published a book of her views which was so unpopular back home that she and her like-minded sister deemed it wise to move north. Catharine Beecher was also against slavery, but was more of a gradualist when it came to ending it. Ms. Grimke was also an ardent advocate of equal rights for women. Beecher was a strong promoter of women's education, but even there, it was more to prepare them for jobs as teachers than for an equal place at the table with men. In 1837, Beecher published a book in response to Grimke's first book, expressing her position of gradual elimination of slavery and the role of women in public discourse. Grimke's answer expresses her view that the Constitution gives people the "blessings of liberty," and "[t]he slave laws are violations of these fundamental principles...I have found the Anti Slavery cause to be the high school of morals in our land... Human beings have rights, because they are moral beings... These rights may be wrested from the slave, but they can not be alienated..." The belief that humans have inalienable rights leads Grimke to her next conclusion - "Now if rights are founded in the nature of our moral being, then the mere circumstances of sex does not give to man higher rights and responsibilities, than to women..." At least abolition had a reasonable following in the north. Women's rights had little anywhere, Grimke making herself even more controversial. It should be noted that Catharine Beecher's sister was far stronger in her anti-slavery views and would become a major voice of the movement. She was Harriet Beecher Stowe. Item 33. Priced at $10,500.

Here is what Whitmore describes as "likely the most widely-read Spanish language novel aside from Don Quixote." The book is Cien Anos de Soledad (one hundred years of solitude), the author Noble Prize for Literature winner Gabriel Garcia Marquez. It follows the lives of one family in the fictional rural Latin American town of Macombo, from the town's growth and prosperity to its later downfall. Naturally, the characters change from the beginning to the end as he depicts the lives of several generations of the Buendia family. Item 28 is a first edition, first printing of the novel from 1967. It was printed in 8,000 copies, quickly sold out, and was followed by three more printings that year. It has since sold over 30 million copies. This first printing has the unique first printing cover art, featuring a ship and three yellow flowers. Garcia Marquez did not like this and had the cover art changed before the following printings. $3,500.

Whitmore also has a copy of Garcia Marquez's classic in its first English language edition, appropriately titled One Hundred Years of Solitude. This edition was published in 1970. Item 29. $2,250.

Charles Lyell receives hardly the recognition of his slightly younger contemporary scientist, Charles Darwin, and yet his theory was almost as important as Darwin's, and was essential to the latter discovering his theory of evolution. Lyell was to geology what Darwin was to biology. The two were friends and Darwin ran his ideas past Lyell, though his religious beliefs made it difficult for Lyell to accept them. Lyell made a radical discovery that inspired Darwin. He saw how slowly geological change takes place and reasoned that has always been so. There was no sudden earthly creation 5,000 years ago. It developed as it is through gradual change. Darwin looked at what he had learned as the naturalist on a journey to South America, seeing slight adaptations between animals at different locations isolated from each other, and concluded this had happened slowly as well. Voila! Evolution. Lyell's discovery that the earth did not appear suddenly led to Darwin concluding the same about animals. Item 44 is Lyell's Principles of Geology, Being an Attempt to Explain the Former Changes of the Earth's Surface, by Reference to Changes Now in Operation, three volumes published 1830-1833. Item 44. $12,500.

Next we have a remarkable letter, written by Jack Kerouac to his friend Ian MacDonald in 1943, when he was 21 years old. Kerouac was briefly hospitalized for a mental condition when he didn't adapt well to being in the Navy. That is when he wrote this letter, revealing in many ways. Writes Kerouac, "I have been defeated by the world, with considerable help from my greatest enemy, myself, and now I am ready to work. I realize the limitations of my knowledge and the irregularity of my intellect. Knowledge and intellection serve a Tolstoi -- but a Tolstoi must be older, must see more as well -- and I am not going to be a Tolstoi. I will be a Kerouac, whatever that suggests. Knowledge comes with time. As far as creative powers go, I have them and I know it." He goes on to tell Ian that he needs to change some things but not all - "I must change my life now, I have reached 21 and I am in dead earnest about all things. This does not mean I shall cease my debauchings; you see, Ian, debauchery is the release of man from whatever stringencies he's applied to himself." Inspiration is a great excuse for debauchery. He also speaks of his desire to find the perfect woman and of a broken heart he received at the age of 16. Finally, after signing off "Whimsically, Jack", he writes, "Sorry! - I have grown to hate rhetoric - or attempts at it - why don't men devise new ways of communicating?" It's a shame, either that or a good thing, that Kerouac did not live to see such new ways of communicating as social media, text messaging, and emojis. Item 40. $19,500.