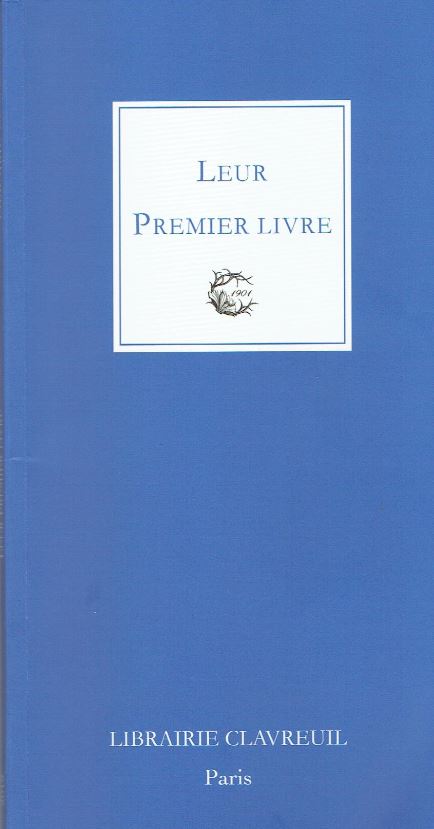 Librairie Clavreuil of Paris has issued a catalogue entitled Leur Premier Livre. That translates to "Their First Book," and it refers to the authors not the owners. It is a collection of mostly first editions of first books by notable authors. The subject matter varies widely, containing literature, poetry, science, medicine, history, politics, and more. Most, though not all books are in French, a few being written in English and other European languages. The catalogue itself is entirely written in French. Prices are not specified. Here are a few selections from this catalogue of first books.

Francois-René Vicomte de Chateaubriand would die as one of France's most acclaimed writers. He was little acclaimed at the time he published his first book. Born in 1868, he trained to be a naval officer, then a priest, joined the army, became tired of it, and moved to Paris. While a royalist, he became sympathetic to the ideals of the revolution. However, he opposed the violence, so in 1791, he sailed to America, seeking a freer and simpler life. He traveled to the western regions of the young country, spent time living with the Indians seeking an ideal life. Evidently, it didn't work out quite that way so in 1792 he returned home. He joined royalist forces, was seriously injured, and in 1793, as the Reign of Terror began, he managed to escape to London. He remained there until the amnesty of 1800 allowed him to return to France. During his years in England, Chateaubriand began his serious career as a writer. In 1797, his first book was published, item 11 being a first edition of Essai Historique, Politique, et Moral, sur les Revolutions Anciennes et Modernes, Considerees dans leurs Rapports avec la Revolution Francoise. In it, Chateaubriand looks at ancient and modern revolutions and compares them to what was going on in France. He opposed the conservatives of the time, though Chateaubriand would later fully embrace France's return to a monarchy. This book was not a best-seller and did little to build his reputation, but it would be followed by some of the romantic novels from which his career would blossom. He would serve in political office after the Restoration and become the renowned Romantic writer he is today. His best known work, his Memories from Beyond the Grave, would not be published until over a half century later, appropriately enough, after he died.

Next we have one that will appeal to Americans, both for its language (English) and its subject. Michel Guillaume St. Jean de Crevecoeur was born in France in 1735. In 1755, he immigrated to America, serving on behalf of the French during the French and Indian War. Despite that loyalty, he stayed on after the French defeat, settling in the British colony of New York. He purchased a large farm in upstate New York where he prospered. He also became a naturalized citizen of the colony, adopting the more American sounding name of John Hector St. John. However, in 1779, he returned to France, he being an unusual combination of French and British in Revolutionary America. He next moved to London, and that is where he wrote this book, Letters from an American Farmer: Describing Certain Provincial Situations, Manners, and Customs, Not Generally Known; and Conveying Some Idea of the Late and Present Interior Circumstances of the British Colonies of North America. It was published in 1782. Perhaps he was humoring the English by calling them "British colonies," but technically they could still be so called as the Treaty of Paris had not yet been signed. Crevecoeur also used his English name, John Hector St. John, for this English book. The book brought Europeans one of their first extensive looks at America, Crevecoeur writing about the entire country with much about its people, customs, infrastructure, and such. His writing was very much complimentary of Americans and their free institutions, encouraging many English citizens to immigrate to the new land, as he once did. Crevecoeur was appointed French Consul in 1783 and returned to New York. He remained in America until 1790 when he was recalled to France. Item 15.

Carlo Lorenzo, born in Florence in 1826, by the 1840s had become engaged with literature, theater, and politics. He participated in the First Italian War of Independence, and was an active promoter of the unification of the Italian states. He became a journalist and was a founder of several satirical newspapers. While originally using the Lorenzo name, in 1856 he adopted the pen name for which he is better known, Carlo Collodi. He would again go to war and settle down to write novels for adults. In 1856, he also published his first book, Un Romano in Vapore. Da Firenze a Livorno (A novel in steam from Florence to Livorno). It celebrated the opening of a railroad line between the two cities. It describes the technological advances highlighted by this new mode of transportation. During the 1870s, Collodi turned his attention to writing a different kind of book, stories for children. He wrote several of these, but the one you know is his story of a wooden marionette by the name of Pinocchio, published in 1883. Item 13 is a copy of his first, "steamy" novel from 1856.

Like Crevecoeur, we will now take another journey back to America. Unlike Collodi, this author's first book is not an obscurity. Rather, it is by far his most famous. Most every American school child read it for several decades, generally for the wrong reasons. In 1951, J. D. Salinger published his first novel, The Catcher in the Rye. It is one of those coming of age books, the protagonist an unhappy prep school student with whose feelings many in their teen years could easily identify. However, what made the book particularly exciting to adolescents of the time was Salinger's willingness to use bad language and talk of sex, as they did, but only when their parents weren't around. Item 55.