California and the West from John Windle Antiquarian Bookseller 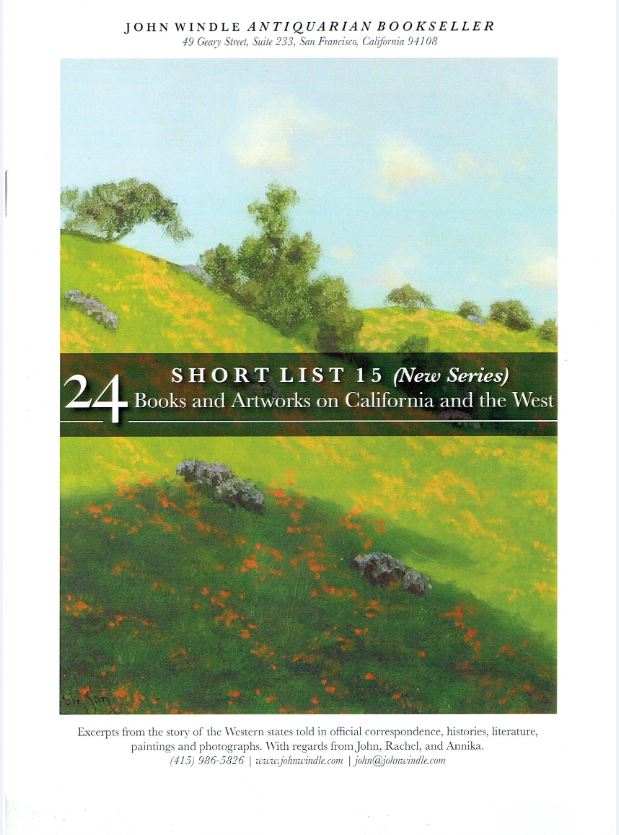 California and the West.

John Windle Antiquarian Bookseller has issued his 15th Short List, this one entitled Books and Artworks on California and the West. This material depicts the Golden State from a different time, before it was the largest state, sometimes before it even was a state, occasionally before it was even a possession of the United States. There was once a time when California was a sparsely inhabited place. The beginning of the end of that era started with the Gold Rush, a process that has continued unabated for the past 170 years. Here is a look at a few samples of the different aspects of California as it has evolved over the years.

We will begin with an account of California in its early days, while still a part of Mexico. The author was José Bandini, a Spanish sea captain who settled in California around 1818. Item 2 is a manuscript English translation of Bandini's description, originally written in 1828, likely made between 1838-1846. It would have been taken from one of the handful of manuscripts in Spanish then in circulation. The heading is Description of Upper California. It is an extended version of a letter he wrote to a British vice-consul who requested it. Windle notes that the "highly-detailed report describes the government, presidios, missions, Indians, settlements, trade routes, revenue, flora and fauna, and topography, and gives recommendations for its future development." Bandini was none too favorably inclined toward the Indians, whom he did not consider trustworthy or grateful, but then again, he was not particularly complementary toward the Spanish-Mexicans who migrated north, considering them less than industrious workers. This translation was likely made for Thomas O. Larkin. Larkin was an early American settler who was the first and only American consul to the California Republic and a signer of the original California Constitution. Larkin promoted the desirability of settlement of this new territory to authorities in Washington and this account would have provided ammunition for his cause. Despite its importance, Bandini's manuscript was not published until 1951, when an edition in Spanish and English was printed in 400 copies by the Friends of the Bancroft Library. Priced at $25,000.

Larkin wasn't the only person promoting settlement of California in the days after it was taken over by the U.S. On the other side of the continent, J. Morrison Harris was promoting the territory to members of the Maryland Historical Society. Item 6 is A Paper Upon California; Read before the Maryland Historical Society. The year was 1849. Harris noted California's advantageous geographic position, foreseeing the transcontinental railroad, then just a dream two decades away, and California's role as the gateway to the Orient. He predicted California would become the new Constantinople or Lisbon, obviously major ports of commerce in that day. This being the era before the Panama Canal, shipping to the east coast of America required an enormously long journey, to be greatly reduced by California and its terminus of the railroad. $175.

Here is a Californian who lived in the state long before the above named gentlemen, a life long resident of the place where born. It still lives today, though an estimated 1,700 years old. Okay, this is not a person. The Grizzly Giant is a tree, a sequoia 209 feet tall. The Giant is a resident of Yosemite National Park. Item 15 is a photograph of the Grizzly Giant taken circa 1908-1917. The photographer was Harold A. Parker, who operated a studio in Pasadena from 1903-1930. The studio's stamp reads "H. A. Parker, Fotografer." Parker passed on in 1930, but the Grizzly Giant still thrives today, looking much as it did a century ago. $500.

You will find some photographs of Parker's studio in the Huntington Library, which provides a perfect lead in to this next photograph. It is one of Collis Potter Huntington, the uncle of Huntington Library founder Henry E. Huntington. Both Huntingtons were wealthy railroad magnates. Collis' most significant achievement was as one of the four founders of the Central Pacific Railroad. The Central Pacific was created to build the western portion of the first transcontinental railroad, the Union Pacific handling the other half. They met at Promontory Point, Utah. Collis Huntington would go on to be involved with several other railroads, most notably as a founder of the Southern Pacific. Huntington died in 1900, and this photograph was evidently taken near the end of his life. The photographer was William Keith, a painter as well as photographer. Item 11. $1,500.

Not all Californians are nice people. Take James Gilbert Jenkins, for example. Actually, it's unfair to blame California for producing Jenkins. He was born in North Carolina, later working his way across the country, killing lots of people along the way. This book contains his gallows confession: Life and Confessions of James Gilbert Jenkins: The Murderer of Eighteen Men. Containing an Account of the Murder of Eight White Men and Ten Indians; Together with the Particulars of Highway Robberies, the Stealing of Several Horses, And Numerous Other Crimes, Committed in Missouri, Illinois, Indiana, Virginia, Arkansas, Tennessee, Texas, New Mexico, Nebraska and California: as Narrated by Himself...while in Jail under Sentence of Death... At least in his home state of North Carolina, he wasn't such a bad guy. Jenkins narrated his grisly tale to Napa County Sheriff C. H. Allen, who made the most of it by publishing this book in 1864. Not coincidentally, 1864 was also the year in which Jenkins died. The law finally caught up with Mr. Jenkins when he offed one Patrick O'Brien, who made the mistake of hiring Jenkins as a helping hand. He obviously didn't check Jenkins' references (not that they could have talked). You can find a couple of explanations online as to why Jenkins murdered O'Brien. One is that he was messing around with O'Brien's wife who encouraged this particular outcome. The other is that Jenkins wanted to marry O'Brien's 14-year-old daughter, but her father said no. Whichever doesn't really matter. Jenkins required little excuse for murdering someone. He expressed little remorse in his confession, regretting only that he got caught. Item 24. $375.