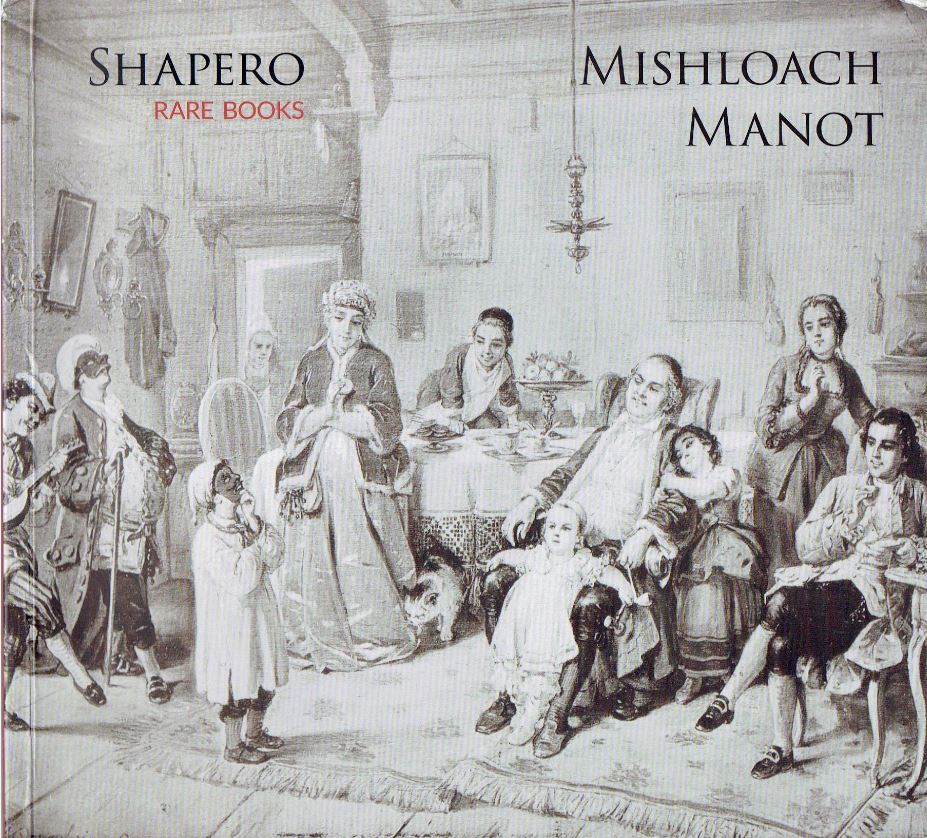 Shapero Rare Books has issued a catalogue entitled Mishloach Manot. If you understand the meaning of that title, you are likely a collector of the material found within. This is a collection of Judaica. Misloach manot is a tradition of bringing gifts of food to friends and neighbors at the holiday of Purim, a festive holiday. It is taken from the Book of Esther. That is the story of how Queen Esther saved her people. She was the secretly Jewish wife of King Ahasuerus, a decent guy whose advisor, Haman, planned to kill all the Jews in his kingdom. Esther revealed Haman's plot to Ahaseurus, who ordered Haman to be the one executed. The descendants of Esther's people celebrate her heroic deed to this day. All of that said, this catalogue is not limited to the festival of Purim. It covers Judaica, including Jewish holidays, in all its aspects. However, the contents are a feast for the eyes and the mind. Here are a few samples.

In keeping with the Purim theme, we will begin with a Megillah, or Esther scroll. The Book of Esther is traditionally written on a scroll, and sometimes those scrolls can be highly decorative. Shapero has several such scrolls in this catalogue. Item 3 is one. This one is Balkan in origin, from the early 19th century. It is housed in a highly decorative silver case. The Book of Esther is unusual in that it is the only book of the Hebrew Bible other than the Song of Songs not to mention God. The scribe for this scroll has cleverly found a way around this. The scribe has highlighted letters from the text in bold so as to spell out the various names of God. Item 3. Priced at £9,500 (British pounds, or approximately $12,276 in U.S. dollars).

Next we have another book associated with a specific Jewish holiday. This one is for Passover, celebrating the escape of Israelites from bondage in Egypt. The book, known as a Haggadah, recounts the story of the Exodus. It is read at the Passover Seder, a festive meal and story-telling commanded by the Bible at Passover. Item 8 is The Haggadah, one of the most notable of all, created by Polish Jewish artist Arthur Szyk, edited by Cecil Roth, and published in 1940 (though dated 1939). Szyk's artistic style was classical, similar to that of Renaissance era illuminated manuscripts. Nevertheless, current politics were plainly in Szyk's view at the time. Indeed, he became notable as a caricaturist during the Second World War, doing much propaganda work on behalf the Allies. Szyk had moved from Poland to France in 1921, but shortly after he began work on his Haggadah in 1932, Hitler came to power in nearby Germany. From a safe distance, he witnessed what was happening. Fortunately, Szyk moved to London in 1937 to complete the Haggahdah, so he remained at a safe distance when Germany invaded France. After its completion, Szyk moved on to America where he remained the rest of his life. His political views take shape in some of his illustrations, with the wicked son in the Haggadah taking on the appearance of Hitler. In his original presentation, Szyk used the heads of Goebbels and Goring in his illustrations, with swastikas and snakes making their evil appearances, but the publisher toned down the political views, requiring they be removed. This copy has been signed by Szyk and Roth. £37,500 (US $48,489).

Item 26 is a guide to the Holy Land a long time ago, but historically quite recent. It's a very old land. The title is Sefer Hibat Yerushalayim (book of the love of Jerusalem). The writer was Hayim (Chaim) Horowitz and the book was published in 1844. It is a guide not only to Jerusalem but to the rest of the Land of Israel, its towns, cities, geography, and significant grave sites. The commentary focuses on places of spiritual and religious significance. Horowitz prepared his book for the edification of Jews in the Diaspora. He wanted fellows of his community to understand the historic importance of the land and build their personal connections to it. This is one of the earliest books printed in Hebrew in Jerusalem. £2,750 (US $3,556).

It literally took a couple thousand years, but Israel finally regained its independence from foreign rule in 1948. Item 45 is a copy of the newspaper Yom Hamedinah ("The Day of the State"), dated May 14, 1948. The headline announces, "The Nation Proclaims the State of Israel." May 14 was the last date of the British mandate, a date set by the British after the United Nations had approved a plan for partition the previous November. On May 14, Israeli leaders made their declaration of independence described in this paper. The following day, several Arab nations went to war with the new nation, a conflict still unresolved today. This newspaper also proclaimed an end to the "White Paper Laws" that prohibited Jewish immigration and noted that the Chief Rabbinate had authorized the mobilization of the population against attack, even though it would be the Sabbath. Yom Hamedinah was a one-time event, a joint publication of Israel's newspapers. This is the English edition. Most copies were printed in Hebrew, but this is the only copy in English that Shapero has been able to locate. £7,500 (US $9,698).

This is a printed exchange between two of the great minds of the twentieth century. This is a secular exchange. Both of the men were Jewish, but the topic is not theological. The title is Warum Krieg? (why war?). Good question. Einstein had been invited by the League of Nations to address any person on any subject. Einstein chose this subject, and for the recipient he chose Sigmund Freud. Einstein was more optimistic, promoting an independent judiciary to mediate conflicts. Freud did not disagree with that idea, but nevertheless believed there was no likelihood of suppressing man's aggressive tendencies, and war was the ultimate expression of that behavior. This exchange was published in 1933, the year after the League of Nations had put down the challenge, and by then, Hitler had seized control of Germany and the world was on the way to its worst war ever along with even greater atrocities committed by man on man. Freud understood human nature too well. Item 54. £2,500 (US $3,234).