European and Japanese Books and Ephemera from Jonathan A. Hill Bookseller 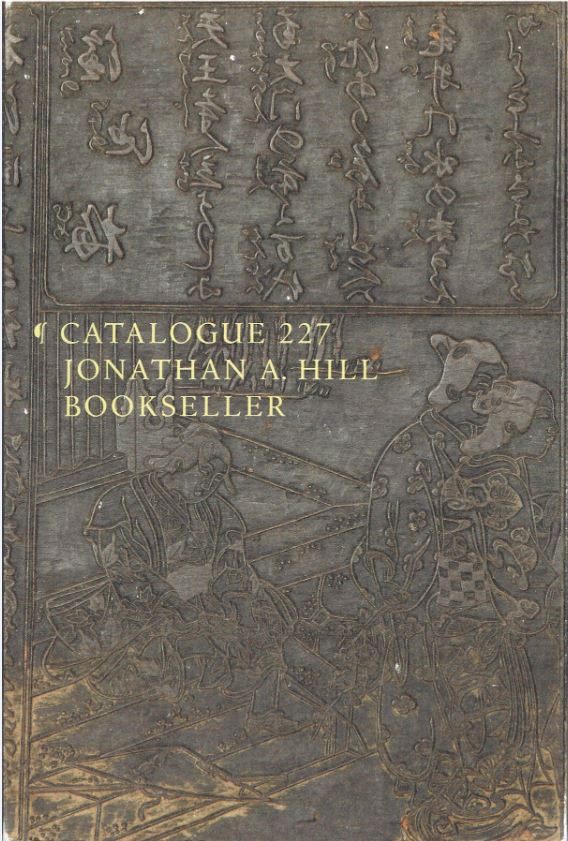 Jonathan A. Hill Bookseller has issued their Catalogue 227. It doesn't have a name, but it would be hard to provide one for a catalogue featuring two vastly different topics. So, to clarify, here they are. Part I: Science, Medicine, Art, Comets, Festivals, History, Manuscripts, Bibliography, & Literature. Part II: Japanese Books, Manuscripts, & Scrolls. Material in Part I is in various Latin based languages. If you are reading this, you undoubtedly speak at least one of them. Items in Part II are in Japanese characters. While reading Japanese is necessary for textual understanding, many of these, such as the scrolls, are more notable for their art, the work of skilled artists of centuries ago. Language is not required to appreciate them. Here are a few samples of what we found in this catalogue.

We will begin with one of those ephemeral items, a mounted photograph of great importance for collectors in the field of photography, with a strong aside for those focused on astronomy. The heading on the mount reads The Forty-Foot Telescope at Slough Photographed by Sir John F. W. Herschel. The photograph was taken on September 9, 1839, and those familiar with photography will recognize this as the year when this experimental process began to make its way into the public consciousness. Herschel, like his father, Sir William Herschel, was an astronomer, but his great scientific mind expanded to numerous fields. Earlier that year, he heard from a friend about Daguerre's newly developed process. It took Herschel but a couple of days to duplicate and expand upon Daguerre's work (as noted, Herschel was really sharp). He quickly developed a negative/positive process for creating images (he coined the terms "negative" and "positive" with regard to photography). The subject of Herschel's photography was his father's telescope. This 40-foot tall monster, which weighed over a ton, was the largest in the world. Sir William Herschel had been the first to discover the planet Uranus. None of these earliest of John Herschel's photographs have survived. Later that year, he became the first to make glass plates for the negatives, allowing him to create greater clarity on the positive images. None of these contemporary positives are known today either. However, some of the original glass negatives survived. In 1890, the best one of these was taken from an exhibit at the Science Museum and used to create 25 photographs. This is one of them. It is not the sharpest of photographs, but the best you will find. The glass negatives have now faded virtually beyond recognition. The mounting paper has been signed by two of Herschel's sons. As for his father's telescope, it had become unstable and was taken apart shortly after this photograph was taken. Naturally, it is the only image of it, along with being the first image of any scientific instrument, the earliest surviving image taken on glass, and the only surviving camera image taken by Sir John Herschel. This one of the 25 photographs is one that was kept by Herschel's family, and has come by direct descent through his family. Item 44. Priced at 25,000.*

This catalogue has a surprising number of publications about comets. Here is one of them from a master scientist, Galileo. The title is Discorso delle Comete di Mario Guiducci... published in 1619. Though Mario Guiducci, Galileo's student and assistant, is the stated author, the original manuscript shows that it was mostly written by Galileo. It was a response to a work by Jesuit Orazio Grassi. This came at a time shortly after the Church had outlawed the teaching of Copernicus' theory of a heliocentric universe. Grassi's work implied that theory was false, and while Galileo was warned not to defend it, he did, at least surreptitiously, choose to argue against Grassi's views. Actually, Galileo was wrong, believing comets were an optical phenomenon, but his argument here is based more on Grassi's not providing scientific backing for his theory. The debate continued in warring publications for a few more years until Galileo, feeling he had won the argument, stopped responding. Item 18. $40,000.

Here is another work on comets, Réflexions sur les Cometes qui peuvent approcher de la Terre, by Joseph-Jerome de Lalande. Lalande was a highly respected French astronomer, chair of astronomy at the College of France for 46 years. He or his staff just missed out on discovering Neptune. They noticed a slight change in position compared to nearby stars due to planetary movement, but misinterpreted it as being an observation error. Lalande wrote many works in the field, and his respect had the effect of causing a bit of a panic in Paris as a result of the lecture memorialized in this book. Lalande speculated on the slight possibility that planets might alter the path of a comet sufficiently to cause it to crash into the earth. Some people mistook this as a prediction and panicked. Item 32. $1,750.

It was one of the earliest of world's fairs and it was a smashing success. This was the Great Exhibition of 1851 which took place in London. Almost 14,000 exhibitors from 26 countries participated. Over 6 million visitors attended. A massive structure of steel and glass was designed to house the exhibition. The Crystal Palace would later be moved to a new site, but burned down in 1936. Unfortunately, the structure also contained wood. Competitions were held between the exhibitors and prizes awarded. Item 39 is the official account of the competitions: Exhibitions of the Works of Industry of All Nations, 1851. Reports of the Juries on the Subjects in the Thirty Classes into which the Exhibition was divided. Presentation Copy, published in 1852. The reports were compiled by experts in the fields and are often quite detailed. Item 39. $2,250.

Item 73 is a collection of manuscript and printed documents, drawings, and photographs relating to the construction of the Ashio Railway in Japan. This was a challenging undertaking as it had to travel through deep valleys subject to periodic flooding. The construction took place from 1898-1912. The end of the line was the Ashio copper mine, for centuries Japan's largest source of copper. It dated back to around 1600. Production was ramped up in the late 19th century, with the mine producing 39% of Japan's copper at the time. Back then, copper had to be pulled out by horses, supplies brought in via the same route. Naturally, a railway was far more efficient, connecting to existing lines. There was a downside to the increased production - environmental disasters that severely harmed fishermen and farmers in the area. The mine continued in operation until 1973. $7,500.

*To see John Herschel's photograph of his father's telescope, go to page 2.