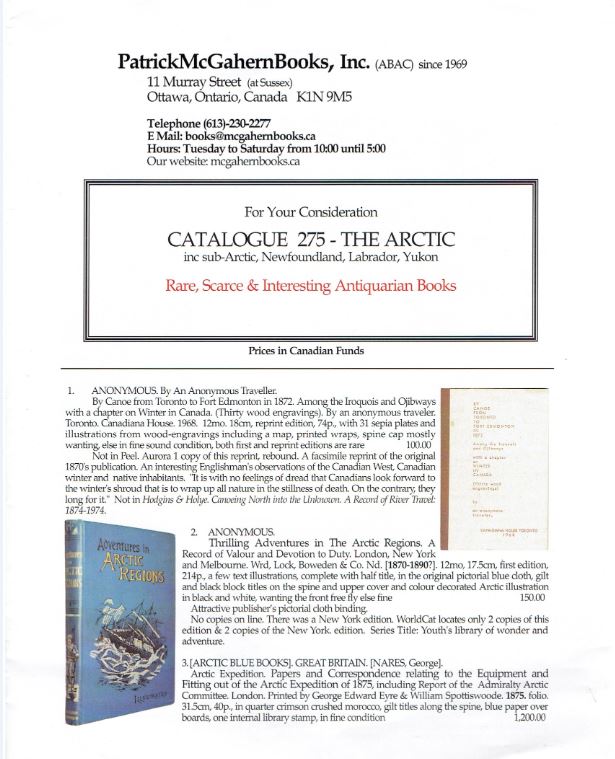 The Arctic from Patrick McGahern Books.

Patrick McGahern Books has issued their Catalogue 275 - The Arctic, including sub-Arctic, Newfoundland, Labrador, Yukon. McGahern is a Canadian bookseller, located in Ottawa, or the southland to most of the writers of the books in this catalogue. It is filled with the adventures of explorers who were not afraid of the cold. Most aimed their ships to the far north, but a few went far south, where if anything, it is even colder. They were brave, foolhardy, or both. Here are a few of these books.

I could never understand how Canadians dealt with the cold until I saw this quote from By Canoe from Toronto to Fort Edmonton in 1872. I think the author, identified only as "An Anonymous Traveller," must have had to carry his canoe overland part of the way to pull that off. He was an Englishman who undertook this challenging journey. This is a 1968 facsimile reprint of the original edition. Here is how he explained Canadians' tolerance for the cold - "It is with no feelings of dread that Canadians look forward to the winter's shroud that is to wrap up all nature in the stillness of death. On the contrary, they long for it." The author writes about the Canadian West, its inhabitants, and, of course, Canadian winter. Item 1. Priced at CA $100 (Canadian dollars, or approximately US $74).

This 220-page manuscript comes from a most remarkable woman. She has been described as the first woman to participate in a scientific expedition to the far north. She was also an author, playwright, and novelist. One more thing - she was involved in a scandalous affair with Victor Hugo, for which she did time in prison. More about that in a minute. In 1838, Léonie d'Aunet embarked on an expedition to Spitzbergen in far northern Scandinavia under the command of Joseph Paul Gaimard. She managed to accompany the expedition in return for convincing her soon-to-be husband, painter Francois-Auguste Biard, to participate as the official artist. The manuscript is a world gazetteer (without maps), undated but from 1838, signed "Leonie L.L.D.," and headed Geographie Pittoresque et Descriptice par Bandes. It describes the Arctic, along with areas not part of her 1838 journey, such as Greenland, Alaska, Russia, and the area north of Hudson Bay, but there is much on Spitzbergen and others who have explored there. In 1854, she published a book about her trip which was reprinted at least nine times. She published several novels or plays during the same decade. As for Victor Hugo, she began an affair with him in 1843. In 1845, they were captured in the act. D'Aunet was sent to prison for two months, six more in a convent. Hugo received neither. He was a respectable peer. Hugo had a wife along with a favored mistress with whom he had a 50-year relationship. His relationship with d'Aunet ended when he went into exile after Napoleon III's coup in 1851. Item 6. CA $12,000 (US $8,896).

Now we head to the bottom of the earth. Ernest Shackleton wasn't the first to reach either pole, so he did not garner quite the fame outside his native Britain as he deserved, but he was as tough as they come. Item 28 is Shackleton's The Heart of the Antarctic. Being the Story of the British Antarctic Expedition, 1907-1909, published in 1909. This was the second of Shackleton's four expeditions to the southern continent, the one in which he and three companions made an attack on the South Pole. It was the farthest journey south up to that time. They made it to within 97 miles before being forced back. It was a tough trip. Shackleton chose to use ponies rather than dogs to pull the sledges, a mistake in hindsight as all of the ponies died. The men had to pull them by hand. It took longer than expected and supplies ran dangerously low. They had to turn back as a result, surviving on little more than starvation rations on the painful trip back. They made it back on the last day their ship was scheduled to wait for them before leaving the icy waters as winter began to arrive. Item 28. CA $800 (US $593).

This is an account of a journey north with the leader who was first to reach the North Pole (though that claim is subject to some debate). Item 5 is With Peary Near the Pole, by Eivind Astrup, published in 1898. However, Astrup was not with Peary when he reached the Pole in 1909. Astrup died in 1895 at the age of 24. Rather, he accompanied Peary on his Greenland expeditions of 1891 and 1893. This is the first English language edition of a book known in its original Norwegian as "Among the Neighbors of the North Pole." It includes photographs, sketches by the author, and maps. It contains much information on the Eskimos of the region, their religion, arts, hunting, whaling, etc., along with an account of his and Peary's sledge journey across the icecap. On the second expedition, Astrup became very ill, apparently from eating bad pemmican. Back home, he went on a ski trip alone around Christmas 1895 and died under uncertain circumstances. CA $450 (US $333).

Here is an expedition north from someplace other than Canada, Greenland or Scandinavia. Item 32 is Narrative of an Expedition to the Polar Sea, in the Years 1820, 1821, 1822, & 1823. Commanded by Lieutenant, now Admiral, Ferdinand von Wrangell, of the Russian Imperial Navy. This is the first English translation, published in 1840. Von Wrangell was sent to explore the Russian Arctic. He sailed along the Arctic coast to Nizhnekolymsk, and from there, sailed and traveled by dog sledge to explore inland. He would then travel north again over ice. His account includes information about the natural history and the natives of this hostile environment. CA $2,500 (US $1,854).