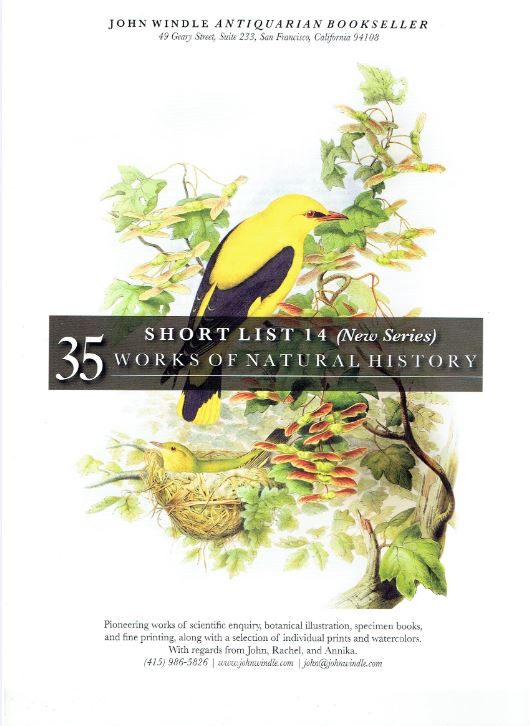 John Windle Antiquarian Bookseller has issued a catalogue of 35 Works of Natural History. It is described in more detail as Pioneering works of scientific enquiry, botanical illustration, specimen books, and fine printing, along with a selection of individual prints and watercolors. When natural history is combined with artistic illustration, two things come to mind - birds and flowers. There are lots of books and prints featuring birds and flowers. However, that is not an exclusive. Many other representatives of the plant and animal kingdom can also be found. There are animals that walk and swim, pedestrian plants that will heal your ills. And, there are the scientists who discover all of the amazing things to be found in the natural world. Here are a few samples.

We begin with one of the flower books, the handiwork of an artist not well known, but who has become highly respected for the quality of her work. Clarissa Munger Badger was an artist who specialized in flower drawings. Her father had been a portrait painter and both of her siblings were artists. Her husband was a notable clergyman in his day. Clarissa Badger published three books of her flower paintings, each about a decade apart. They were accompanied by poetry, first by others, but in this her final book, mostly by herself. The title is Floral Belles from the Green-House and Garden Painted from Nature, published in 1867. It contains 16 hand-colored plates. They were painted over faint lithographed lines, leaving the impression of original watercolors. Mrs. Badger did all the coloring herself. A contemporary reviewer described the book as "without exaggeration, a most unique, highly artistic and gorgeous affair - a work that reflects great credit on the artistic taste of the country, as well as on the genius and industry of the author." Item 1. Priced at $5,500.

Next is the most significant book in the field of natural history ever published. Windle goes so far as to describe it as "the single most important scientific book ever published." Some may argue for Einstein or Newton, but as biologist Ernst Myer pointed out, "the intellectual revolution it caused and the impact it had on man's concept of himself and the world were greater than those caused by the works of Copernicus, Newton, and the great physicists of more recent times..." This could only be one book, On the Origin of Species by Means of Natural Selection by Charles Darwin. This is a first edition from 1859 of this monumentally important and controversial book, whose conclusions some still find difficult to acknowledge. A total of 1,250 copies of the first edition were published, which quickly sold out. This copy carries the inscription of George Stuart White, Captain of the 92nd Highlanders (British Army) dated 1865. Item 5. $87,500.

Here is a letter from a man who was enormously influential on Darwin. His name was Charles Lyell, an eminent geologist, contemporary and friend of Darwin, who could never quite bring himself to fully accept his friend's conclusions. It was written in 1841 when the British geologist was on a tour of America. The letter was addressed to American geologist William Barton Rogers. In it, Lyell informs Rogers of his travel plans to various cities in Virginia and North Carolina. Most are mentioned in his account of his first journey to America, Travels in North America, published in 1845. Lyell was primarily noted for his promotion of the theory of a uniform rate of geologic change throughout the ages. This was significant because geologic changes at present occur very slowly. It meant the formation of geologic features took a very long time, in turn implying that the earth must be very old, nothing like the 5,000 years Archbishop Usher concluded from his chronology of the Bible. This was important for Darwin as evolution by natural selection could not happen in Usher's short time frame, but was possible under Lyell's long time range. Lyell urged Darwin to publish his theory, but he was a deeply religious man who struggled with the concept of humans evolving from lower species. Item 17. $1,500.

Speaking of lower forms of life, algae is not all that advanced, and is not generally seen as particularly attractive either. However, the samples in this book may at least force you to reconsider the attractiveness part of that equation. Item 10 is Algae and Corallines of the Bay and Harbour of New York, Illustrated with Natural Types, by Charles Durant, published in 1850. This book contains 40 leaves of 195 mounted specimens. It is quite a rarity. Only 50 copies were printed, but of them, it is estimated about 15 alone had the mounted specimens. Thirteen of these copies are now housed in institutions. The original price was $100 per copy. Durant is better known as the first American to fly in a balloon, accomplished before thousands in New York in 1830. He dropped copies of a poem he wrote about flight to the crowd below. There had been an earlier flight in America, but that was manned by a Frenchman. After his marriage in 1837, his wife made him give up his dangerous hobby. Instead, he took up collecting seaweed. A contemporary press report stated, "Mr. Durant has waded at least a thousand miles in the waters of New York Bay to procure these specimens, and has expended upwards of two thousand hours in their preparation." This copy is inscribed by Durant's daughter, Emma, and contains a two-page letter from her to "an appreciative friend of the author," saying this is "the last copy of the book I know of." $8,750.

John Gould was the Audubon of Britain, though he also did illustrated bird books of many other lands. His home country book is his most notable, The Birds of Great Britain. It was issued in parts from 1862-1873 and is bound in five volumes. This is a first (and only) edition with a first issue of the highly desirable snowy owl plate. It contains 367 hand-colored plates. Gould noted in the introduction that he had employed almost all of the colorists in London to complete it. Item 12. $69,500.