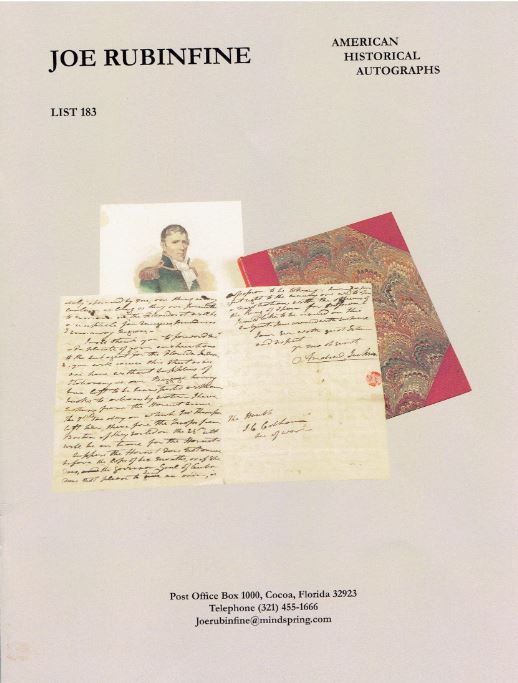 Joe Rubinfine has released List 183 of American Historical Autographs. You know this will be highly collectible American material when you see items from Washington and Lincoln. However, if those presidents are not your cup of tea, you can also find items from the likes of Benjamin Harrison, Rutherford B. Hayes, and Herbert Hoover. They aren't on Mt. Rushmore, but they could be in your collection. Along with presidents, you will find other cabinet and high ranking officials, many military leaders from the Revolutionary and Civil War, a bunch of people who did not consider themselves United States of Americans for a while (Confederates), and scattered others, such as New Orleans ladies of the night. You might prefer to spend an evening with one of them than with Andrew Johnson. Here are a few selections from this latest group of American autographs.

We start with a letter between Confederate Generals, one requesting assistance of another in having a third general replaced from his position of command by a fourth general. The problem was that the fourth general was the son of a fifth general, who needed to be convinced of the change without showing favor. Got that? The letter writer was Gen. William N. Pendleton, the recipient Gen. P. G. T. Beauregard. Pendleton wanted Gen. William H. C. Whiting removed from command at Wilmington, North Carolina. Whiting had actually done a good job of fortifying Ft. Fisher at Wilmington, the last open Confederate port where supplies could be brought in past the Union blockade. Whiting had long been close with Beauregard, but a few months prior to this Sept. 17, 1864 letter, he had not performed well on a side mission to assist Beauregard which perhaps led Pendleton to believe he could get Beauregard's assistance. Whiting had a habit of criticizing other generals, which did not make him the most popular man among his peers. Writes Pendleton, "Gen. Lee expressed to me his perplexity respecting a reliable Commander of Wilmington, it being notorious that Genl Whiting does not enjoy the confidence of the Army or Country...which renders it extremely unsafe for an important point to defend, at a critical time, upon his efficiency." Pendleton had the perfect candidate for Whiting's replacement - Gen. Robert E. Lee' son, Gen. Custis Lee. Robert E. demurred, saying he could not recommend his own son on account of their relationship, also noting that Custis did not have sufficient experience. Nonetheless, Pendleton pushed forward, evidently without success, as Custis Lee was not given the command. Whiting stayed on through a successful battle in December, but was then replaced by Gen. Braxton Bragg. Bragg, to Whiting's dismay, lost the fort the following month. Whiting returned to the fort, not as commander but to be with his men, was injured, taken prisoner by Union forces, and died in custody two months later. Item 12. Priced at $2,000.

Things were tough enough for poor Herbert Hoover in 1931. As President when the Great Depression arose, he was highly unpopular, heading for a shellacking in the election the following year. Now, he was called on to give a dedication for another President with a tarnished reputation, Warren Harding. Poor Harding was noted for the Teapot Dome scandal and a terribly corrupt administration. He was not corrupt himself, but way over his head in the presidency and taken advantage of by friends and associates. In his address at the dedication ceremonies for the Harding Memorial in Marion, Ohio, Hoover alludes to this unfortunate situation. He relates, "Warren Harding had a dim realization that he had been betrayed by a few of the men whom he had trusted...whom he had believed were his friends..." Hoover had accompanied Harding on his western trip in 1923, where the President suffered a fatal heart attack, so he had some understanding of what Harding surmised by then. Hoover went on to praise Harding personally, saying, "He was a man of delicate sense of honor, of transcendent gentleness of soul...of passionate patriotism...of deep religious feeling...devoted to his fellow men." Item 24 is a printed transcription of Hoover's address, signed by him while President. $2,000.

There were no first ladies among this group, though they may have been first in the hearts of their country-men. The Blue Book was sort of a guide to New Orleans, containing ads for bars, attorneys, cigars and a taxi service. However, it is unlikely the average reader bought his copy to find out where to buy a good cigar. What distinguished this guide was that it provided addresses for ladies who plied their trade in Storyville, New Orleans' red light district. The guide provides the ladies' names, addresses, and pertinent details, even their race. Don't plan on putting this guide to practical use today. These women would all be well over 100 years of age if still living, which undoubtedly none are. This is a 1915 edition, the last year The Blue Book was published. Item 41. $2,800.

Andrew Johnson was a man with many difficulties in his life. His unexpected presidency, the result of Lincoln's assassination, did not go well. His loyalty to the Union was based on his dislike of southern plantation owners, not sympathy for the slaves, so when he took over the presidency just as the war was ending, he was quickly at loggerheads with the northerners in Congress. Johnson's obstinate manner and unwillingness to compromise prevented him from being able to successfully work together with Congress. All of this is well known, but less well known is that Johnson's family life was also filled with troubles. His wife, youngest son and son-in-law were ill, likely with tuberculosis, while his two older sons were alcoholics (only his two daughters were okay). Item 28 is a letter from Johnson while a Senator from Tennessee in 1859, six years before becoming President. Rubinfine says it was almost certainly written to his eldest son, Robert. Johnson talks of various political happenings, but the primary concern is evidently directed toward the middle son, Charles. Johnson had received letters from his wife and Robert concerning the situation. "The account given in both of them of your brother," he writes, "was extremely mortifying to me yet I was anxious to know the true State of the Case. Your mother Seemed to think I might be prepared for the worst for She feared it would end in his death, which has Kept me in suspense ever Since. Before this there must be a change Some way either for the better or for the worse. Let that be as it may I have been extremely anxious to hear what the change was. I hope of Course it is for the better. I am Sure it cannot be much worse." Apparently, the Johnsons survived whatever the current episode was, but unfortunately there was no long term solution. Charles, serving as an assistant surgeon during the war, was thrown from a horse and died in 1863. Apparently he was inebriated. The older son and letter recipient, Robert, committed suicide in 1869, unable to overcome his own alcoholism. As an aside, I have no idea what guidelines Johnson used for determining capitalization. Item 28. $7,500.

Here is another presidential poor health letter, though hardly on the same tragic level as that of Johnson. It was written by William Howard Taft, formerly President, now Chief Justice of the Supreme Court, in 1927. He was then just a few weeks from his 70th birthday and his health was declining. Taft was never known as a fit man, once reaching a weight of 340 lbs. during his presidency. However, in his post-presidential years, he took fitness and diet more seriously, eventually lopping almost 100 lbs. from his weight. Like many presidents, Taft got much of his exercise playing golf. Here he writes from Quebec to J. L. Ketterman, apparently a golfing companion, that he can play no more. Says Taft, "I have had to give up golf during the last three years and never expect to take up the game again. My physician forbids." Item 46. $1,500.