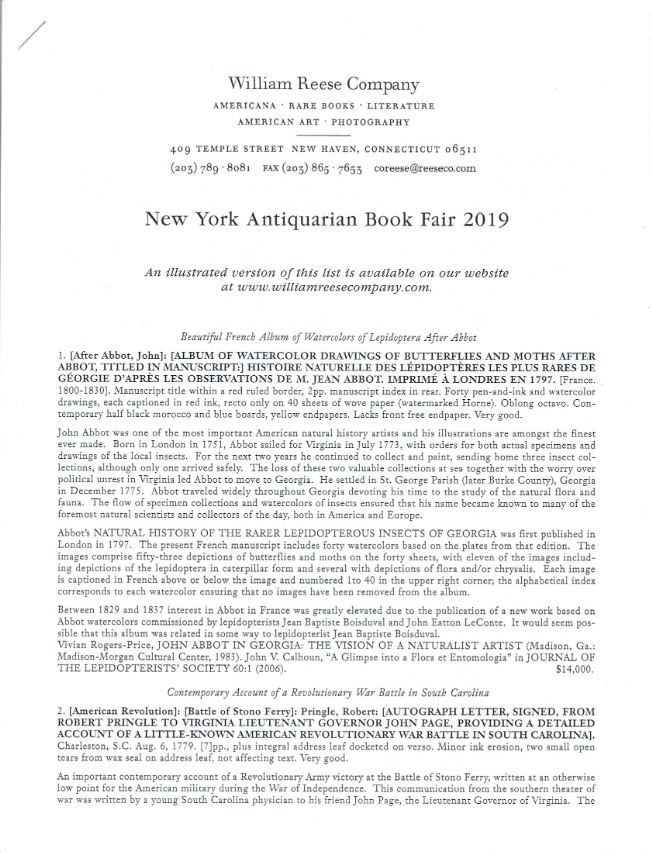 The William Reese Company has published a detailed list of items displayed at the recent New York Antiquarian Book Fair 2019. Reese's primary specialty is Americana, and most of these items fit within that category. Some extend to the other side of the United States border, but most items pertain to someplace in the Western Hemisphere. We will begin with a couple of fascinating personal letters before turning to more traditional printed material.

There is no more important name in American history than that of the writer of this letter. Item 81 is a sad letter from the father of his country, George Washington. The letter, written on April 20, 1773, is to close friend Burwell Bassett, who was married to Martha Washington's sister. He had heard a short time ago of the death of Bassett's daughter, Elizabeth. Writes Washington, "...the ways of Providence being inscrutible, and the justice of it not to be scand by the shallow eye of humanity, nor to be counteracted by the utmost efforts of human Power, or Wisdom; resignation, &, as far as the strength of our reason & religion can carry us, a cheerful acquessance to the d[vi]ne will is what we aim at..." Washington goes on to discuss some business matters and then some of his own family difficulties. Martha Washington's son, Jack (John Parke Custis) had announced his engagement to Eleanor Calvert. He was but 18 years old and not very mature. Washington feared (correctly so) that it would lead to Jack's discontinuing his studies. However, they did manage to have seven children before Custis came down with one of the illnesses that proved more deadly than war itself at Yorktown in 1781. Ironically, he was taken to Bassett's home, where he died. Eleanor remarried and lived another 30 years, enough time to have 16 more children (yes, 23 in total). Priced at $37,500.

Next we have a letter between two American Revolutionary War patriots who became close friends while serving as aides to the aforementioned Gen. Washington. The writer is Alexander Hamilton, who needs no introduction. The recipient was Henry "Light Horse Harry" Lee, maybe not quite as well known today since no one wrote a play about him, but an important leader in his day. Lee gave the best-remembered eulogy for Washington, still familiar today - "first in war, first in peace, and first in the hearts of his countrymen." Light Horse Harry was also the father of the not quite so patriotic American Robert E. Lee. The two would serve Washington again by leading forces to put down the Whiskey Rebellion. This letter was written in 1793, while Lee was Governor of Virginia and Hamilton was Secretary of the Treasury, another bit of irony here. In 1791, Lee had gifted his friend with a fine horse, but Hamilton insisted on paying for it. However, by this time, the man responsible for the U. S. Treasury could not remember whether he had paid Lee as promised. Hamilton writes Lee asking he remind him whether he paid his debts, alluding to the embarrassment of a Treasury Secretary not knowing whether he had fulfilled his personal financial obligations. Says Hamilton, "Pray resolve my doubts. For a man in my situation ought at least to take care how he fails in his pecuniary duty. I look back with mortification to the little attention I was able to pay you while here." Item 37. $12,500.

If you are ready for a road trip from the Midwest to California, here is the guide you need - Horn's Overland Guide, from the U. S. Indian Sub-Agency, Council Bluffs, on the Missouri River, to the City of Sacramento, in California. No, the answer isn't to hop on I-80 and keep driving west until you get there. This was 1852, and you needed to fill your wagons with supplies, bring your guns for protection, and be sure to follow the map carefully because if you got lost, you probably never would come back. This guide was prepared by Hosea B. Horn, and he knew the route better than most as he had traveled it extensively. His guide not only shows the main route, but all of the cut-offs as well. Unlike the typical guide, Horn provided the locations of numerous objects and places, and the mileage between them, to reduce the chances of travelers getting lost or running out of supplies. This guide was noted as one of the best produced for those seeking their fortunes in California. Item 40. $7,500.

Item 80 is a contemporary account of the greatest slave revolt in American history, though it does not reflect the viewpoint of the slaves. The title is Authentic Narrative of the Tragical Scene which was Witnessed in Southampton County (Virginia) on Monday the 22nd of August Last, when Fifty-Five of Its Inhabitants (Mostly Women and Children) Were Inhumanly Massacred by the Blacks! by Samuel Warren, published in 1831. This rare pamphlet is an account of Nat Turner's rebellion from a white perspective. Nat Turner was a slave who had a vision that he was called on to rise up against the brutality from which his people suffered. He believed his calling was to fight fire with fire, that only a brutal response would make clear what life was like for the slaves. Turner and his followers went from house to house, indiscriminately killing most whites they found. The rebellion lasted for two days, and white mobs responded with similar violence, killing many more blacks, regardless of whether they were involved in the rebellion. Many of the blacks were punished, including executions, though none of the whites were. Turner was the whites', and particularly the slave owners' worst nightmare. Some Virginians, notably Thomas Jefferson's grandson, saw this as a warning and proposed bills to gradually bring slavery to an end. Ultimately, most in the South chose to defend slavery more vigorously, a decision that proved to be futile. $13,500.

Seven score and fifteen years ago, Abraham Lincoln gave perhaps the most historic speech in American history. It was not recognized at the time. It was short, short enough for generations of schoolchildren to memorize in its entirety, but powerful enough to be moving to Americans generations later. On November 19, 1863, President Lincoln traveled to Gettysburg to consecrate the cemetery for the soldiers who fell at that battle four and one-half months earlier. However, his short speech was something of an afterthought that day. The main address was given by Senator Edward Everett, considered the greatest orator of his day. His speech went on for almost two hours, while Lincoln's lasted but a few minutes. Item 49 is An Oration on the Battlefield of Gettysburg, (November 19, 1863), on the Consecration of the Cemetery Prepared for the Interment of the Remains of Those Who Fell in the Battles of July 1st, 2d, and 3d, 1863, by Edward Everett. The first printings of the events at Gettysburg featured only Everett's address. Lincoln's first appeared in a 16-page pamphlet. Item 49 is the first printing in book form of Lincoln's Gettysburg Address. It appears on page 40 of 48, after Everett's leading, albeit forgotten, speech. For the record, Everett's speech was well-received when delivered. $60,000.